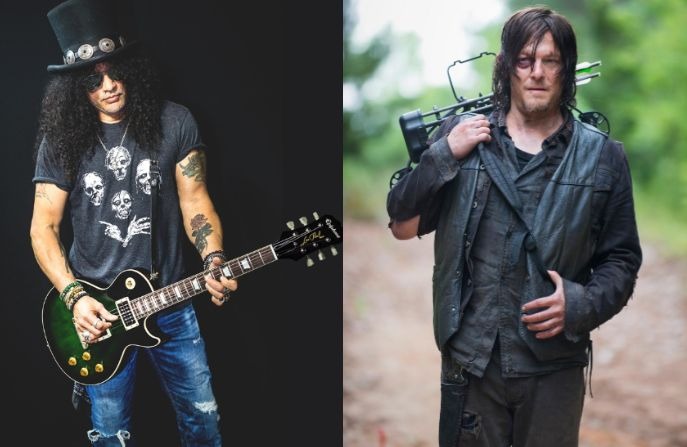 It may seem incredible, but Slash offered a song to be used on The Walking Dead track, but it was rejected by the series producers!

He tells the story during a conversation with the podcast ¨Basel Meets¨, which happened in late November when Guns N ‘Roses performed in the United Arab Emirates, in a part where they are talking about the song ¨The One You Loved Is Gone¨, that is on the album “Living The Dream”, the most recent work by Slash Feat. Myles Kennedy and The Conspirators.

“We never discuss the subject of the lyrics, whenever we write something I bring some simple arrangement or ideas for the song and Myles arranges the melodies, from there we work on the song with the other guys, and in the studio is that finally the lyrics appear”, Slash begins . “The lyrics come from completely different places from where the ideas of the songs come from.”

He continued: “In the beginning the music was inspired – believe it or not … I wrote the intro for ‘The Walking Dead’, at that time the series had no music beyond the incidental track, and I tried to get them to play something original and unique, but they did not buy my idea, they said that because it was a song of mine they did not want a well-known name to be part of the world of ‘The Walking Dead’

“So it did not roll, but as it was a very good musical idea I introduced it to Myles intending to do something on his own for ‘The Walking Dead’ and he had some melodies, but the lyrics turned into something completely different when it was recorded.”

Finally, Myles still makes a curious revelation: “It seems that in the lyrics I’m singing about a lost romance or anything involved with relationships, but actually the lyrics are about a dog I lost, he stayed at my parents’ house when I started to tour, it was a crossing of Chow Chow with Golden Retriever and his name was Cinnamon, he was a bit old and died, but he was a big dog. So this is it, the song is about Cinnamon! ¨.