Guitarist Slash spoke in an interview with Yahoo! Entertainment, about allegations that the lyrics of some Guns N ‘Roses songs are sexist in content. Songs like “Used To Love Her” and “Back Off Bitch”, among others, are often cited as examples of compositions whose lyrics degrade women.

At first Slash said he had never thought about it, but came to reflect a bit after moves like #MeToo, where women expose social networking, harassment and sexual abuse, and Time’s Up, in which famous actresses report cases of the kind involving Hollywood big names. Then the guitarist admits that Guns N ‘Roses has some sexist lyrics, but believes the compositions were not meant to be taken seriously. 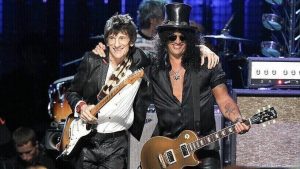 “I’ve never thought of that. It’s never crossed my mind,” he told Yahoo! Entertainment. “I mean, I think when the #MeToo thing really blew up, the thought crossed my mind of a bunch of musicians, not particular ones, but just musicians [who might be implicated]. But for the most part, as far as all the ones I know, it wasn’t like that. We didn’t have that particular [predatory] relationship with girls. It was a lot more the other way around in some cases. Anyway, so some of the songs and all that were sort of sexist in their own way, but not to be taken that seriously. I don’t think they were malicious or anything.”