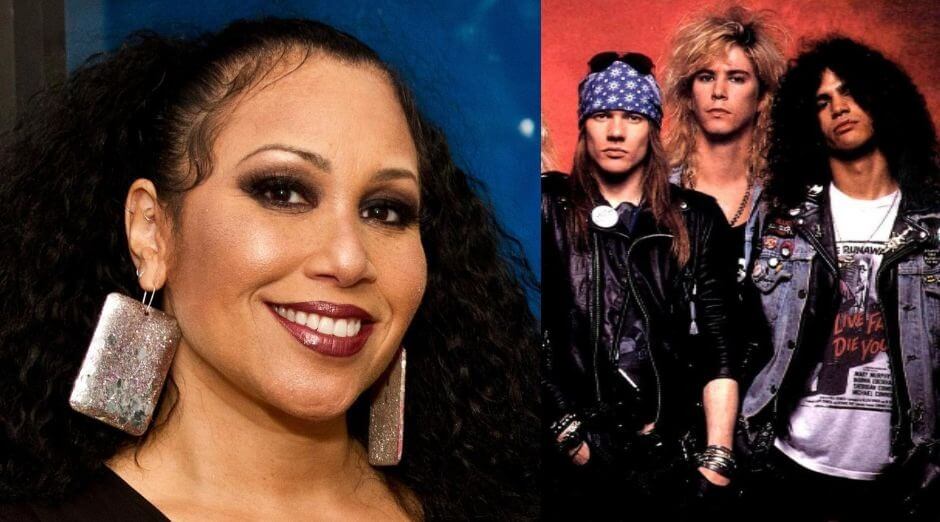 The veteran backup singer Roberta Freeman revealed the details of life on the road with Guns N’ Roses and Pink Floyd in an interview with Rolling Stone. She first told how she started singing with the progressive rock band then with Cinderella and Guns N’ Roses during the 1991 Use Your Illusion tour.

You sang with Pink Floyd for three nights in 1987 at the Omni Coliseum in Atlanta. How did that wind up happening?

“I had been working on a Nile Rodgers projects with Lorelei McBroom and her sister Durga. What happened was that David [Gilmour] wanted to film the performances for a concert movie. They had Margaret Taylor and Rachel Fury in the band already, but they wanted, basically, more women onstage. They wanted women on both sides of the stage instead of just one side.”

“It blew my mind when we got the call. As a teenager, I would go asleep listening to “The Great Gig in the Sky” and the whole Dark Side of the Moon album. I had to pinch myself several times. I absolutely loved Pink Floyd. But I wasn’t really familiar with the new album [A Momentary Lapse of Reason]. When I was on the plane, I was listening to the album and learning the songs. I was just like, “Oh, my God.” Once we got there, we started rehearsing and I remember going over the vocal parts backstage. David was like, “You sound ready to me. Let’s go.”

What were the most memorable songs you sang on at those shows?

“On the Turning Away” was my favorite. That ended up being a video along with “Dogs of War” and “On the Run.” They were on MTV regularly. That’s just one of my all-time favorite songs anyway. Whenever I hear that song, I get this warm, fuzzy feeling inside.

How did you wind up with Cinderella on their Heartbreak Station tour?

“A friend of mine told me about auditions. I sent in my headshot and résumé. They told me when I got to the auditions that they almost didn’t chose me to audition because I didn’t look black enough. I’m multi-racial. My mother is an Eastern European Jew and my father was black and Native American. People have always wondered what my background was. This was typical to rock & roll.”

“I’m not saying anything bad to those guys. I love those guys. But at the time, to have background singers for a hair band was unheard of. The only people to have done it at the time were Mötley Crüe. Cinderella were the second guys that did it. They wanted some soul sisters and I didn’t look soulful enough. But when they met me and I sang they were like, “Oh, yeah. She’s soulful.”

On the road with Guns N’ Roses 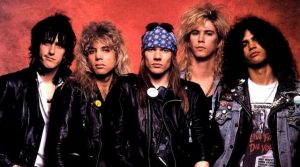 Was it just you?

“They hired me and Diane Jones. We ended up doing the entire tour. It was a blast. I had such a great time. Those guys were like brothers to me. I really loved them. Apparently, [drummer] Fred Coury was really good friends with Slash. So when the Heartbreak Station tour ended, Slash told Fred that Axl wanted to try and have females in the band. Fred was like, “We are done with our tour. Why don’t you ask Roberta if she wants to do it?”

“That is how that came to be. By the time I was called by Slash, I had already been working consistently with all these substantial artists. I was, of course, thrilled to get the call from Slash, but it wasn’t the shock that some people think it might have been. The thing that surprised me more was that they wanted females. Until then, only Mötley Crüe and Cinderella had done that in that genre. I had heard about their reputation and I was prepared for a rough road of misogyny.”

“Yeah. Well, the thing about that is that I had never performed that song [Guns N’ Roses – “One in a Million”] with them. I had heard about the song. Honestly, I was so overwhelmed because when I was hired, Slash was basically like, “Just do what you want to do. We don’t have any background parts, really. I want you to be in charge of hiring the girls to sing background with you.” I was in charge of the choreography and all the vocal arrangements and the hiring.”

“I ended up choosing Traci Amos. When she took a small hiatus, I brought in Diane Jones to cover for her. It was a lot of stuff that I was thinking about. I wasn’t trying to overthink the job. So I only knew that I wanted to do the best job that I could. I had a lot on my plate to concentrate on.”

“When I did hear the song, because of the way Axl treated me, which was with the utmost respect … he was always really sweet. I didn’t get a racist vibe from him, honestly. I figured, “Maybe that song is from the standpoint of racist America or something.” I kind of dismissed it.”

“I’ve also heard it said that they called people out when they were being racist. And he has black band members and he has black people onstage with him. He has black crew members. I didn’t get that vibe from Axl at all. I really didn’t.”

They’d just recorded two fairly complex albums. Tell me about the process of helping them transfer them to the stage. 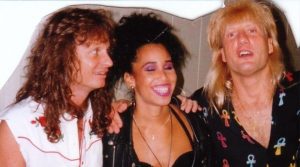 “Well, I basically just went on my instincts. The songs that I arranged background vocals for were the songs that I heard in my head. I could hear the backgrounds in my head. It just seemed to make sense to me. There were some songs that already had backgrounds on them. The one with the most was “Knockin’ on Heaven’s Door,” so that was a no-brainer. But I did add my Roberta to that mix. I added a little solo in there, I must admit.”

“At one point, I thought I was getting in trouble for overdoing it on that solo. As the tour went on and on, I wanted to add my flavor and I’d stretch my little solo more and more. At one point, management came up to me and said, “You’re kind of doing too much there. We need you to take it back.” I think they were having that conversation with me because it was hard to read Axl. He really didn’t have a lot of communication. I think they were just trying to make him happy. Funny enough, Axl overheard the conversation that I was having. He stepped in and said, “Roberta, I love what you’re doing. Keep it up.”

That must have made you happy.

“I was really pleased because up until then I had not gotten a lot of feedback from Axl. It’s a camp. I don’t know how it is now, but at the time he was kind of kept separate from the other band guys. It was hard to get in to talk to him. He didn’t really come to the rehearsals. So here I am, this new hire in charge of creating parts and choreography and all this stuff, and I don’t have feedback. Slash was really easygoing and like, “Look, Axl is the one who wants this. Whatever you think is right, just go with it.”

“He was totally, totally laid back, but I wasn’t getting feedback from him. When Axl didn’t show up to rehearsals, I got really nervous like, “Oh my God. What if he doesn’t show up and he doesn’t like what we’re doing onstage? I’ll have to start from scratch.” My first night of the tour, I wanted to go in with Traci and go over the parts with him and just sing them out and let him know what my plans were. But I wasn’t allowed to do that.”

“I was adamant about getting in to see him and that it was important. It wasn’t like I was going in to bother him. This was an integral part of the show that he wanted me to do. I was finally able to go in. I remember sitting there with a tape player playing the record as Traci and I sang over it. Axl was just sitting there and smiling the whole time and nodding his head. I was so pleased that my boss was pleased.”

That tour was famously chaotic. Shows often started very late. There were riots. How was all that from your perspective? Was it stressful?

“It was stressful, but I think it just kind of became the norm. We knew that if we were slated at 8 o’clock we probably wouldn’t go on until at least 10 o’clock. At least. I remember going on at midnight sometimes. We would all go get ready, put our makeup on and get our wigs and our outfits. I’d be warmed up and stay warmed up. I’d keep doing my vocal exercises and try not to get sleepy. We had a really large stage. The stage had these little dressing rooms built under the stage. We’d entertain ourselves by playing cards. We just hung out. It was a hang.”

“I didn’t choose to do parts on all the songs because I knew that would be too much. I chose a certain amount of songs to do the background vocals for. Every night, Axl called out the set list. Every tour you go on, there is a printed set list. Even if it changes from night to night, it’s printed out. That wasn’t Axl’s style. We’d be sitting there under the stage, playing cards or just shooting the shit, and all of a sudden we’d hear “November Rain” and me and Traci would run up onto the stage and start doing our thing. It was exciting and very spontaneous.”

That was a long tour. Did you get really exhausted by the end?

“It was a long tour. I think it was two years. And I did every single one of those shows. I think it was 194 shows in 21 countries. Rain or shine, we did those shows. I remember in Japan I got parasites and I couldn’t keep food down for like a month. I remember getting all ready and Axl looking at me and going, “Oh, my God, you’re green. If you don’t want to do the show, you don’t have to, Roberta.” I was like, “Nope. The show must go on. I’m going to do it.” One of the stage guys put a bucket right in back of me. You couldn’t see it on the stage, but it was there just in case I had to do what I had to do. I was terribly ill at the time.”