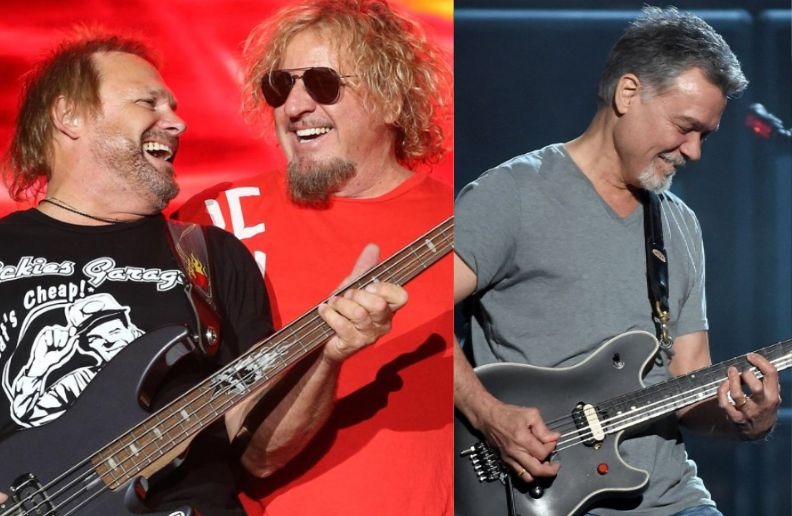 In an interview with Eddie Trunk, ex-Van Halen singer Sammy Hagar, talked about the rumours about a Van Halen reunion with Michael Anthony and revealed that they contacted Michael Anthony 6 months ago.

You’re hearing all these rumors about Michael going back to Van Halen?

“Yes, I am. And the main thing I just wanna say is that Michael Anthony is one of my dearest friends in the world. He’s my bandmate, he and I are soul brothers, we are cut from the same mold.

“And I told Mike, these are all rumors – ’cause as usual, Mike’s hearing about it through the news, just like the way he heard about when Eddie replaced him, that he was not in Van Halen anymore. He read about it instead of these knuckleheads giving him a call and being straight-up front with him.

“So Mike is still sitting in that same position, again, where all these rumors are going around. I’m sure they’re trying to put something together; whether or not it’s going to materialize, I don’t know.

“I told him, ‘Mike, if this happens, you friggin’ have my blessings. You’re gonna do this. You’re a founding member of that band.’ And for the fans, he needs to do it.

“He is the missing element. If you want my opinion, without Mike, it just doesn’t seem the same. He’s the flag-bearer. He walks out there with the flag, the VH flag, he holds it high like the guy in the cavalry.

“But the things I’ve been reading – it ain’t gonna happen if they think Mike is gonna come out and do his bass solo with his Jack Daniel’s bass, say goodbye and stand on the side of the stage and watch Wolfie [Van Halen] play his songs all night. [Laughs]

“I mean, I don’t think the fans are gonna go for that either. They’re gonna be friggin’… they’re gonna be really hard on the little Wolf, he doesn’t deserve that.

“So I don’t know what to think. Maybe it’s just a rumor, you know, those guys, they don’t tell me nothing ’cause I don’t wanna know, but I thought they’d at least tell Mike. [Laughs]”

People have said to me, ‘What would happen with Sammy? Michael and Sammy are like a unit – would Sammy be cool with that?’
“Totally cool. Absolutely. And I’m not trying to hide anything like I know something and they don’t know something.

“Mike and I have had the conversation. I’m telling you – Mike don’t know shit. [Laughs]

“They’re gonna have to eventually – somebody’s gonna have to give the guy a call. I mean, he got a call six months ago from management, saying, ‘Are you interested?’.

“He said, ‘Yeah, you know, I’m doing alright with Sammy right now, it depends. We’re booking shows, so you’d have to work around it.’ And they said, ‘OK, we’ll get back to you,’ and that was it. So I can tell you that much, but that was a long time ago.

Focusing on his own hypothetical reunion with Van Halen, Sammy said:

“I’m not looking to be part of that. The only way I would show any interest would be for to do it right.

“If we never got together onstage at the same time, I couldn’t care less about that because I don’t see any reason to jump up there and sing with Dave. So that would be for the fans only.

“And even if I needed money, I wouldn’t do it for the money; it would be for the goodness of the legacy of the band.”