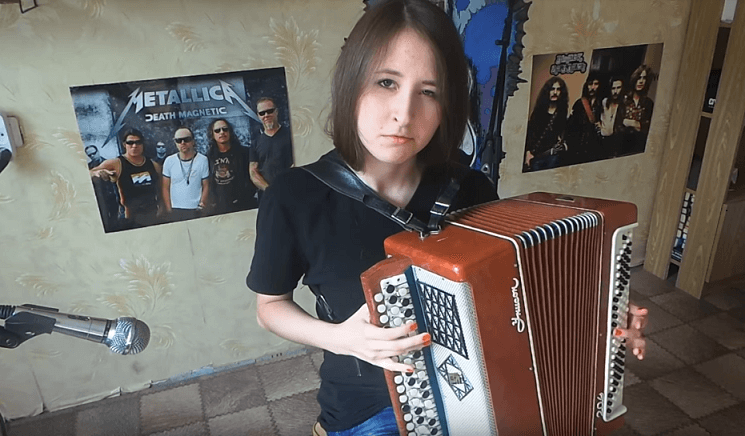 The Russian Youtuber Lady Chugun turns metal hits into covers taken on the accordion. She made awesome versions for “Master of Puppets” and “For Whom The Bell Tolls” by Metallica, as well as “The Trooper” by Iron Maiden.

The accordion’s basic form is believed to have been invented in Berlin in 1822 by Christian Friedrich Ludwig Buschmann, although one instrument has been recently discovered that appears to have been built earlier.

The earliest history of the accordion in Russia is poorly documented. Nevertheless, according to Russian researchers, the earliest known simple accordions were made in Tula, Russia by Timofey Vorontsov from 1820, and Ivan Sizov from 1830.

By the late 1840s, the instrument was already very widespread;[14] together the factories of the two masters were producing 10,000 instruments a year. By 1866, over 50,000 instruments were being produced yearly by Tula and neighbouring villages, and by 1874 the yearly production rate was over 700,000.

By the 1860s, Novgorod, Vyatka and Saratov Governorates also had significant accordion production. By the 1880s, the list included Oryol, Ryazan, Moscow, Tver, Vologda, Kostroma, Nizhny Novgorod, Simbirsk and others, and many of these places created their own varieties of the instrument.