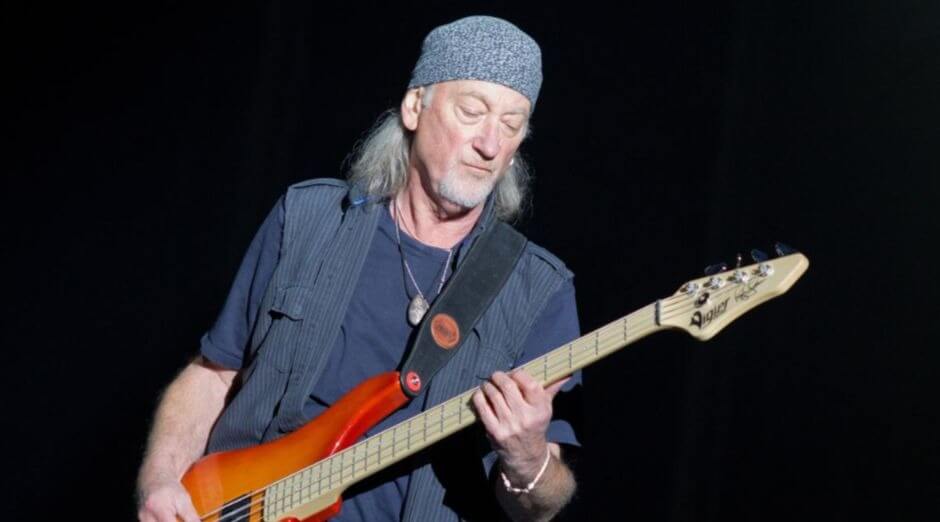 Deep Purple bassist Roger Glover talked about two classics of the band during an interview to promote their upcoming album “Whoosh!”. The musician recalled in an interview with Talkin Rock about “Smoker On The Water and “Perfect Strangers”.

“Yeah, it’s one of those riffs. The strange thing is: it came from nowhere; when that fire [in Montreux, Switzerland] stopped us recording in the Casino, we decamped to a small theater nearby.

“We only managed to do one backing track, one quick jam, and that was that riff. While we were recording it, the police rang the door and tried to stop us, we were keeping the whole town awake. So by the time we continued, it was like five days later, we were short of a song, and we were like, ‘What’s that thing we did in the other place?'”

“And that coupled with – I came with the title ‘Smoke on the Water’ the morning after the fire, we needed the song so, ‘Why don’t we write just happened to us actually?'” Roger Glover said.

You were inducted in the Rock N’ Roll Hall of Fame [in 2016]. Looking back, what are your thoughts on the induction?

“Well, having been turned down twice, we kind of got used to the fact that we weren’t wanted; actually, we weren’t wanted anyway, we never thought about it, that’s not our goal. Doing what we do is our goal; if someone wants to recognize it and awards us, that’s just the icing on the cake, but it’s not that important to us.”

“So, after we’ve been turned down twice, when it finally came, we actually considered refusing it, as we thought we’d be more published for refusing it. But then we came to the conclusion, Ian [Gillan, vocals] said, ‘It’s not for us; it’s for the fans, it’s for the family and fans, especially the fans.’ So, we did it,” Roger Glover said.

I was listening to [1984’s] ‘Perfect Strangers’ yesterday. That record came out when I was a kid, and that’s my favorite record. And you guys took a long, big hiatus before you wrote it. Talk briefly about reinventing the band in the mid-’80s.

“I wasn’t sure if it was a good idea at all because what happened in the ’70s was so amazing, and then to turn our backs and do it all over again in the ’80s, I thought was too far. But we had a meeting – the first time in 11 years that all five of us were at the same table, and the first thing we wanted to do was to play together and to see if there’s something still there, and that was the key moment.”

“We rented a house and I remember so well, the first jam we did together – it was magic. It felt so natural, and we said, ‘Yeah, let’s do it.’ That was the key. We actually recorded the rehearsal at that place with a mobile,” Roger Glover said.

I know that you produced a lot of records back in the day, how did you talk Judas Priest into covering [the 1975 Joan Baez single] ‘Diamonds and Rust’ [in 1977]?

“I didn’t; they wanted to do it. I think one of the reasons why they asked me is because they heard a Joni Mitchell song ‘This Flight Tonight.’ Which was a big hit. I produced that, and in fact, arranged it.”

“They wanted to do it; I told them, ‘I don’t know…’ They said, ‘No, if you want to do a beautiful song, you need a good arrangement.’ So I arranged it, and that was a big hit. And Judas Priest had that in mind – when you do something like that with this song. So that’s how it came about,” Roger Glover said.