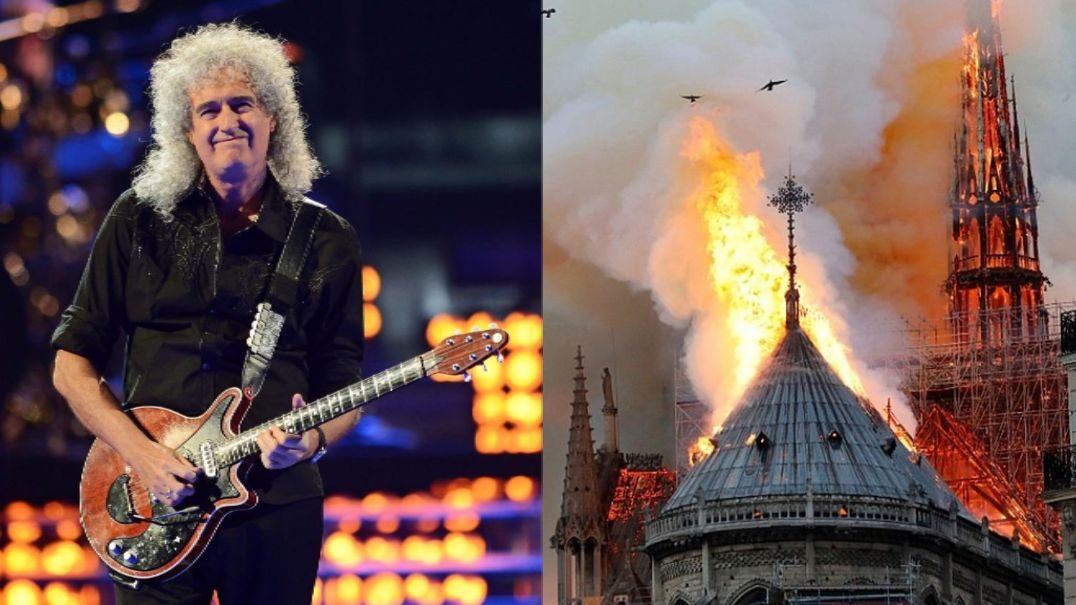 According to the cathedral’s spokesmen, the flames began around 6:50 pm (local time) and firefighters arrived a few minutes later – several statues had been withdrawn previously because of the renovation.

However, the fire caused the fall of the iconic needle at the top of the church, Europe’s most visited monument. The area was evacuated. Symbol of France, the cathedral of Notre-Dame began to be built in 1163 and 1345, underwent several reforms over the centuries and was previously struck by another fire in 1871.

Many rockstars reacted to the fire:

Heartbroken. Not finding pics from my last visit at this moment so sharing this post from a favorite musician (and a hero beyond music: guitarist/astrophysicist Brian May). My thoughts: https://t.co/9PwW5TmxA1 pic.twitter.com/ERUz8GGvRZ

Terrible news about Notre Dame, Paris. Very much thinking of the people of France.

Feel free to send me your photos from Notre Dame. Your vacations, studies abroad, honeymoons, tours, passers by. Here are some of ours from over the years. Celebrate this historic building. pic.twitter.com/mRqKDGxuHz

The cathedral was begun in 1160 under Bishop Maurice de Sully and was largely complete by 1260, though it was modified frequently in the ensuing centuries. In the 1790s, Notre-Dame suffered desecration during the French Revolution; much of its religious imagery was damaged or destroyed. In 1804, the cathedral was the site of the Coronation of Napoleon I as Emperor of France, and witnessed the baptism of Henri, Count of Chambord in 1821 and the funerals of several presidents of the Third French Republic.

Popular interest in the cathedral blossomed soon after the publication, in 1831, of Victor Hugo’s novel The Hunchback of Notre-Dame. This led to a major restoration project between 1844 and 1864, supervised by Eugène Viollet-le-Duc, who added the cathedral’s iconic spire. The liberation of Paris was celebrated within Notre-Dame in 1944 with the singing of the Magnificat. Beginning in 1963, the façade of the cathedral was cleaned of centuries of soot and grime. Another cleaning and restoration project was carried out between 1991 and 2000.