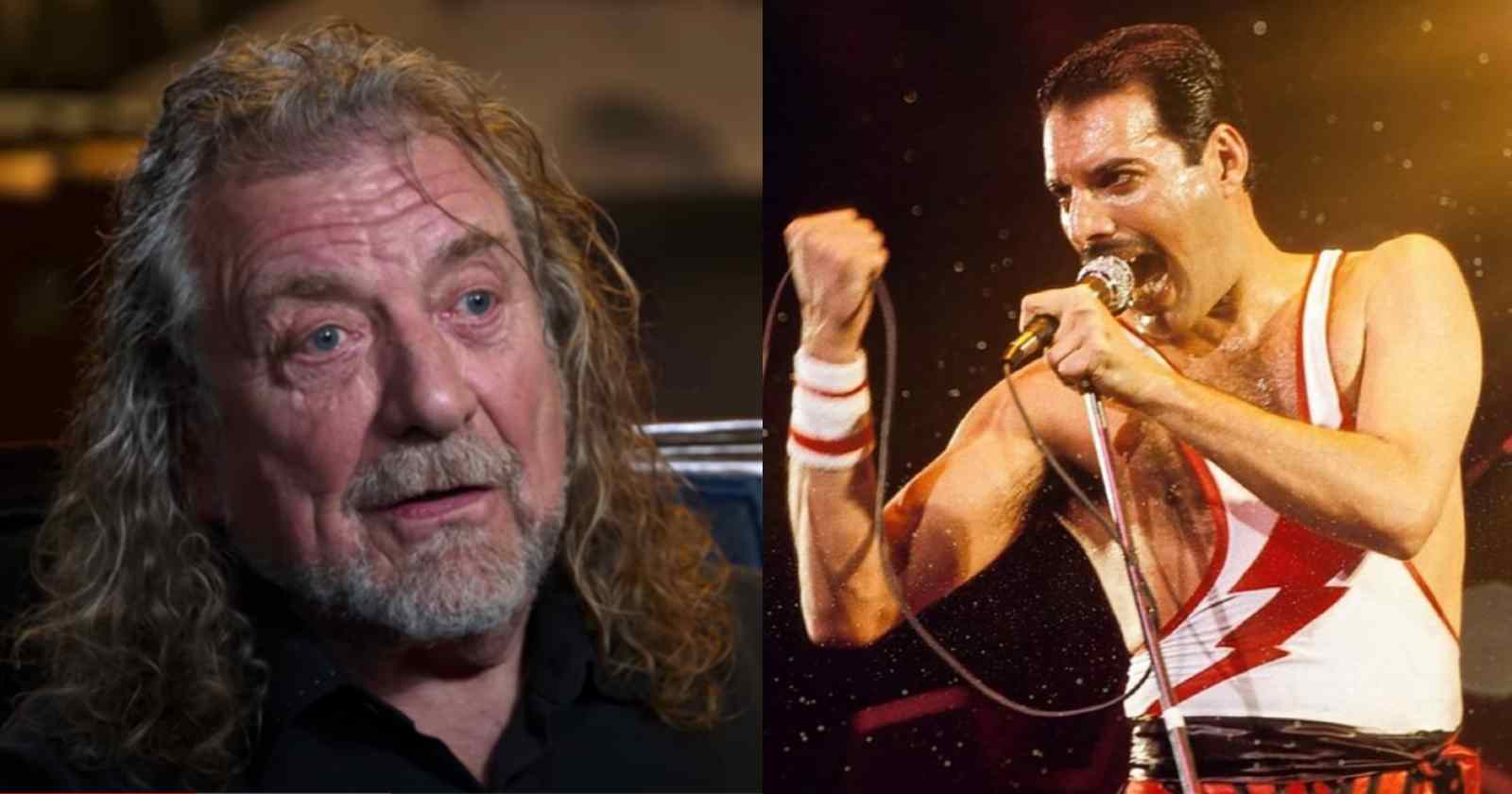 Robert Plant was one of the first Rock and Roll singers with an incredible vocal range that showed musicians all over the world what they could do with their vocals in the songs. He was an important part of Led Zeppelin‘s success, that took all the sound that Jimmy Page, John Paul Jones and John Bonham were making with their instruments to another level. Plant inspired countless singers over the decades and he gave his opinion on many of them during his career. One of them was the late legendary Queen vocalist Freddie Mercury.

What is Robert Plant’s opinion on Freddie Mercury:

Robert Plant not only admires Freddie Mercury for his incredible vocal skills but also for his incredible stage presence as he said in a quote on Mercury’s official website.  “There’s so few people behind the glamour who really make it as true performers. It’s a very strange thoroughbred condition to be a successful musician and still be able to project it with confidence. Freddie had that, and there’s not many people who have had it,” Robert Plant said.

The Led Zeppelin frontman was lucky enough to have been part of the historical Freddie Mercury tribute concert at Wembley Stadium in 1992 that gathered many famous artists. Alongside Brian May, John Deacon and Roger Taylor he performed the classic Queen songs “Innuendo” from the album of the same name released in 1991, and “Crazy Little Thing Called Love” from the 1980 record “The Game”. While playing those tracks live the band included bits of the two classic Zeppelin tracks “Kashmir” and “Thank You”.

Plant revealed in a conversation with Classic Rock in 2022 that Freddie told him that he had written “Innuendo” as a tribute to Led Zeppelin. The artist also recalled that he a problem to learn the lyrics for that show and at the end he performed with “huge lyric sheet taped to the stage”.

In an interview for the TV special (Transcribed by Rock and Roll Garage) made for the Freddie Mercury Tribute concert, Plant praised the late singer. “He was a sweet guy, great voice. A tribute and testament to him, which a lot of people won’t click and understand, a lot of people are changing the keys to these songs because they just can’t do it Freddie”.

“Freddie sang all these songs originally and he sang them better than we gonna sing them. He sang them in the correct keys, he sang them with confidence, he sang them really, really well. His personality vocally and his whole projection we can’t capture. The real thing about today is that he is not here,” Robert Plant said.

Robert Plant once said that Freddie was much better than him

In 2010, he told CBC (Transcribed by Rock and Roll Garage) that Freddie Mercury and the American singer Jeff Buckley were spectacular and “had much better chops” than him.”I mean, real great, great singers. I just get into songs and live them out, which is a different thing, I think that’s true.”

“I knew Freddie quite well and he was a wonderful guy. We used to sit and talk about what we would gonna do (when) our voices (would go away).”

In 1975, Queen had released only four albums but were already a very successful group. In a conversation with Circus magazine in that year, Freddie Mercury was asked to give his opinion on Jimi Hendrix, Liza Minnelli and Led Zeppelin. The late singer then praised all three of them, saying that Zeppelin was the greatest band of all time.

“Jimi Hendrix is very important. He’s my idol. He sort of epitomizes, from his presentation onstage, the whole works of a rock star. There’s no way you can compare him. You either have the magic or you don’t.”

“There’s no way you can work up to it. There’s nobody who can take his place. Liza, in terms of sheer talent, just oozes with it. She has sheer energy and stamina, which she gets across the stage. The way she delivers herself to the public is a good influence.”

“There is a lot to learn from her. Led Zeppelin is the greatest. Robert Plant is one of the most original vocalists of our time. As a rock band they deserve the kind of success they’re getting,” Freddie Mercury said.