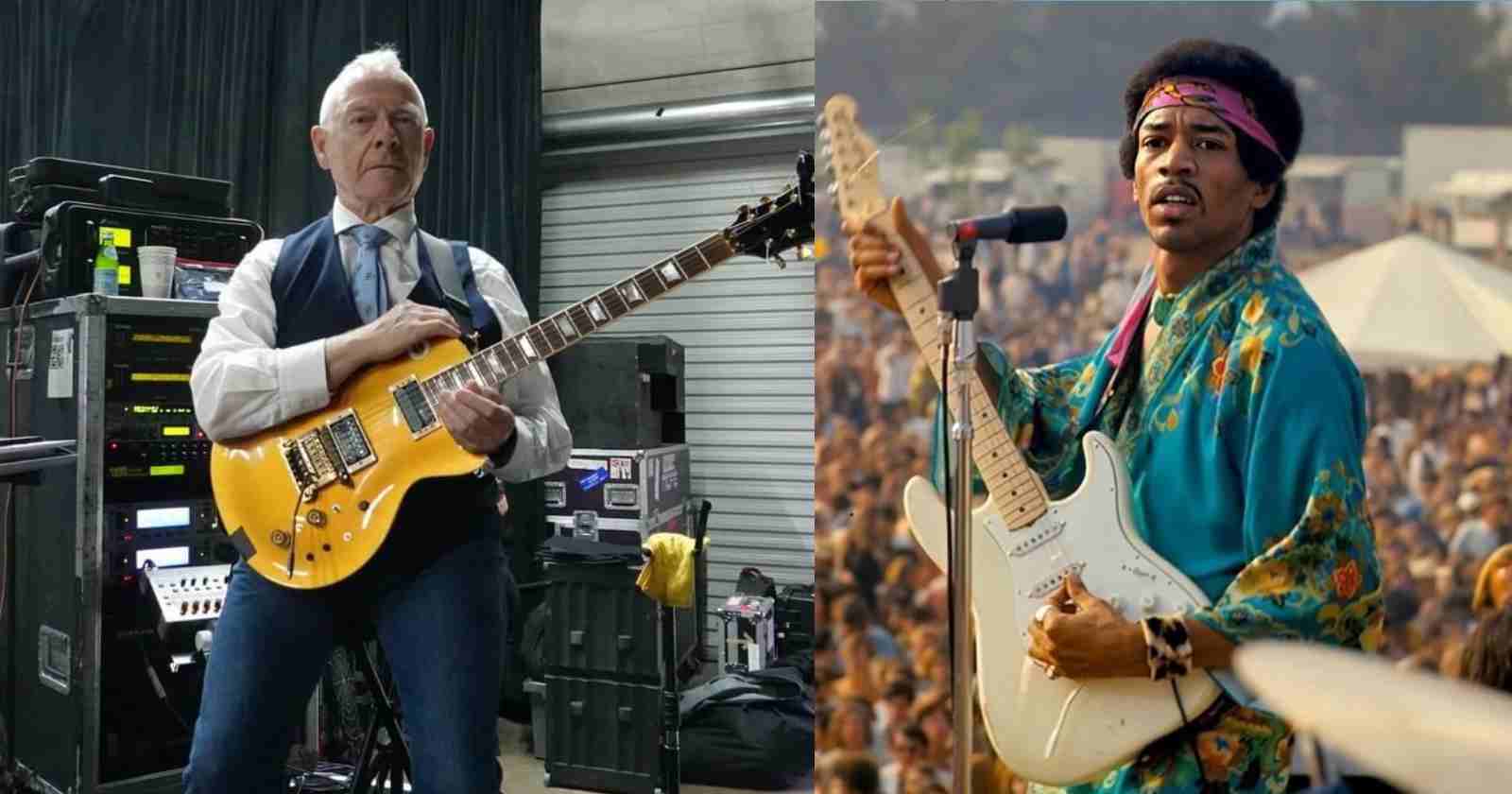 The King Crimson co-founder and guitarist Robert Fripp recalled in a trailer of his upcoming spoken word show “An Evening With That Awful Man and His Manager” (Transcribed by Killer Guitar Rigs), the story of when het met the late legendary guitarist Jimi Hendrix and what was the opinion of the musician on King Crimson.

Robert Fripp recalls what was Hendrix’s opinion on King Crimson:

“From time to time, whenever Hendrix’s anniversary is being celebrated, various guitar magazines or MTV ask me to comment on Hendrix. And the single time that I met Jimi Hendrix was at the Revolution club in Mayfair [in London] when Crimson were playing in 1969. It was the first time I sat down. I’ve always been a seated guitar player. And to work in a rock group, you couldn’t sit down! No one sits down to play guitar!”

“But I felt after… I think it was 12 performances by the ’69 Crimson. It was impossible for me to stand and play. So I said, ‘Look, I’ve got to sit down.’ And Greg Lake said ‘You can’t sit down. You look like a mushroom!’ My considered opinion was that the mushroom is a fertility symbol in many cultures. And even if I were sitting, at least I could, perhaps, wave the flag.”

“So the E.G. [Records] management bought a stool which was painted black. (It) was placed on stage at the Revolution club in Mayfair. Then, after the first set, backstage, a man came up to me in a white suit with his right arm in a white sling. One of the most luminous people I’ve ever met. He came up to me and said ‘Shake my left hand, man. It’s closer to my heart.'”

It was only in 1981, when he talked with the sister of the King Crimson drummer Michael Giles that she told him what was Hendrix’s opinion on the Progressive Rock band: “She said to me ‘Do you remember the time Hendrix came to see King Crimson?’ And I said ‘Of course I do, it’s my Hendrix story.’ And she said, ‘Do you know that I was sitting on the next table to Jimi Hendrix?’ I said ‘No.’ And she said he was jumping up and down, saying: ‘This is the best group in the world.'”

“In all due modesty, this is one of the best calling cards any working musician is likely to be able to present,” Robert Fripp said.

Jimi Hendrix died too soon at the age of 27 back in 1970, only one year after King Crimson released their first album.

King Crimson was formed back in 1968 in London and became one of the most influential Progressive Rock bands of all time. Their debut album “In The Court Of The Crimson King” (1969) is consider a masterpiece and has some of their most famous songs: “21st Century Schizoid Man” and “The Court of the Crimson King”.

Besides Fripp, the band also had musicians that formed or were part of other famous groups like Greg Lake, Ian McDonald, John Wetton and Bill Bruford.