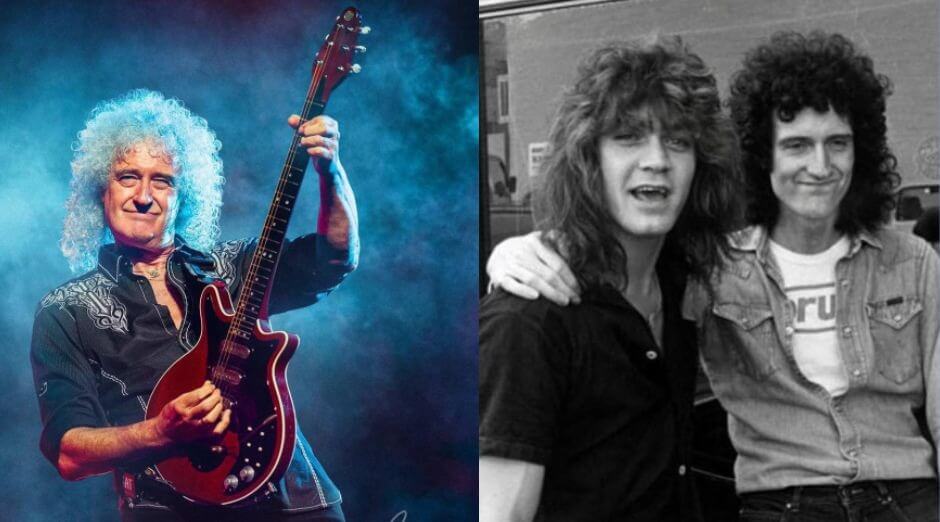 Queen‘s guitarist Brian May gave his opinion on Eddie Van Halen in an interview with Guitar World. He recalled when Eddie played with him on the Star Fleet Project in the 80’s and said his incomparable.

Queen’s Brian May gives his opinion on Eddie Van Halen:

“Eddie is incomparable. He stands there as one of the pillars of the development of the electric guitar technique. He’s a wonderful guy. And you know, it’s funny, during the lockdown, you start to look at your life again. One of my regrets is that certain people, I think, I’ve let slip away.”

“I haven’t talked to Eddie for a long time and I really regret that. I’d like to change that because he’s a fantastic guy, not just a great performer but an incredible spirit. The spirit, it’s blinding, and again, you could never get fed up of listening to that.”

“And Eddie can pick up any guitar – and I remember this from the Starfleet Project sessions – it doesn’t matter what guitar it is, he will make it sound like him! I watched him pick up a bass when we were doing a demo. He made that sound like Eddie Van Halen. It’s just astounding what he can do with those fingers.”

Listening to Starfleet Project, there’s a great synchronicity between Eddie’s playing and your own. You complement each other so well. Was that to do with the way you were playing – or was it to do with the tones you were driving for?

“Yeah, it was a great moment. It’s one of those moments which I will always fondly remember. We were all in a little bit of downtime in our own projects. Queen was in a bit of a hiatus, and I think Van Halen weren’t doing too much and my neighbor [drummer] Alan Gratzer from R.E.O. [Speedwagon] wasn’t doing much and we got together.

“It was one of those few occasions where I was the prime mover, I got up and made the phone calls and said, ‘Shall we do this?’ I think at that time it was new, for me. I was used to answering other people’s calls.

“So having the courage to do that and then actually acting it out and doing it in the studio live – and that was totally live; what you hear is absolutely what happened in those moments – it was thrilling beyond belief.

“The adrenaline flowing through our bodies was extraordinary. Yes, I think the thing that probably brought us together was the blues thing, you know, because both Edward and I had had that in our DNA, the blues stuff, and then we veered away into something very different.

“But when we started particularly the ‘Blues Breaker’ track, I think we kind of had Eric Clapton in our minds and the people that Clapton would revere like BB King, Muddy Waters; it was the power of the blues which made us gel. I remember Eddie saying, ‘You know, you got me to play today in a way that I haven’t played for years.’ Just simple and from the heart and with that kind of feeling. So yeah, it was a great time.”