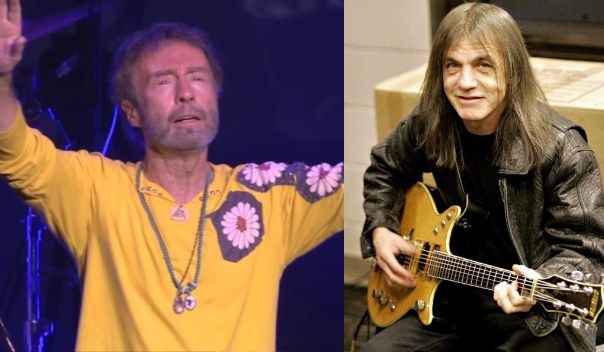 During a conversartion with Brian Johnson in his show “A Life on the Road” the Free and Bad Company frontman Paul Rodgers talked about his five year experience with Queen and the advice the late AC/DC guitarist Malcolm Young gave him before he joined the band.

Johnson: It takes a man with big cojones to turn to Queen and say, ‘Yeah, I’ll take it on, come on, bring it on.’ How did that feel? Was it tough or did you just have a ball and just say: ‘I’m not gonna do what Freddie [Mercury] did?’

Rodgers: “Well, it was all of the above, but we had a ball as well, you know. And going into it, I had read an interview that you had done, actually, when you had first joined AC/DC [in 1980]. … You said you were very nervous, the first show.”

“Malcolm [Young] had said to you, ‘Look, just go on there and be yourself.'”

“I read that and I thought, ‘That’s so wise. That’s the best advice anybody ever gave anybody.’ I took that to heart actually when I did the Queen thing because that’s the only thing I could do – was be myself. I wasn’t gonna try and be Freddie.”

“Well, it was a wild ride, I’ll tell you. And it came out of the blue. When Brian [May] asked me if I wanted to do a couple of shows just for fun in Europe, I was pretty taken aback.

“And I must say my first reaction was, ‘Well, I really don’t see that.’ But then I said to myself, ‘Well, it’s a challenge. Let me see if I can do it. Maybe I’m chickening out here.’ So I did it. And it turned into four years, actually.

“We toured all over the place. We toured the world twice, and we finished off with a studio album of all-original material [2008’s ‘The Cosmos Rocks’]. So it was a wild and crazy ride, as they say. And we are still friends, and I love the guys.”

“They wanted to play 50% of their music and 50% of mine. And I said to them, ‘People haven’t seen Queen live for a long time. We should make it Queen-heavy.’ So we did four or five of my songs… But it was great. It was good.”