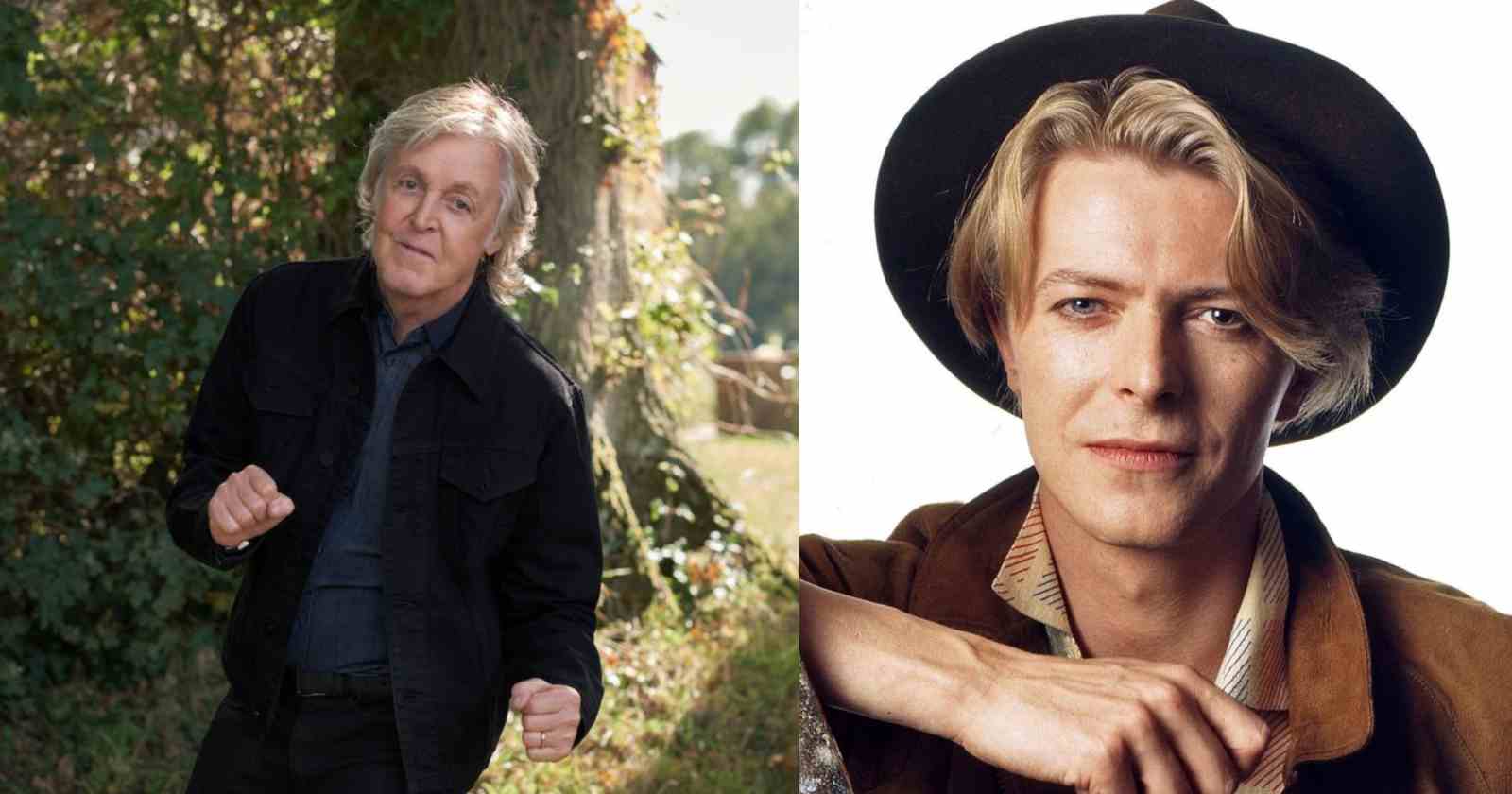 Images by @MaryMcCartney and David Bailey

David Robert Jones was born in London, England in 1947, he started his musical career in 1962 and in 1966 he changed his career name to David Bowie. He became one of the most influential artists of all time and was constantly changing his music, his look and his lyrics. He is also one of the best-selling musicians of all time with an estimated amount of 100 million records sold worldwide and was inducted into the Rock and Roll Hall Of Fame in 1996. Over the decades many of his peers gave their opinion on him and one of them is the legendary Beatles bassist and singer Paul McCartney.

What is Paul McCartney’s opinion on David Bowie

David Bowie had a closer friendship with John Lennon in the mid-70s when they even recorded together Bowie’s classic song “Fame”, that Lennon helped to write, made the backing vocals and played acoustic guitar. But, Bowie also had the chance to chat and play with Paul McCartney during his career. In 2016, when Bowie died at the age of 69, victim of cancer, the Beatle lamented his passing and praised the musician, saying:  “Very sad news to wake up to on this raining morning. David was a great star and I treasure the moments we had together.”

“His music played a very strong part in British musical history. I’m proud to think of the huge influence he has had on people all around the world. I send my deepest sympathies to his family and will always remember the great laughs we had through the years. His star will shine in the sky forever,” Paul McCartney said.

One of the special moments that McCartney had with Bowie was at the Live Aid in 1985, the classic charity event made by Bob Geldof (Boomtown Rats). The Beatle performed “Let It Be” with the help of Bowie, Pete Townshend, Alison Moyet, and Geldof in the front of 72.000 people at Wembley Stadium in London.

Curiously, the late musician almost formed a supergroup with John Lennon and Paul McCartney as he recalled in an interview with BBC Radio 6’s Marc Riley (Transcribed by Rock and Roll Garage) back in 2004. “It was New York, around 1974. I think that was around the first time that they’d gotten back together (Paul and John) again because I’ve got a knock on the door one night at the Pierre Hotel. I’d taken over a suite virtually for months and months. (So) I was kind of living there. I just gotten one of the new Sony reel-to-reel video tape things, black and white thing, you know.”

“I was doing like Cecil B. DeMille things, like, cutting out like figures and stage sets, that I could refilm things off the set and then have characters appear actually on my little set. I mean, I was incredibly involved. I was doing cocaine so I could stay up most of the night doing these things. About 3 in the morning there is a knock on the door. John was there and he had Paul with him. The two of them had been out on the town for the evening.”

“It was great, we spend the evening just like rapping and talking. There was kind of a strange thing between (the two). There was a little bit of distance every now and then. But that must have been the first time they’d been back together since the big burst. They actually asked me if would kind of join the two of them and become a trio with them. ‘David Bowie and The Beatles’, they liked the idea to of ‘DBB’, that’s what we wanted to call it. But the next morning just never came to anything,” David Bowie said.

As expected, everything that The Beatles members did after the band came to an end was always compared to what they have done together. Especially for Paul McCartney, that released two solo albums in 1970 and 1971, but decided not embark on a solo career at the time because he formed The Wings, meanwhile George, John and Ringo continued as solo acts.

Even though The Wings became a successful and praised group with an estimated sales of 22 million records worldwide, Paul McCartney was not completely happy with the work they were doing. During a conversation with Reverb in 2018, he revealed that it was one time hanging out with David Bowie that he begun to recognized how far the band went.

“The Beatles was the best band in the world. It’s difficult to follow that. It’s like following God. Very difficult, unless you’re Buddha. Anything Wings did had to be viewed in the light of The Beatles. And the comparisons were always very harsh. Denny Laine wasn’t John Lennon. Henry McCullough wasn’t George Harrison. That was inevitable.

“The interesting thing is that, looking back on some of the work, some of the stuff, it’s better than you think it was. But because it got such harsh criticism… from me. The critics gave us a hard run. But I was particularly hard on us. I remember looking at a book. There was an album we did. I think it was Back To The Egg, which didn’t do well. (So) I remember thinking, God, complete disaster.”

“Years later, I remember looking at it with Bowie in this old book. One of these who-did-what Hit Parade books, looking it up. It was like number eight in America. And I thought, most people would give their right bloody arms to be number eight. But eight, and I wasn’t satisfied. The Beatles had been number one. This is all right, keeps you going. But yes, a lot of the stuff is underrated, because of that,” Paul McCartney said.

Another interesting moment where Bowie and Paul shared the stage was back in back in 2000, when David Bowie was the one who presented the Vogue Fashion Awards to Paul McCartney’s daughter Stella McCartney, who won for ‘Designer of the Year’ and the Beatle appeared on stage to give her the prize.

She had no idea her father would appear to give her the prize. During her speech she thanked her late mother Linda McCartney, who had died two years earlier in 1998 at the age of 56 victim of cancer. “I would like to thank my mom, I would like to give this to my mom,” Stella McCartney said.