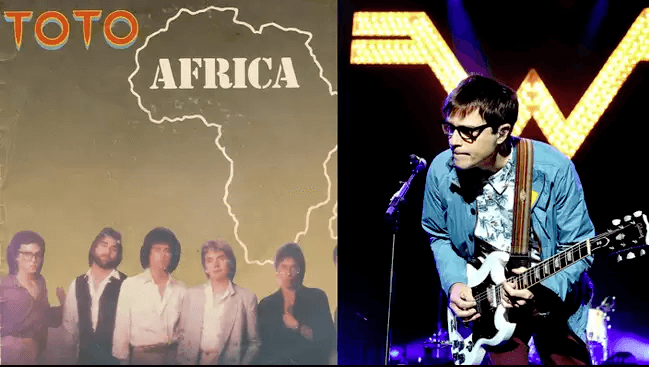 A few months ago, a Weezer fan made a rather bizarre request to the band to make a version of ‘Africa’, a hit by the Toto and one of the most iconic songs of the ’80s.

Weezer agreed to the request, and they should not have regretted it: their version of ‘Africa’ came to no. 89 of the North American sales charts, with the band not falling into the top 100 for nearly a decade.

Toto have now returned the favor. During a concert in Vancouver, Canada, the original authors of ‘Africa’ did a version of Hash Pipe, a 2001 hit by Weezer.

“Since we were smoking hashish before [Weezer] were even born, we thought we should do a version of it,” explained guitarist Steve Lukather, referring to Hash Pipe. “This is our tribute to the Weezers, may God bless them.”

This version will also, like ‘Africa’, give a single by Toto; will depart on August 10. Until then,

listen to it here:

The song appears in the 1982 album Toto IV and reached number one on the Billboard Hot 100 charts in February 1983, and number three on the UK Singles Chart of the same month. The song was written by keyboardist and vocalist David Paich and drummer Jeff Porcaro. On May 17, 2013, the song re-entered the New Zealand singles chart after an absence of 30 years, to reach a new peak of number 5, after he reached number 8 on November 14, 1982. A better success was achieved in the digital graphics of iTunes in New Zealand, where “Africa” ​​reached number 1.