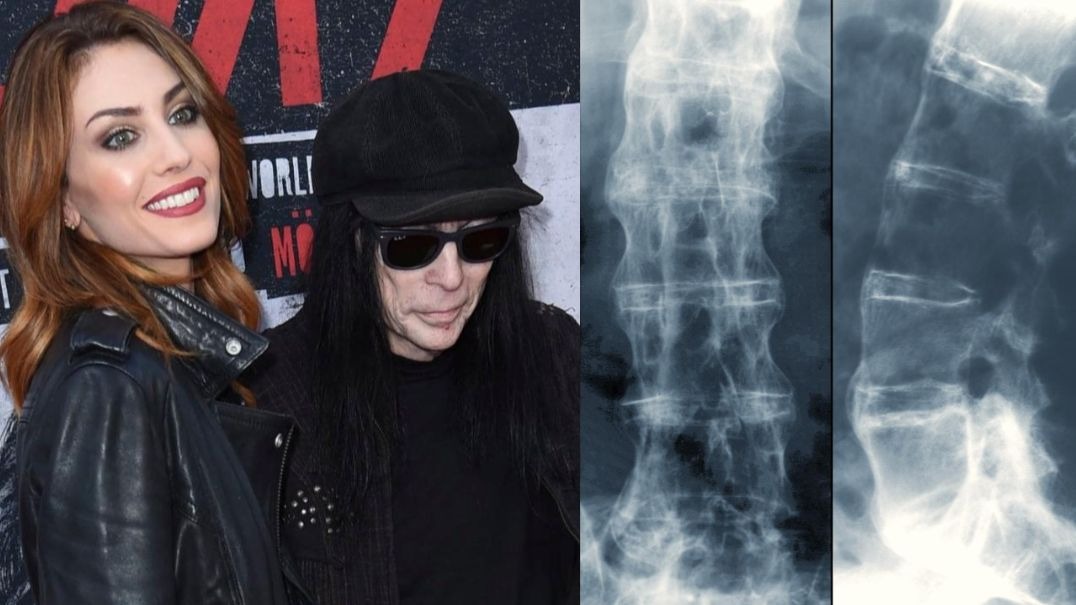 For most of his professional career, Mötley Crüe legendary guitarist Mick Mars has openly struggled with ankylosing spondylitis, a chronic, inflammatory form of arthritis that mainly affects the spine and pelvis. It was initially diagnosed when he was 17 years old and has increasingly impaired his movement that has caused him pain. This led to hip-replacement surgery at the end of 2004.

Over the years, the illness has caused his lower spine to seize up and freeze completely solid, “…causing scoliosis in [his] back and squashing [him] further down and forward until [he] was a full three inches (7.6 cm) shorter than [he] was in high school.”

“I ended up bent,” he told Goldmine. “I can always see my guitar.”

Mars wrote in the band’s 2001 bestselling memoir The Dirt that he started having problems when he was 19:

“My hips started hurting so bad every time I turned my body that it felt like someone was igniting fireworks in my bones. I didn’t have enough money to see a doctor, so I just kept hoping that I could do what I usually do: will it away, through the power of my mind. But it kept getting worse.”

“Then, one afternoon while doing my laundry. I started having trouble breathing. At first, it felt like someone had plunged a knife into my back. But as the weeks passed, the pain kept moving around my back. Next, my stomach started burning, and I worried that my whole body was about to fall apart. I thought that there was a hole in my stomach, and acids were leaking out and destroying my bones and organs. I’d grab hold of doorknobs, anchor my legs into the ground, and pull with my hands to stretch my back and ease the pressure out.”

Although AS has negatively impacted his health, it also allowed him to take on the role of the silent, mysterious member of the band who focuses on the music, something with which he’s quite comfortable, especially with the three larger-than-life personalities in Motley Crue.

“I don’t believe in my own hype,” he said to Goldmine. “I don’t need to have a tremendously huge ego and I don’t need to thumb my nose at people. That, to me, is total bullshit. I am a guy who loves to write and play music, and that is what I have been doing.”

About the 90s when Vince Neil left and many changes were made, he said:

“I was not only worried about writing music without a partner, but I had that gut-wrenching feeling that something was wrong,” Sixx wrote in This Is Gonna Hurt. “What I saw haunts me to this day. A frail man of 80, maybe 90 pounds, shaved head, gray skin, with a beard to his chest. He was dying, addicted to painkillers, brought on by a disease called ankylosing spondylitis.”

A successful hip replacement surgery was performed and the group got back together. But before Motley Crue could return to the road, Mars had to re-acquaint himself with his instrument.

“I kept getting worse and worse, and I just stopped playing guitar for almost two years,” he told Metal Sludge in 2008. “Nowadays, it’s not so bad, but back then when I was high on all that stuff and Motley were having a break, I knew if I didn’t stop I was gonna die. In the end, I had to go to a neuro-psychiatrist to straighten me up and he said to me, ‘Just hold the guitar for an hour a day – don’t play it, just hold it.’ It was pretty bizarre but I got through it, and in the end I think I’m actually a better player because of it.”