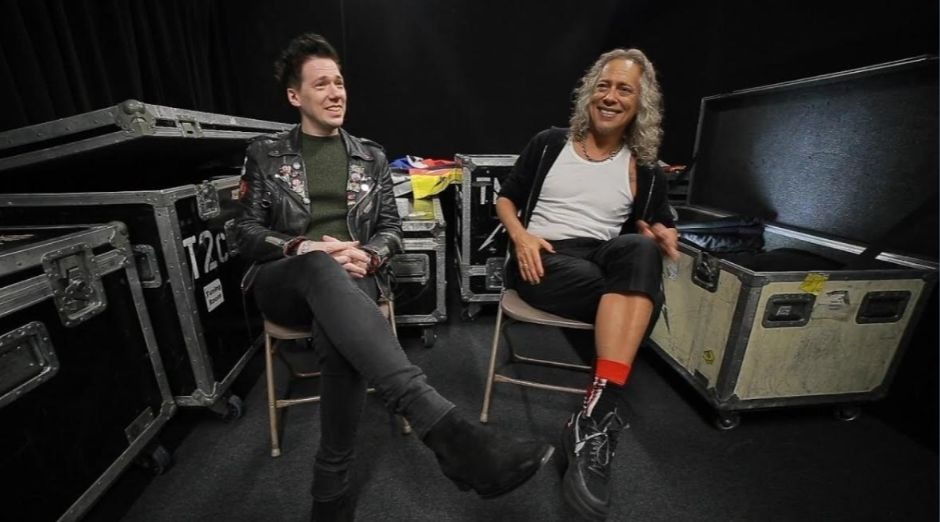 In an interview with Kirk Hammett and Ghost leader Tobias Forge, Metallica’s guitarist said that everyone in Metallica loves the swedish band.

“It’s our honor [to bring Ghost on tour with us], it really is. I mean, we are all big Ghost fans, and we want to put on the best possible show for our fans and it means bringing out the best possible bands we can to play with us.

“We feel it’s important to put out a very, like, well-rounded show that offers a lot of different stuff, and you guys [Ghost], your music and your show just offer so much of a different sort of thing that we do, that I think it works out really really well.”

“Thank you. I couldn’t really imagine anything more inspiring and I think the setup as well is really good for us.

“Because even though we have opened up for you guys before over the years, I think that even though I can’t really come up with, like, a terrible situation, it’s not seldom when you are a small band and you come in and you open up for a really big one, it can turn out to be a little daunting, especially if you are basically too new of a band.

“You are being thrown out sort of out of the nest, you can’t really sort of fly. If you lose 30-40 thousand people, that’s not cool. I definitely think that now coming in at this level for us, where we’ve done a few rounds, we already have a crowd, feels like there’s, like, enough people out there to sort of, like, ‘Yeah, I like what you did.’

“So you feel that towards the end of the show, it feels like we’ve gathered at least a majority of the crowd, which is a very good thing, and I think that definitely, you need to sort of come in at a certain level to be, I guess, welcomed by the crowd to do that. It’s them allowing you in a way to do entertain them.”

“For me, whenever we play, it’s a real event in my own head, and so whether it’s, like, a small theater, an arena, or a freaking stadium with 47,000 people, in my mind it’s all just the biggest event.

“At that point, it doesn’t matter what anyone else is thinking, whether they’re thinking, ‘It’s a festival, it’s a Metallica gig’ – it’s an event, it’s a fucking ground-breaking experience.

“To me, whenever they play, in my mind too, it’s like an event. It’s like going to see a freaking movie or a stage play. I don’t mean to answer for you, but that’s how I kind of see you guys.”

“For me, personally, I can’t speak for everyone, it’s like being here, doing this tour, opening up for you guys is basically two different things: it’s one – the amazingness of doing a big tour like this, being asked to do it, being able to do it, having the ability to actually put on a performance.

“And then as soon as like you’re geared up and on your way out to the stage, you can’t think about that anymore. You need to sort of, like, go out and entertain people.

“And, the one thing I’ve noticed, the bigger we get even on our own, there is some sort of breaking point when you’re playing clubs of a certain size and you’ve grown into bigger venues, eventually you end up, hopefully, in arenas.

“When you’re playing in front of a lot of people, even though it’s your draw, there’s gonna be a lot of people in the room that aren’t a hundred percent aware of everything that you do the same way that you would have if you just played in front of 300 most die-hard hardcore fans.

“Not saying that you don’t have to entertain those 300 people if you only have them in front of you, but when you have a thousand, two thousand or more, you need to make sure that everyone, even up there, you reach out to them.

“And even on a headline date, you can definitely have a bad day when you fail at grabbing everyone and entertaining them. That connection, because there’s always gonna be someone next to the fan who was like maybe heard a song on the radio, might like it okay, but is not a die-hard fan, and my job is to make everyone feel like they leave as a fan.

“Opening up for a bigger band where you have a lot of people coming in where there’s a lot of people who are not necessarily there for anything but the fact that it’s a big spectacle in town, I need to reach out to that person.”