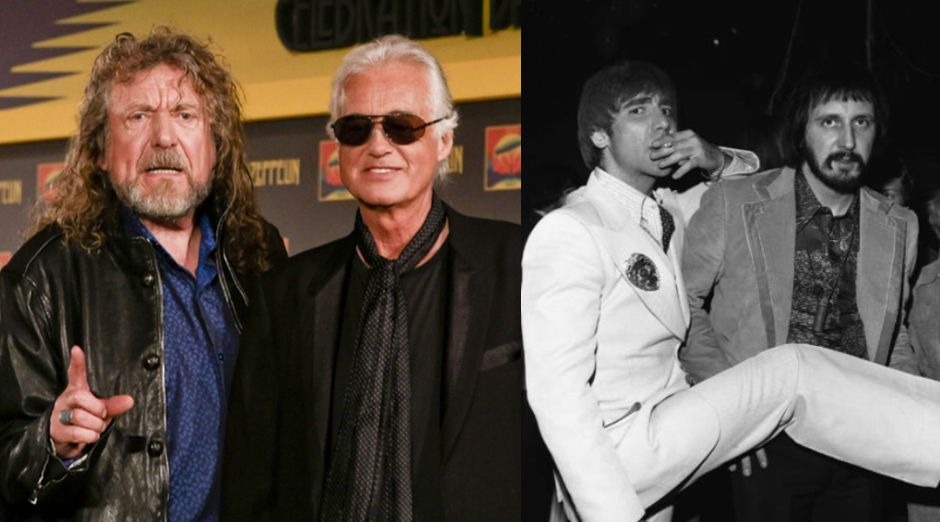 There are different versions for the origin of Led Zeppelin’s name. But the most famous include members of The Who. According to one of the versions, bassist John Entwistle was responsible for the idea for the name.

In the book Pretend You’re In A War, journalist Mark Blake addresses both versions. At first, the name came after a session in the studio of Jimmy Page and Jeff Beck, of the The Yardbirds, with Keith Moon, drummer of The Who. When he considered forming a group with the musicians.

The second version, also covered in the biography The Ox, about the bassist, credits Entwistle himself as responsible for the idea, in 1966. Richard Cole, the future responsible for managing Zeppelin’s tours. Entwistle mentioned the name casually, as a joke about the band “colliding like a lead zeppelin”. And Cole commented on the suggestion with Page.

The Led Zeppelin guitarist, however, credits Moon with the name. In 1977, during an interview with Trouser Press, Page explained. “It was Moon, I’m sure, despite whatever Entwistle said. I’m sure Richard Cole asked Moon for permission when we decided to use the name,” he recalled.

“It was a name that Keith Moon had mentioned back then. He was talking, ‘Wouldn’t it be fun to have a band called Led Zeppelin?’ And I asked him if we could use the name, because I was gonna be in this band Led Zeppelin with Keith Moon, so was Jeff Beck.

“So when we were playing in Scandinavia we were out there as New Yardbirds. It was a cloak of invisibility really. And even on the first recordings it said ‘New Yardbirds’ on the box because I didn’t want anybody to know what the name of the band was until we really officially unveiled it. And [the first album] was it.

“We came over to United States right on Christmans in 1968 and then we played some concerts. Then we came to the west coast and played Los Angeles and and The Fillmore. And what happened at The Fillmore was that we had an extra night put in, and we just tore it up.

“The band that was supposed to be playing there didn’t come. And of course, we had this really hard set. And the whole of the United States got to hear about this group that now had the record out in the early part of January.

“The record was being played all over the United States. It was via radio because there weren’t cell phones, there was no internet. It was a word by radio that this band was just incredible.

“And as we moved across the United States by, say, March – we were on the East Coast from the West Coast – the people were just coming to see us. It was incredible, because the reception was amazing.

“But here comes the interesting thing – from that point onwards we were never able to satisfy the demand of people that came to see us. And we were doing multiple date shows in cities and we would still just sell out over all the years that we played. So that’s really good cort of CV, really. [Laughs]”