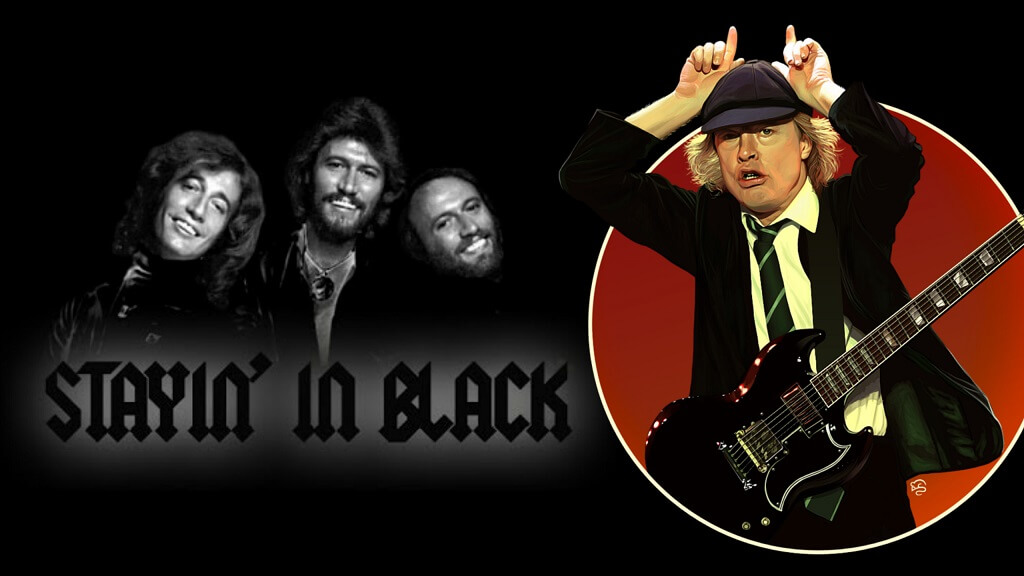 Bee Gees and AC/DC singing together? Well, that’s the ideia in the mashup below “Stayin In Black” that mishes Bee Gees’ “Stayin Alive” and AC/DC’s “Back In Black”.

The band co-produced the song with Albhy Galuten and Karl Richardson. It is one of the Bee Gees’ signature songs. In 2004, “Stayin’ Alive” was placed at number 189 on the list of Rolling Stone’s 500 Greatest Songs of All Time.[3] In 2004, it ranked No. 9 on AFI’s 100 Years…100 Songs survey of top tunes in American cinema. In a UK television poll on ITV in December 2011 it was voted fifth in “The Nation’s Favourite Bee Gees Song”.

Back in Black is the seventh studio album by Australian rock band AC/DC. Produced by Robert John “Mutt” Lange, the album was released on 25 July 1980 via Albert Productions and Atlantic Records.

By the late 1970s, AC/DC began achieving significant popularity outside their native Australia, with high-energy live performances and a series of successful albums. They had previously paired with producer Lange in 1978, recording their international breakthrough hit album Highway to Hell.

Back in Black was the band’s first album featuring vocalist Brian Johnson, who replaced Bon Scott after the latter had died back in February of that same year, shortly before the band actually started recording the album. Instead of disbanding, the group decided to continue on with Johnson.

Ian Hill reveals why K.K Downing was not invited back to Judas Priest
Watch Coke’s World Cup commercial with AC/DC song
To Top