Deep Purple’s “Smoke On The Water” is probably one of the most famous and simple riffs in rock and roll history. And now you’ve got the chance to hear the amazing Ritchie Blackmore guitar isolated on this song.

“Smoke on the Water” was first released on their 1972 album Machine Head. In 2004, the song was ranked number 434 on Rolling Stone magazine’s list of the 500 greatest songs of all time, ranked number 4 in Total Guitar magazine’s Greatest Guitar Riffs Ever, and in March 2005, Q magazine placed “Smoke on the Water” at number 12 in its list of the 100 greatest guitar tracks. 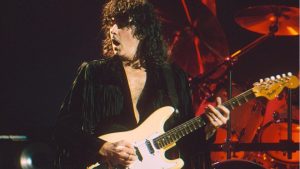 The track is known for and recognizable by its central theme, developed by guitarist Ritchie Blackmore. It is a four-note blues scale melody in G minor, harmonized in parallel fourths. The riff, played on a Fender Stratocaster electric guitar by Blackmore, is later joined by hi-hat and distorted organ, then the rest of the drums, then electric bass parts before the start of Ian Gillan’s vocal.

Jon Lord doubles the guitar part on a Hammond C3 organ played through a distorted Marshall amp, creating a tone very similar to that of the guitar. Blackmore usually plays the main riff using a finger pluck or occasionally a plectrum upstroke (to accentuate the tonic).

According to his wife, Kerry King will stay in music after the end of Slayer
Watch Rolling Stones concert at Knebworth in 1976
To Top