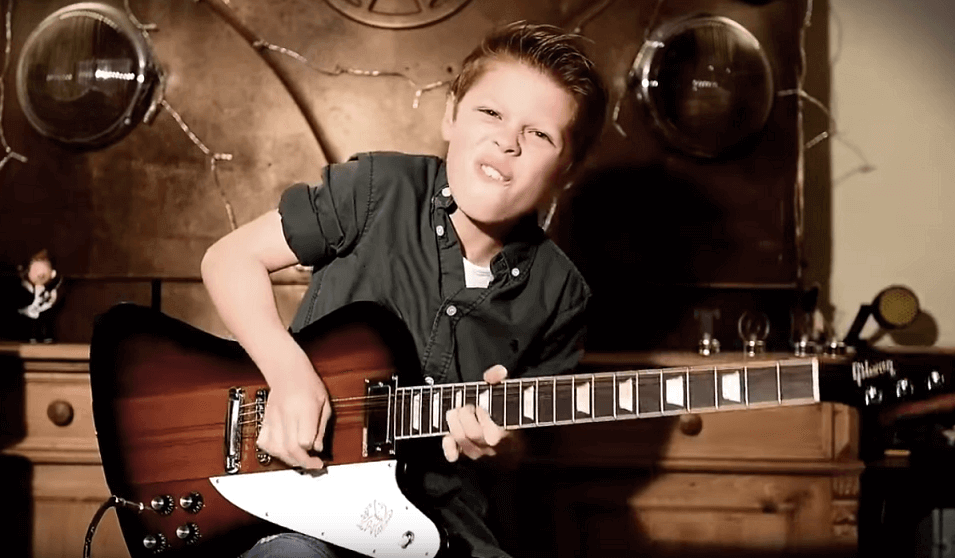 Toby Lee is still very young but is already an awesome guitarist and he paid tribute to the late Malcolm Young performing AC/DC’s classic song “Thunderstruck” from the album “Razors Edge”(1990).

The song was released as a single in Germany, Australia, and Japan, and peaked at No. 5 on the U.S. Billboard Hot Mainstream Rock Tracks. In 2010, “Thunderstruck” topped Triple M’s Ultimate 500 Rock Countdown in Melbourne, Australia. The top five were all AC/DC songs.

With the exception of new material from an album they are touring behind, this is one of the only two songs released after For Those About to Rock We Salute You that the band still performs live in concert, the other being “Rock ‘N’ Roll Train”.

Angus Young stated in the liner notes of the 2003 re-release of The Razors Edge:

“It started off from a little trick I had on guitar. I played it to Mal and he said ‘Oh, I’ve got a good rhythm idea that will sit well in the back.’ We built the song up from that. We fiddled about with it for a few months before everything fell into place.”

“Lyrically, it was really just a case of finding a good title … We came up with this thunder thing and it seemed to have a good ring to it. AC/DC = Power. That’s the basic idea.”