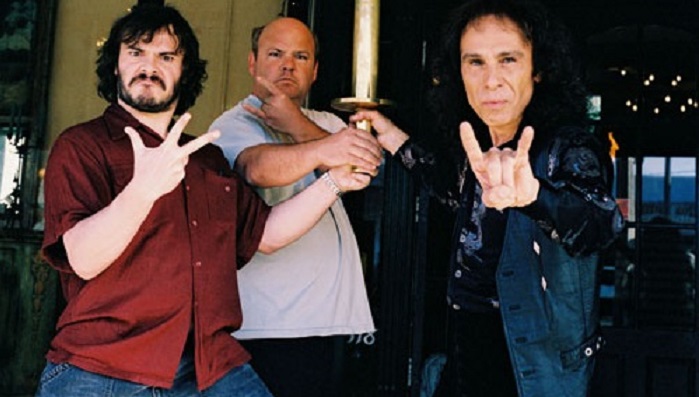 The song “Push” is from Dio’s “Killing the Dragon”, the ninth studio album by the band. It was released May 21, 2002 through Spitfire Records and was produced by frontman Ronnie James Dio. The album was reissued in 2007 in a 2-CD package with Magica.

In an interview on the TV show Uranium, Dio stated that the “dragon” of the album title refers to technology. He expressed concern with it threatening society in the future. Dio elaborated that the title track refers to “those who perpetrate injustices and what the world is doing to stop them. In fantasy tales, dragons were notorious for stealing children and feeding them to their babies.

The song “Push” was a hit and had a music video that featured Tenacious D performing a humorous cover of Ronnie James Dio’s biggest song from his time with Black Sabbath, “Heaven and Hell”. Dio approaches them to tell them that he will pay them to play Tenacious D music.

Apparently, according to an interview with Dio in 2005, during filming of this music video, Ronnie James Dio became friends with Tenacious D frontman Jack Black, who told Dio about his plans to make a Tenacious D film and asked him to perform in the film if anything became of it. In 2005, Dio received a letter from Black informing him that production of the film was starting and requested that he play himself.

This film is Tenacious D in The Pick of Destiny. The video was directed by Bill Schacht (who has directed other videos for Alice Cooper, Amon Amarth, Sister Sin, Yngwie Malmsteen, Saxon, etc.) for Aestheticom. The video was listed as No. 54 most metal moment of all time on a VH1 100 Most Metal Moments show, hosted by Eddie Trunk.