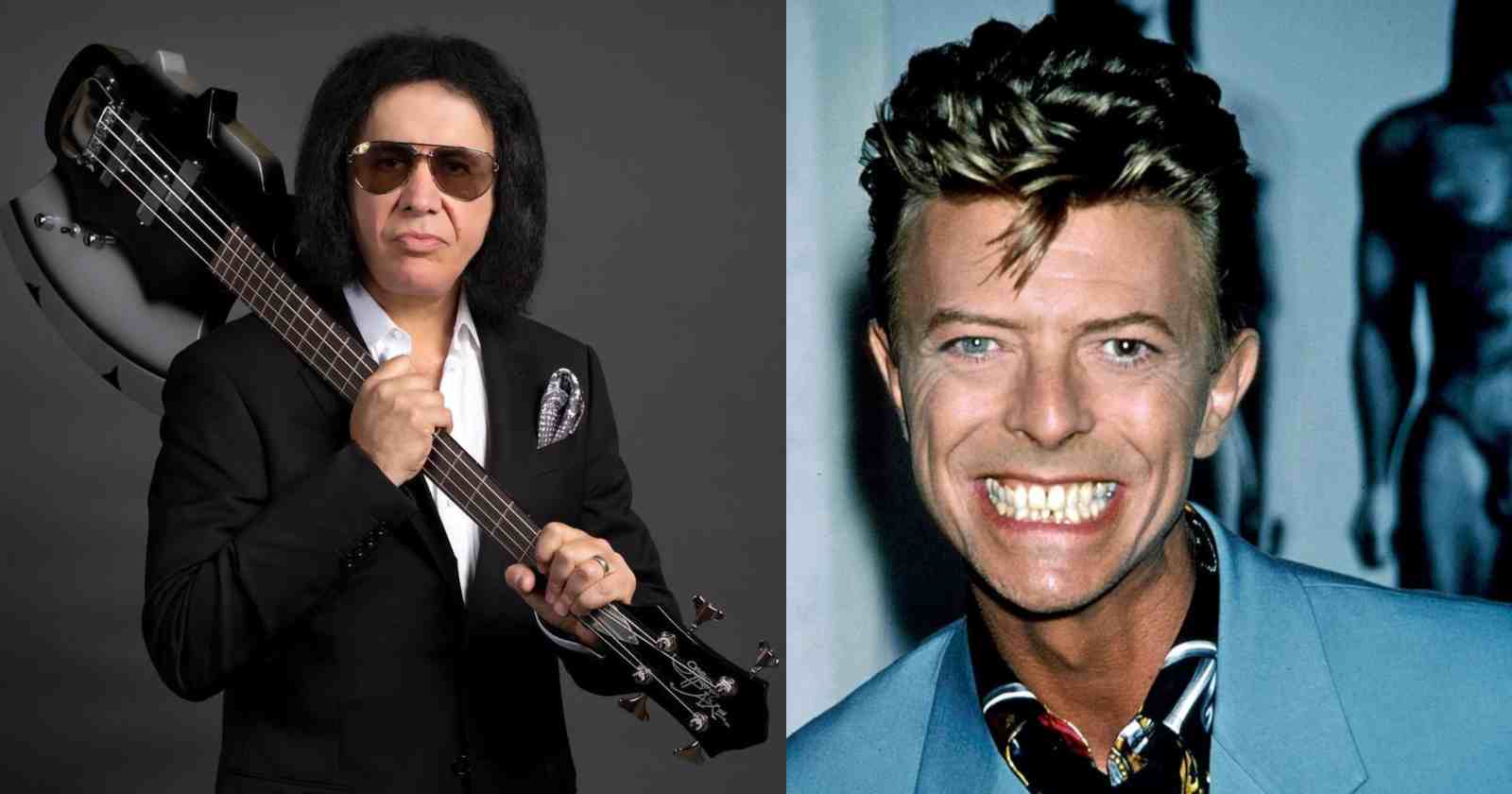 David Robert Jones was born in 1947 in London, England and changed his name to David Bowie after he started his career in the early 60s. From his debut album in 1967 until his last record in 2016, the musician released 26 studio albums that showed how versatile he could be, changing his look and his sound from one album to the next one.

Over the decades many famous musicians talked about the late artist and one of them was the Kiss bassist and singer Gene Simmons.

What is Gene Simmons’ opinion on David Bowie

The Kiss co-founder Gene Simmons was heavily influenced by David Bowie and in a conversation with Planet Rock (Transcribed by Rock and Roll Garage) in 2022, he revealed some of his favorite songs of all time and explained why the tracks were so important to him. One of them was Mott The Hoople’s “All The Young Dudes”, written by Bowie.

“Bowie’s best song in my estimation it has always been ‘All The Young Dudes’ that he wrote and got Mott The Hoople to do. I have the original Bowie demo of him singing. Against that original track is you know, goosebumps. I didn’t even quite know what all of the words meant. But I didn’t care. Look, America gave the world Jazz, Blues, Hip-Hop, Rock, Country, Rockabilly. But it’s the English, the Irish, the Welsh and all the (United Kingdom countries) that made it glamourous. (Adding style to it),” Gene Simmons said.

As pointed by Simmons, “All The Young Dudes” was written by David Bowie and given by him to Mott The Hoople to record. The song became the group’s signature track being released in 1972. Bowie had recorded the original version in that same year.

Right after David Bowie’s unexpected death in the beginning of 2016, just a few days after he released his final album “Blackstar”, Gene Simmons was invited by CNN to talk about the legacy of the artist. He recalled that the first time he met Bowie was in 1975 and he never forgot how polite he was. (Transcribed by Rock and Roll Garage) “In 1975 in New York City both David and Kiss were in the same recording studio. We had yet to sort of ascend and play stadiums and all that. We were still a new band. some people knew about us and some not.”

“David Bowie, I don’t know why, made it a point of inviting us into his recording session. We were all nervous and stuff. I remember walking in. Even though we didn’t know each other, he smiled and looked me right in the eye and stuck his hand out and said: ‘Hello, wonderful to meet you’. I was taken aback, I was awestruck by what a giant, this guy who changed the face of music refuse to stand still and look over his shoulder while he was running his own race. He just continued to move as fast as he could foward, marching to the beat of his own drums.”

“Ziggy, especially, the ‘Rise and Fall Of Ziggy Stardust’, especially that record is deeply engrained in my DNA. He passed three days after his birthday at 69, he just released a brand new record called ‘Blackstar’. I think it’s worth noting that the first lyric in the first song says ‘Look up here, I’m in Heaven’. I mean, what a giant. Bowie always understood that when people go to concerts they’re not just listening to music. They are listening with their eyes and you’ve got to give more. Heaven knows, Bowie gave everybody and his fans much more. I think it’s worth noting that unlinke us and unlinke all the rest of the famous people out there, he refused to stand still, which why it’s astonishing.”

“When you look through the decades and you look through years you can’t never pin point who David Bowie was because he was so many things. His musical homage, even in a line like “Ohhh, wham bam thank you ma’am’ in a song called ‘Suffragette City’. It’s an ode to Charles Mingus, the great Jazz artist and his drummer Max Roach, used to say ‘wham bam thank you ma’am’.”

“I mean, you just can’t definy exactly what he was. He was unique. It’s worth noting that there are a lot of famous Rap stars, Pop stars and all that stuff. So it ain’t the same thing. The word ‘Icon’ is reserved. The air up there is thin. There are very few up there that deserve to be up there and clearly David Bowie is,” Gene Simmons said.

His reaction when he first heard that David Bowie had died

During the same interview, the Kiss member was asked about his reaction when he first heard that David Bowie had died. Simmons said that Bowie was a giant because he never used his private life to be in the headlines.

“Very, very sad day. But like Bowie always has been throughout his life, he just didn’t used his private life as another headline for CNN or anybody else. “I’m assuming he understood that he wasn’t well and decided not to drag the media to it. Quietly and humbly, went his own way. He was a giant.”

Simmons also was asked to tell young people who were watching how big David Bowie’s legacy was, he said that the best thing he could say in that moment was to people go listen to Mott The Hoople’s ‘All The Young Dudes’. “Bowie wrote it, gave them almost all the instruments, produced it. (He) really made Mott The Hoople into a big band because he cared about them. This was the kindness that he showed to new bands and other people. Even a knucklehead like me, who walked in, who was nobody. (He) put his hand out and said ‘Hello, wonderful to meet you’,” Gene Simmons said.