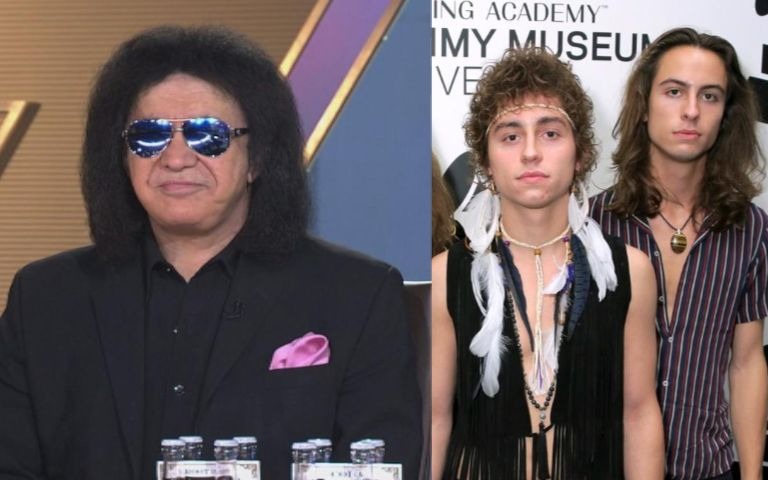 Gene Simmons said that “new blood” is inspiring him and Paul Stanley to continue to play, like they did in the 80s and 90s.

“It’s no different than a soccer team or a football team,” he said during an appearance on this week’s edition of “Three Sides Of The Coin”. When you have the same members and a few of the members drink too much or do something and you pass the ball and that idiot doesn’t get the goal because he stayed up last night and drank too much, you wanna get rid of that guy; he’s a loser.”

“But he’s got a right to say, ‘It’s my life. Don’t tell me what to do.’ Fair enough. But the problem is, when you’re on the soccer field or a football field, when he misses the goal, the whole team loses. You’ve gotta change a flat tire. It affects the whole car and everybody that’s in it. So you have to get rid of these people.”

“We love [original KISS members] Ace [Frehley, guitar] and Peter [Criss, drums] to this day — they were equally as important in the beginning of the band — but they’ve been in and out of the band three different times,” he continued. “Mother Nature will burn you on the very first time you stick your hand in fire. I mean, how many chances do people want?”

“The thing that infused us with more energy and the kind of a, ‘Wake up. You’re the most blessed person on the planet,’ is Tommy [Thayer, guitar] and Eric [Singer, drums]. When they joined us — equally as talented, professional, show up on time. There’s no dark cloud. There’s no drugs.”

“I don’t even say this for effect. Literally nobody in the band even smokes cigarettes,” Gene added. “Nobody drinks. Not because there’s some kind of rule. If you wanna drink off to the side, sure, help yourself — as long as you’re professional on stage.”

“But nobody goes to the bars — there’s no pub stuff. It’s not part of the culture. And literally nobody in the band uses drugs. And maybe that has a lot to do with showing up on time and getting up on that stage and making the words true.”

“‘You wanted the best’ — not the second best or kind of good — ‘you wanted the best. You’ve got the best. The hottest motherfucking band on the planet.’ And the words have to mean that, or get off the stage and give — I don’t know — Greta Van Fleet a chance.”