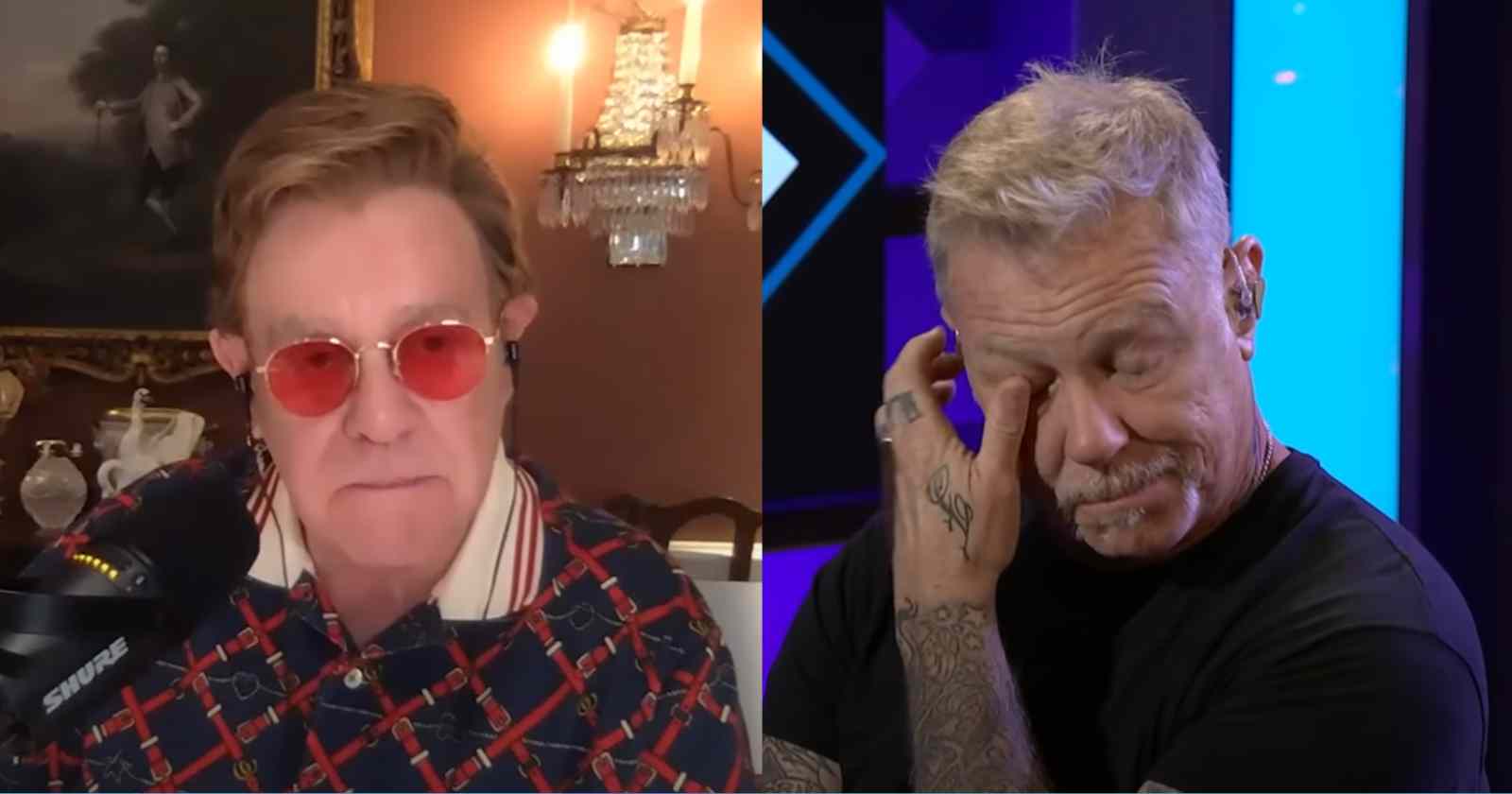 To celebrate the 30 years of the Black Album Metallica prepared “Metallica’s Blacklist” a tribute album compilation with 53 different bands covering the tracks of their classic record.

Among them are Elton John and Miley Cyrus that made a version for “Nothing Else Matters”. She performed with Metallica on The Howard Stern Show and their were surprised that Elton John that appeared and praised the band saying that the song is one of the greatest of all time, what moved guitarist and singer James Hetfield to tears.

Elton John gave his opinion on “Nothing Else Matters” and Metallica, saying:

“This is one of the best songs ever written to me. I mean, it’s a song that never gets old. I’m playing on this track, I just couldn’t wait, because the chord structure, the melodies, the time changes. It’s got drama written all over it and I just thought it was a great idea to start with piano.”

“I have to say, it was no-brainer playing on this song. Metallica are probably the creme-de-la-creme of those kind of bands, you can’t really define them, not a Heavy Metal band, they are a musical band. Their songs are not just Heavy Metal, they are beautiful songs and this is such a melodic song, it’s f*cking great, actually.”

When asked if it was a difficult thing to add the piano to the song, he said:

“I think because the song is so melodic, you know, it’s a very beautiful song. If you just take all the guitars and just sing the song acapella, it’s a bit like “Green Sleeves”. It’s a beautiful melody. When you got a beautiful melody to play to with all the rest going on it’s a juxtaposition of musicial instruments. So I found it really easy. I mean, it’s a kind of classical song. It’s like a classical piece of music.

Howard Stern went on and asked Metallica how they felt to hear Elton John saying that about them:

Drummer Lars Ulrich said: If you said that (That Elton John was playing one of their songs) 40 years ago when James and I started down to 605 in Norwalk in a garage down there with our pots pissing if you could say 40 years later that we would still be functioning that we would still be sitting here with one of the greatest stars in the world next to us, with Elton on a zoom and doing your radio show talking about the accomplishments and what this record means to so many people that would be the mindf*ck of all the mindf*cks.”

“So it’s just crazy cool and to sit here and be able hear what you said, Elton, sitting next to James, we’ve been doing this for 40 years together, the reaction that I could feel in his body language when you said it was one of the greatest songs ever written and I know how much that means to you (referring to James). So, this is just incredible to hear, so thank you.

“This is one of the greatest bands of all time. It’s their 40th anniversary, this is the classic album. It’s a no-brainer to come on and pay tribute to people like that. The nicest thing about it is after all this time is hard to be in a band, you know. The different personalities, these guys are still together, I admire that. Because it’s the hardest thing in the world, so kudos to Metallica, they are one of the greatest bands of all time.