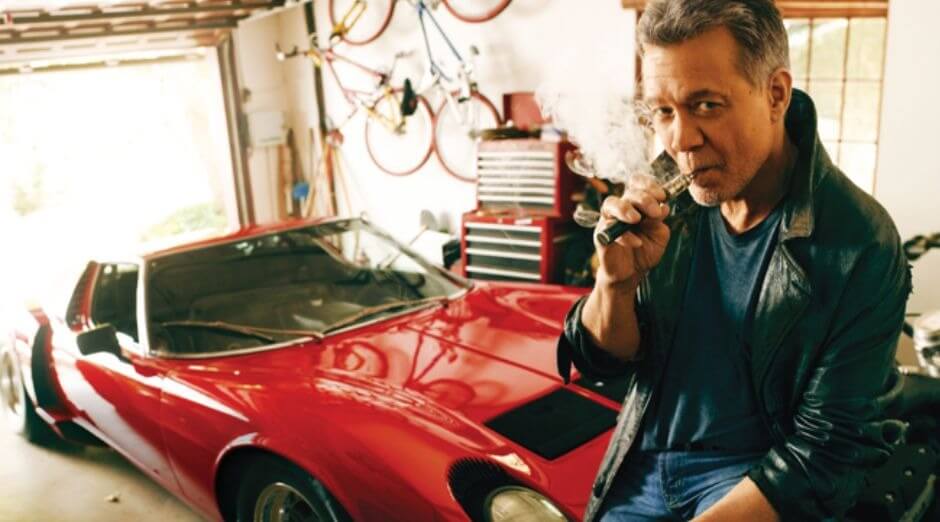 They are all being sold by Stephen Becker Automotive Group that talked with Eddie about the cars. He revealed some details of each one of them.

Talking about the 1970’s Chevrolet Nova they said: 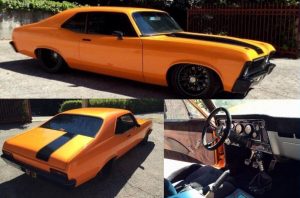 “This is an extremely rare and unique opportunity to purchase a vehicle currently owned by the greatest guitar player in the World, Eddie Van Halen. This vehicle will be accompanied by a certificate of authenticity (COA) personally signed by Eddie Van Halen.”

“Eddie’s Nova was customized by well-known automotive customizer Bones Fab in California. With Eddie’s direction, it started out with an engine swap, then morphed into suspension upgrades, larger tires and a new paint job. The engine is a 650HP LSX 454 crate engine topped with a F.A.S.T intake,102mm throttle body and Holley Dominator EFI computer drives the EFI.”

“A Tremec Magnum T-56 six speed transmission transfers power to a Currie 9″ Ford rear end with 4.10 gears. Also the suspension is all Ridetech. Custom KWC wheels 18×7 fronts and 18×12 rears give this care a great stance and performance.”

“The front end consists of tubular A-arms, Shockwaves and a Tru-Turn kit. The rear is a custom triangulated 4-link, shock waves and custom sway bar. Also a Vintage Air package was added, along with a Front Runner kit and gen II heat and A/C. Autometer gauges in a Covan insert finish off the dash for a great look.”

“The car has a full roll cage, custom door handles, carbon fiber hood and trunk lid. In addition, the car is finished with a custom paint job in PPG’s Custom House of Colors tang yellow orange. Eddie loves driving the car on the California freeways. It is all dialed-in and brutally fast!”

Talking about the Porsche 911 GT3 RS the company and Eddie Van Halen said: 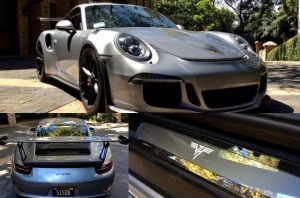 When Car and Driver writer David Curcurito asked Eddie what he loves about the car, Eddie responded, “For one, it’s just so light. But really, it’s the handling. I don’t know how Porsche did it. We raced in the rain at Buttonwillow, which is my favorite track. We raced in the fucking rain and we never lost it, never spun out. BBI [Autosport] did my suspension. I set it up so you can feel it go and you can actually slide the damn car. So it’s the first time ever I’ve been able to four-wheel-drift a Porsche. Every other Porsche I’ve ever had, I’ve spun them all. Well, every 911, anyway.”

About the 1947 Dodge COE “Stake-Bed” the company said: 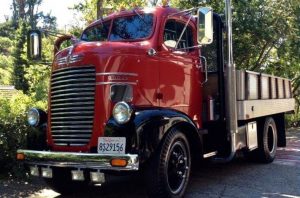 “This is an extremely rare and unique opportunity to purchase a vehicle currently owned by the greatest guitar player in the World, Eddie Van Halen. In addition, this vehicle will be accompanied by a certificate of authenticity (COA) personally signed by Eddie Van Halen.”

“Eddie’s 1947 Dodge COE “Stake-Bed” truck was customized by well-known automotive customizer and project finisher Bones Fab in California. The truck was (originally) outfitted with a Ford 6.9 liter diesel and 4-speed manual transmission. Bones re-wired the whole truck with a Painless wiring harness. Also the drivetrain was updated with a newer Ford 7.3 liter diesel with a custom turbo setup on it.”

“The radiator was upgraded with a Fluidyne aluminum radiator with twin Spal fans. Also upgraded was the transmission to a ZF 5-speed outfitted with a Gear-Vendor for good highway cruise-ability. The steering was upgraded with a Lee Manufacturing steering box and ram assist unit. These upgrades make the truck significantly more enjoyable to drive. In fact, the truck was improved from downright scary to drive to very enjoyable. Besides, Eddie used this truck as his Saturday driver to Lowes and Home Depot.”