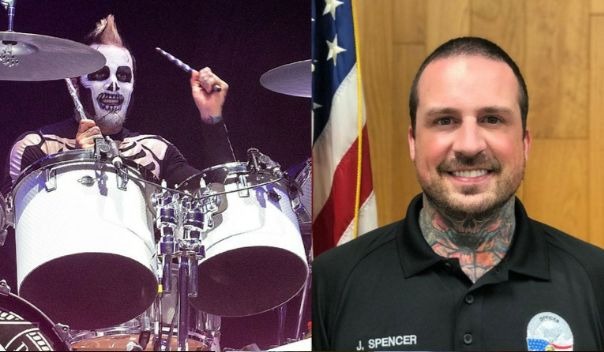 Jeremy Spencer, a former Five Finger Death Punch drummer, left the band in December 2018 to become a police officer in Indiana, United States, as he told in post on his Instagram last Monday, 10th.

Although he lives in Las Vegas, Nevada, Spencer chose to serve as a reserve officer in another state because he grew up in a nearby location, and sees the return as nostalgia. “It is an honor to be able to return to this area where I can serve the community as a reserve police officer and help my brothers,” he wrote.

When he left the Five Finger Death Punch, the drummer stated that his body could not fulfill all the physical demands that the work demands, since he has problems in the spine. To serve as a police officer, he will undergo surgery to replace damaged discs of the lumbar spine, as he explained to fans in the photo comments. “When I heal, I begin to serve. As a reserve officer, I will do this only once in a while. ”

Spencer spoke with WFIE about his new job. “You see the impact it has on everyone’s life. It’s very important.” On leaving the musical world, he said that “life is about having new experiences, so for me it was great, and I think it’s going to be great what I do now. ”

The musician, however, did not rule out the possibility of playing the drums again one day. “I’m busy now, working on other projects. But the fact that I’m no longer in a band doesn’t mean I’ve retired. ”

The new drummer of the Five Finger Death Punch is Charlie Engen. The band found him on Instagram when they saw him play in several videos.