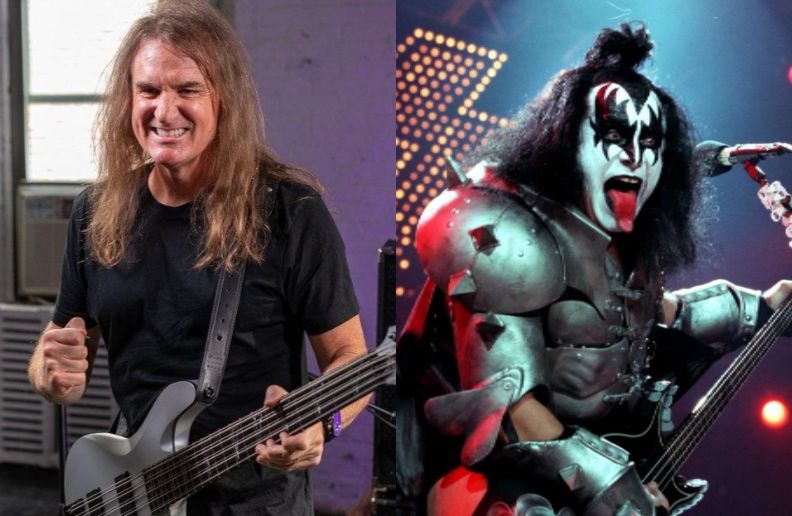 In an interview with Rock Sverige Megadeth bassist David Ellefson praised KISS bass player Gene Simmons, saying he is one of the best bassists ever.

“Gene’s one of my favorite bass players. I defend Gene to the grave. Absolutely one of the greatest rock players ever.

“I missed The Beatles. I was born in ’64 the year they came out and they were broken up by ’71 and I started to listen to music about ’74, so I just missed them completely.

“Gene and Paul [Stanley] very much credit The Beatles for the whole concept of KISS. KISS were my Beatles and it’s funny, as big of a KISS fan as I was and I was the biggest, as we all claim to be, funny thing is that in my bands growing up, we never played any KISS songs because they were hard to play.

“Paul’s guitar, his voicing and chord choices were so avant-garde and just really out of character and that’s what made them so cool. They were riffs, but there were these chords… whereas you listen to this kind of 12-bar blues kind of stuff that was going around at that same time… the KISS stuff was very challenging and they tuned down a half step.

“I remember when I bought the KISS ‘Destroyer’ [1976] piano, vocal, acoustic guitar songbook and everything was in E-flat and I knew how to read music and I went, ‘But my bass only goes to E? How do you play this?’.

“I got very frustrated and I didn’t realize they tuned down and of course in a piano book, everything’s very little. You can’t drop tune a piano and drop tuning wasn’t even in vogue. Gene’s bass playing was just incredible.

“I’ve emulated some of it, him and some early Geezer [Butler], but certainly Gene, like, [1974’s] ‘Firehouse.’ I remember when Dave [Mustaine] and I first met and we were putting together the very earliest Megadeth stuff, I would emulate this kind of Gene fashion of his bass lines that I really, really liked.

“I just saw KISS a couple of weeks ago when the came through town and Gene was playing the best I’ve ever heard him play. He’s ad-libbing and riffing out and his tone’s great and here he is, he’s an older guy playing fucking better than he’s ever played and just going for it!

“Just riffing like how Jack Bruce or John Entwistle would be riffing in between parts of songs and it was, like, ‘Fuck, check him out, man!’

“I totally defend Gene and I think he’s an incredible bass player and the fact that he pits blood and breathes fire with fucking bat wings and those killer boots just makes him the best. [Laughs]”.