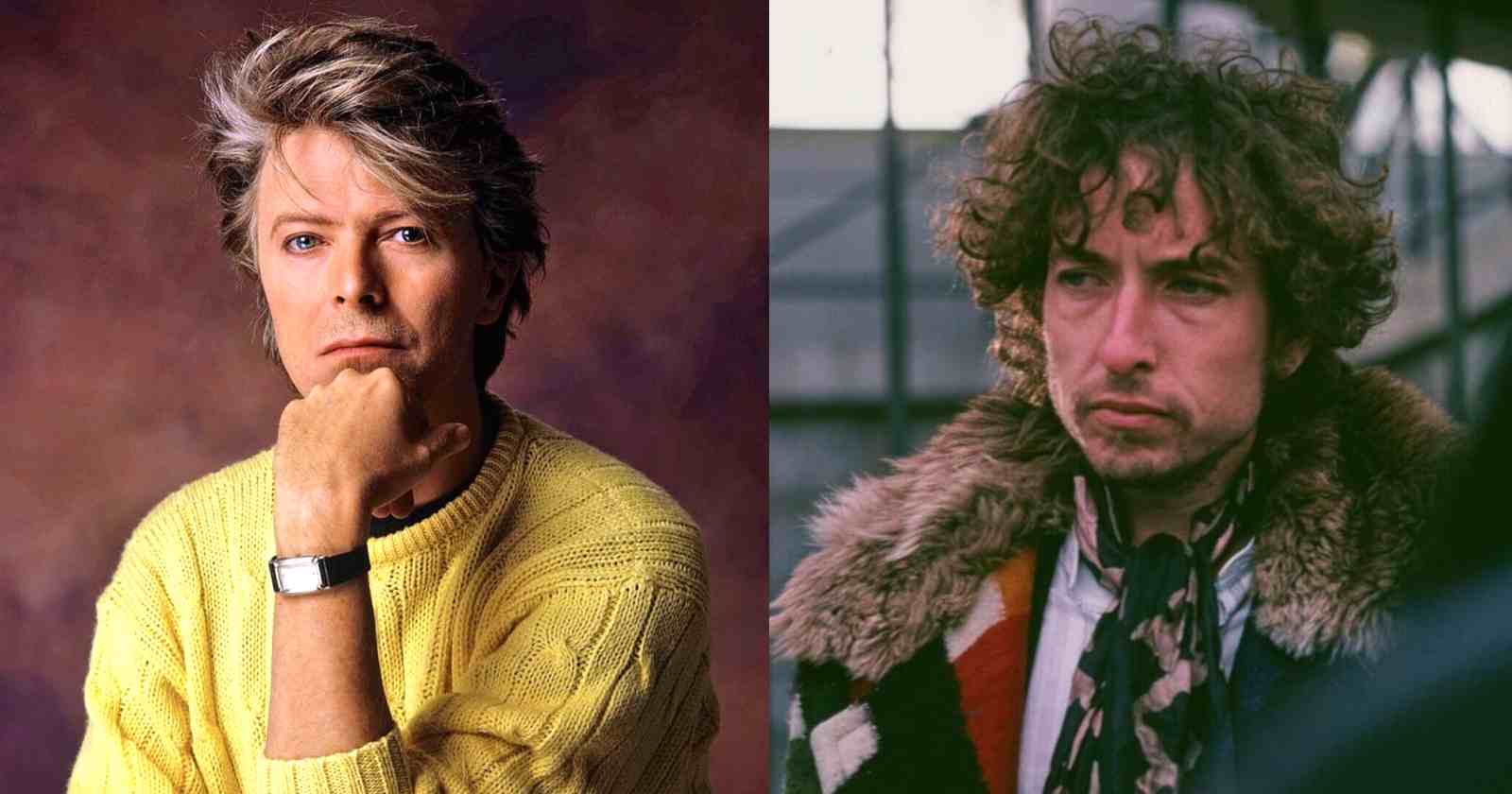 With an estimated amount of more than 100 million records sold worldwide and 26 studio albums released during his career, David Bowie is one of the most influential artists of all time. Being such a prolific and versatile songwriter, Bowie was not easily labeled as only one kind of artist, since he was always evolving and changing. Over the decades he talked about many of his peers and one of them was the also prolific and legendary songwriter Bob Dylan.

What is David Bowie’s opinion on Bob Dylan

David Bowie loved Bob Dylan and even released on his 1971 album “Hunky Dory” a track called “Song For Bob Dylan”, that is a big tribute to the American musician. Even though it was a great homage, it wasn’t Bob Dylan’s favorite song that he was mentioned in. When questioned in an interview with Bill Flanagan back in 2017 which was his favorite, the interviewer mentioned the Bowie song, John Lennon‘s “Yer Blues” but Dylan picked Ricky Nelson’s “Garden Party” as his favorite.

Curiously, the two legendary artists almost formed a duet at one point as Bowie recalled in an interview with BBC Radio 6’s Marc Riley (Transcribed by Rock and Roll Garage) back in 2004.

“I wrote a lot of things with Dylan. Actually not many people know that. Me and Dylan we were going to do a duet thing at one time. We got it in our heads that we could do it a duet like Art & Garfunkel thing but in the next morning I didn’t hear another word from him,” David Bowie said.

“His comeback since the beginning of the nineties is simply spectacular and this positive tendency will continue. Of this I am quite sure. His albums have a great class to them. Even those albums where he is actually playing songs of long-dead blues singers.”

“His writing, his song texts, leave me speechless. To a certain extent it’s a disadvantage for him that in certain circles today it’s not exactly fashionable to listen to Bob Dylan,” David Bowie said.

During the same conversation Bowie said that Dylan doesn’t write thinking about others. He writes for himself and is never worried about what is the trend of the moment. “Dylan is a writer in the original sense of the word: you write, but you’re not a supplier for consumers. Period. End.”

David Bowie compared himself with Bob Dylan and The Rolling Stones

Since David Bowie could not be easily labeled into just one kind of music, Countdown asked him back in 1990 (Transcribed by Rock and Roll Garage), who he saw as his competitors in the music business. The artist said that he didn’t felt like he had any competitors and used Bob Dylan and The Rolling Stones as examples of artists who really can’t be compared to others.

“I would say that I stay out of it, I’d like to say that. Whether that’s true or not, I don’t know. You could tell from the outside. But I don’t really feel that. I feel that frankly over the last 20 years or so I’m pretty much my own man. I suppose is very cheeky of me to put myself in the same light. But if I look at Bob Dylan, he doesn’t have competition, he is just Bob Dylan. Whether you like him or don’t like him. Whether he does good stuff or bad stuff, he is still Bob Dylan.”

“You don’t compare him with anybody. It’s not a competitive kind of thing. It’s the same with The Stones. I know they create mock competitions for them with other bands. I’ve noticed in America it’s been happening. But there is really no way that you can compare The Stones with anybody. And I would hope, I think I’m probably am in the same kind of position. I’m David Bowie, I’m either good, a pile of shit. I’m accesible or not accesible, obscure, very commercial. I changed all the time. But I’m still me… no (laughs),” David Bowie said.

Bob Dylan is not only known for being an amazing songwriter, but for being a really prolific songwriter with hundreds of songs written during his career. David Bowie said in an interview in the early 00s (Transcribed by Rock and Roll Garage) that he was jealous of Bob Dylan because he wrote so many songs and had a vast catalogue to chose songs to perform live in concert.

“50 songs isn’t enough, I’ve realized. I heard green with envy that Dylan’s got like a 140 songs he chooses from. I can say that you got to build up to that. Because even when you’ve got 50, there are some that you’re gonna get fed up with faster than others. So that 50 becomes kind of a 30 with an unwritten 20 that you don’t actually want to ever play again. So I think you have to go to at least 100 to then end up with like 50 that you like doing,” David Bowie said.