The last Big 4 show, featuring Thrash Metal Metallica, Slayer, Megadeth and Anthrax, took place in September 2011 and since the announcement that Slayer will end its activities, Megadeth frontman Dave Mustaine has spoken openly about his want to join the bands for the last time.

During an interview with Eddie Trunk, Mustaine revealed that he already has some ideas for the shows: “If you ask the three of us [Megadeth, Slayer and Anthrax], we would probably all say yes (…) If they want to do it and Metallica no, so we can make a … Big 3? ” 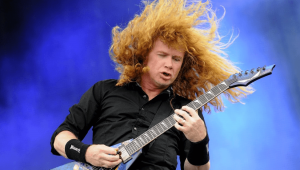 “I’m sure people would love to see that. And that’s it, maybe we could do a Big 3 plus the Exodus, “he continues.

He ended by saying that he would love Metallica to be a part of the shows, but only if all the bands were treated equally, “If everyone plays together and everybody has the same time to play, with the stage on the same conditions … But I do not think that will happen.”