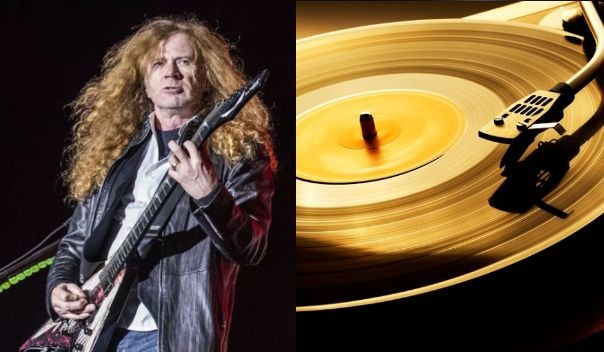 In an interview with College Radio News Network, Megadeth’s leader Dave Mustaine was asked to reveal his top 3 vinyl albums.

“If I was forced to pick my top three vinyl albums, I would probably pick some old classics, because of the tonality of the instruments back then and a lot of the analog amplifiers, as well as the analog consoles and analog recording devices. Same thing with the analog microphones.

“And, like I said, to me, all of the analog equipment and the chain, the series of all of the parts, as much analog as possible, to me, had a really warm sound.

A phonograph record (also known as a gramophone record, especially in British English, or record) is an analog sound storage medium in the form of a flat disc with an inscribed, modulated spiral groove. The groove usually starts near the periphery and ends near the center of the disc. At first, the discs were commonly made from shellac; starting in the 1950s polyvinyl chloride became common. In recent decades, records have sometimes been called vinyl records, or simply vinyl.