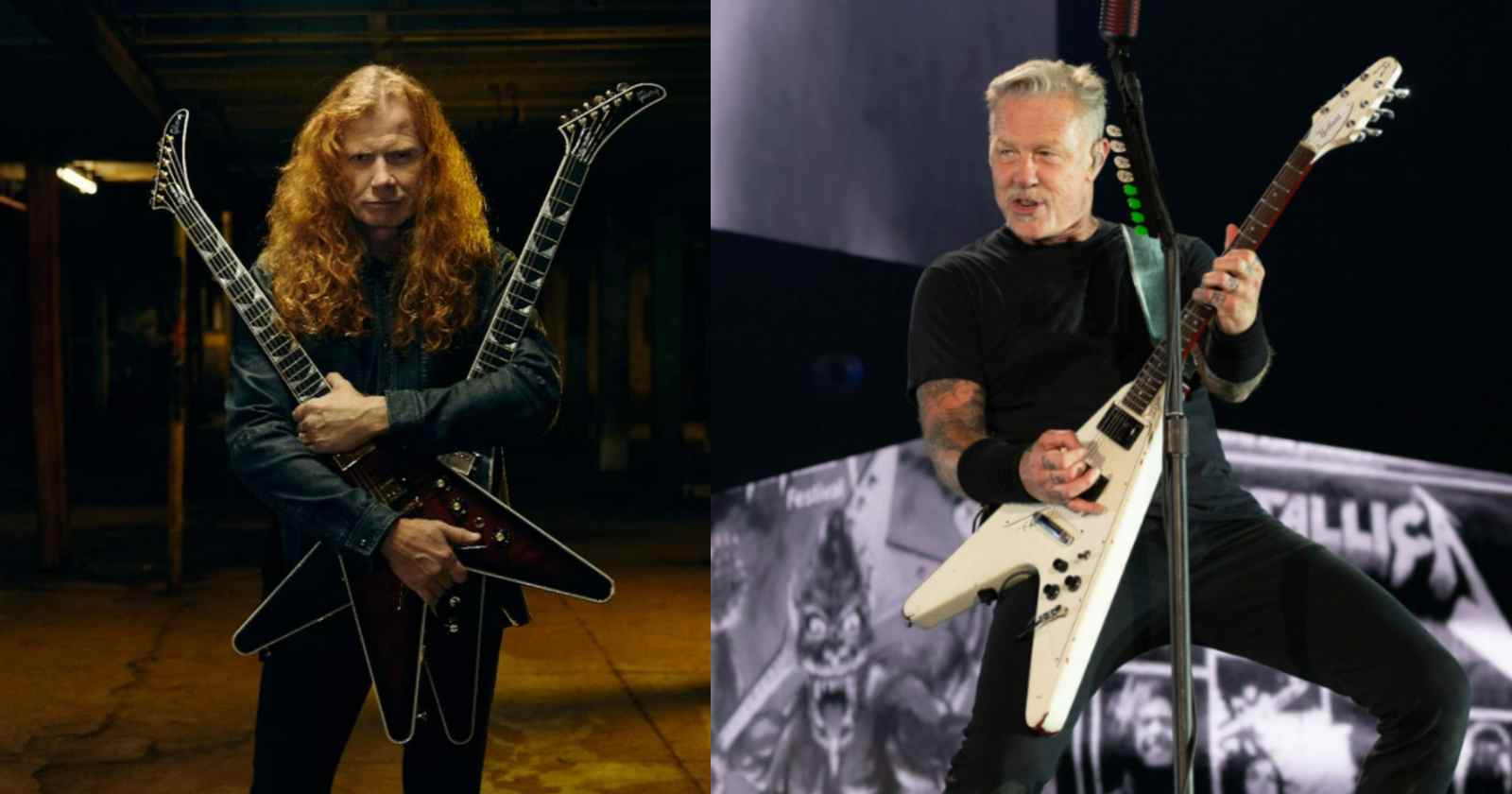 Images from Gibson and Brett Murray

Dave Mustaine was a member of Metallica from 1981 until 1983 and was really important to help the band to find their sound. It’s not a coincidence that they even used many of his compositions on their first albums two albums released in 1983 and 1984. But the group had already a new guitarist Kirk Hammett, that played alongside James Hetfield. Meanwhile, Mustaine had formed Megadeth, that would also become one of the most important Thrash Metal bands of all time.

In Megadeth Mustaine became also a singer, so he couldn’t always play the lead guitar like he used to do in Metallica, making him focus more on the rhythm guitar parts most of the time. Those new characteristics made him be compared a lot over the years with James Hetfield, that is the vocalist and rhythm guitarist of Metallica.

Since Dave Mustaine was fired from the band not long before they record their first album, the relationship between him and Hetfield has not always been good. But over the decades, Hetfield talked about the musician and even gave his opinion on him as a guitarist.

James Hetfield is often praised by the fans for being Metallica’s main lyricist and for the unmistakable vocal performances in every track. However, his guitar playing is equally important for the band’s success over the decades and Dave Mustaine recognizes that more than anything, since he chose his ex-bandmate as one of the best rhythm guitars players in the world in an interview with Rock Cellar Magazine back in 2017. In that same conversation the Megadeth leader also said that there are a lot similarities between him and Hetfield as guitar players.

“If you put the two of us together side-by-side, split a TV monitor in half, and had us both hopping around onstage. there’s a lot of similarities. The way he acts and moves with his guitar and stuff like that. I think James is one of the best rhythm guitar players in the world.”

“As far as rhythm guitar players are concerned, there’s James, there’s me, there’s Malcolm Young and there’s Rudolf Schenker. There’s no one else that touches the four of us. We’re the fantastic four.” Dave Mustaine said.

Even though Metallica became one of the biggest bands in the history of music with more than 125 million records sold worldwide and were even inducted into the Rock and Roll Hall of Fame in 2009, James Hetfield fought since his youth against many self-low esteem issues. More recently in 2022, during a concert in Belo Horizonte, Brazil, he told the crowd he was feeling insucre about his guitar playing. He also said that his bandmates are the ones who always helped him during those times.

A few months after that show, Dave Mustaine revealed to Classic Rock that when he saw Hetfield’s sincere statement, he texted his ex-bandmate. He praised him and told him he is a “mind-blowing talented guy”.

“I sent a text message to James just a couple of days ago after he’d said that he was insecure about his playing. I said: ‘James, I love you and I really like your playing.’ He didn’t answer. Of course not. Why would he? The point is I wanted him to know that I’ve had those feelings too. But I don’t now.”

“I must remind you that when I joined Metallica, James did not play guitar. He just picked it up and started playing when I was in the band. But let’s be honest, James is one of the best metal guitar players in the world.”

“So for him to have those feelings, that’s a lie, because he’s a mind-blowingly talented guy. So I just felt I needed to say something to him. I didn’t tweet it. I didn’t want anybody to know what I said. But I’m telling you because, hey, you brought it up!” Dave Mustaine said.

Dave Mustaine believes that James Hetfield plays faster than him

Even though Mustaine is certainly one of the fastest guitar players in the business, he belives that Hetfield can play faster. He was questioned in 2022 by fans in an interview with Revolver Mag in 2022 (Transcribed by Rock and Roll Garage), who was the fastest “down-picker” from the bands of the Big Four of Thrash Metal. He also said in that same conversation that the Metallica frontman is “one of his favorite living guitarists”.

“Fastest ‘down-picker’? I don’t know if that would be me. It would probably be Hetfield or Kerry (King), who is a very fast player. He is talented at what he does. I never really watched his picking method to see if it was down-picking. Or it was pedaling, which goes back and forth.”

“(So) it’s gotta be James or Kerry. I’d love to say it’s me. I’m sure I’ve got some really fast down-picking stuff. But I still think those guys are great and Hetfield is still one of my favorite living guitar player. (…) I really respect him, I really respect his playing. (So) I hope he knows that there are a lot of people out there like me that like him a as a person,” Dave Mustaine said.

Dave Mustaine already said that the “real talent in Metallica” are in the guitars, not the drums

No matter how successful a band is, their music will never be perfect for all the music fans. One thing that always bothered some Metal fans over the decades is Metallica’s drums played by the co-founder of the group Lars Ulrich. There are many comparisions between him and the drummers from other bands of the Big 4 of Thrash Metal, that have different styles that bring more heaviness many times to their sound.

Dave Mustaine agrees with that since he told in an interview with Songfacts in 2022 that “the real talent in Metallica has always been around the guitar”.

“I would love to work with James. I’d like to work with Lars again, too. But I think the real talent in Metallica has always been around the guitar. Everybody makes fun of the drums. You know what that was?

“Lars is a really great song arranger. And believe it or not, I watched him on a piece-of-shit acoustic guitar write the opening riff to ‘Ride The Lightning’.”

“It was a guy with a guitar that doesn’t know how to play. He’s going [mimics playing a chromatic run] on the neck. It wasn’t anything really mind-blowing by any means. The way James played it made it mind-blowing.”

Mustaine was then told by the interviewer that the song he hummed was actually “Master Of Puppets”. So he then explained that he doesn’t really know the name of the songs of Metallica since he don’t listen to them.

“Yeah, whatever that is. I don’t fuckin’ know their song names, I don’t listen to them. I totally respect them, I just don’t listen to them. It’s not out of me not liking them. When they come on the radio in my car, a long time ago I would change the channel. But I don’t do that anymore. It’s just music. I’ve been able to put all that stuff behind,” Dave Mustaine said.