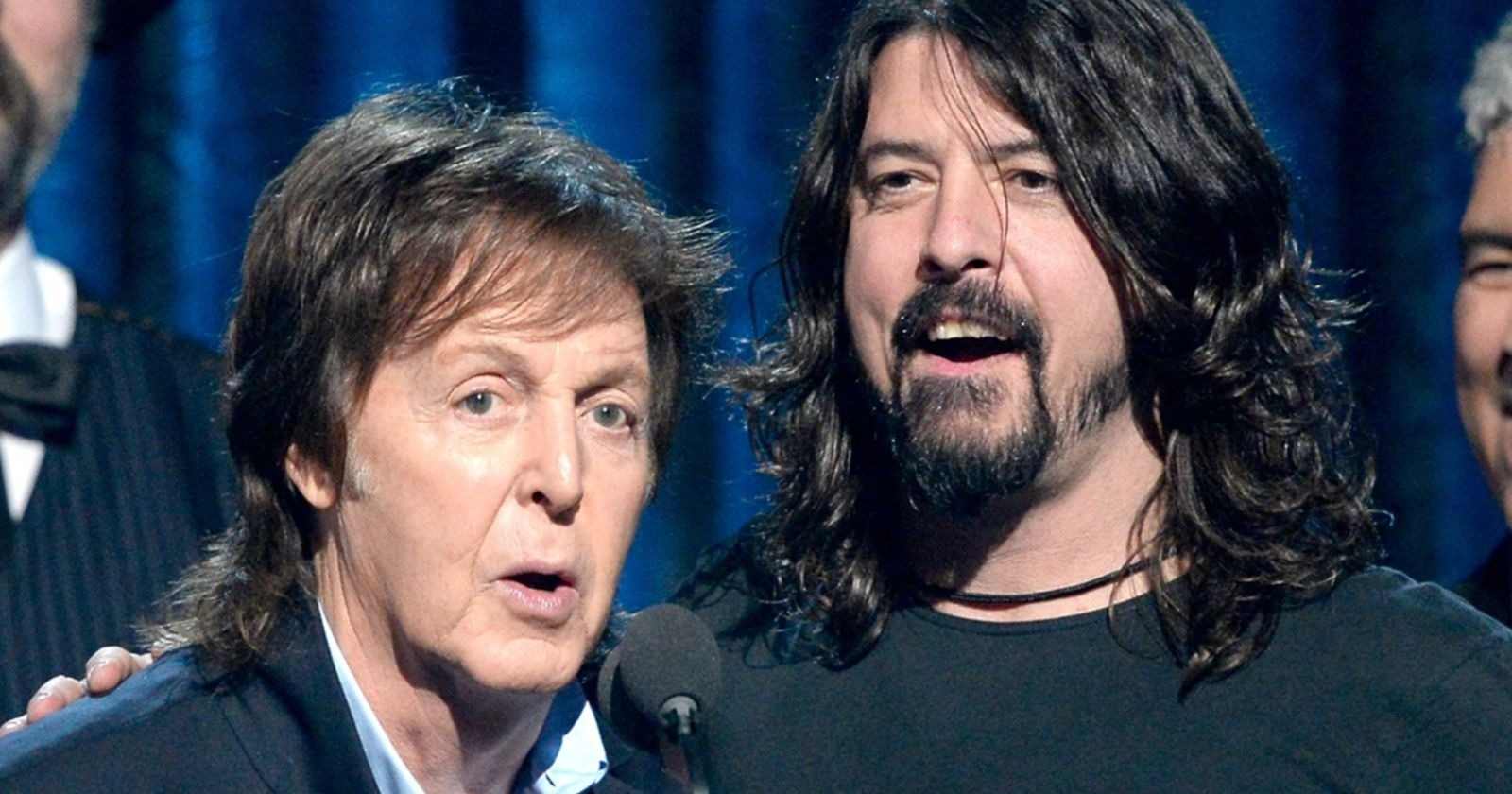 Foo Fighters‘ Dave Grohl revealed his 14 favorite Beatles songs of all time and explained why during an interview with BBC Radio back in 2019. He said in other occasions that if weren’t the George, Paul, John and Ringo he probably wouldn’t be a musician.

“The track I performed alongside ELO’s Jeff Lynne at a Grammy celebration in 2014. It was to mark the 50th anniversary of their first performance on the Ed Sullivan Show, and although it wasn’t one of The Beatles’ greatest hits, to me, it’s a quintessential Beatles rock ‘n’ roll song.”

“Since it’s the 50th anniversary of ‘Abbey Road,’ I thought that I’d start playing songs from that album, and the one that stands out to me the most, and has always been my favorite from that record, is called ‘I Want You (She’s So Heavy)’. Of course, I love heavy music, I love Black Sabbath, I love Motorhead, but I think that nothing is heavier, melodically darker and deeper than the riff in this song,” Dave Grohl said.

“This next song is from the ‘Revolver’ record released in 1966; the opening track, ‘Taxman,’ a George Harrison song. It’s one of my favorite riffs and rhythms of all Beatles songs. I love the chords, I love the melody, I love the snare sound… I mean, you have to imagine that in 1966 they were inventing a lot of rock ‘n’ roll recording by figuring out new ways to engineer these sessions.”

“My favorite Beatles song by George Harrison, ‘Something.’ I think that of all The Beatles – of course, each one of them is so entirely different, melodically they’re so different, songwriting, lyrically – but George Harrison, there was something about him that I almost preferred the most. I loved every single one of them for different reasons but I kind of connected to George Harrison’s sense of melody more than anyone,” Dave Grohl said.

“On February 9th, 1964, America got to see The Beatles for the first time. That performance on the Ed Sullivan Show, five songs went on to change the course of rock music forever. Most musicians that I’ve talked to that got to witness that on television live for the first time said it changed their lives forever. Five songs: ‘All My Loving,’ ”Till There Was You,’ ‘She Loves You,’ then a 35-minute break, and a second set where they played ‘I Saw Her Standing There’ and ‘I Want to Hold Your Hand.'”

“The first Beatles song I’d ever heard and it might be the first record I ever listened to. I remember having a sleepover at a friend’s house when I was maybe four or five years old and listening to ‘Hey Jude.’ I don’t think I’d ever listened to a rock ‘n’ roll record and this was my introduction and it stuck with me ever since.”

“If there’s one song that reminds me of being a kid, it’s ‘Eight Days a Week.’ Now. There was a girl that I was in love with. She will remain nameless. Who lived down the street from me when I was maybe 12 or 13 years old. We decided that we were going to be boyfriend and girlfriend, which at the time was really nothing more than walking to school and talking on the telephone. But we had to pick a song, a song that would be our song. So, we picked ‘Eight Days a Week,'” Dave Grohl said.

“I Am the Walrus”

“This next song is from the ‘Magical Mystery Tour’ record, released in 1967, ‘I Am the Walrus’ sparked a lot of controversy and fueled the conspiracy theory that was Paul McCartney’s death and replacement with a Paul McCartney lookalike.”

“When people listen to this song, that theory is only fueled by the lyrics. But when I listen to the song, I listen to the subtle nuance of the brilliant engineering that went into making this record from the awesome floor-tom overdub towards the end to the studio panning left to right.”

“I remember the first time I went into Abbey Road Studios. The Foo Fighters were there to record a cover song, so I did a lot of snooping around. I did a lot of walking through hallways and looking through windows and, you know, to me, I felt like I was just in the mother church of rock ‘n’ roll.”

“And when I think of that first visit there. I think of the song ‘Because’ off of the ‘Abbey Road’ album, but more so if you’ve ever seen the ‘Love’ show in Las Vegas. It’s one of the most incredible experiences – not just the performance, but sonically, as the house lights go out just the vocal track from Because comes on and within seconds you feel like you’re floating in space,” Dave Grohl said.

“The next song I want to play is from the ‘Let It Be’ record, released in 1970, called ‘Two of Us.’ This song reminds me of a trip I took with my mother and sister to Ireland in 1992 the week before Nirvana was headlining the Reading Festival.”

“I’ll never, ever forget the first time I met Paul McCartney, considering how important The Beatles are to me and how influential and inspired I was learning to play these Beatles songs when I was young. You can imagine it was just huge, it was a huge life experience,” Dave Grohl said.

“With a Little Help From My Friends”

“This next song is from the infamous ‘Sgt. Pepper’s’ record. Now, you didn’t think I was gonna let you go without playing a Ringo song? Beyond being one of the greatest drummers of all time. He also sang some of the most memorable songs of all time.

“‘Yellow Submarine’ is without a doubt the catchiest song ever written. It doesn’t matter if you’re five years old or 95 years old, everybody loves to sing along to that song. But I have to say. My favorite song that Ringo Starr ever sang was ‘With a Little Help From My Friends.'”

“This last song comes from the ‘Rubber Soul’ album, released in 1965. It means a lot to me because it was the song that was played at Kurt Cobain’s memorial. That day, after everyone had said their piece, this next song came over the speakers and everyone got to celebrate Kurt’s love of The Beatles one last time together,” Dave Grohl said.