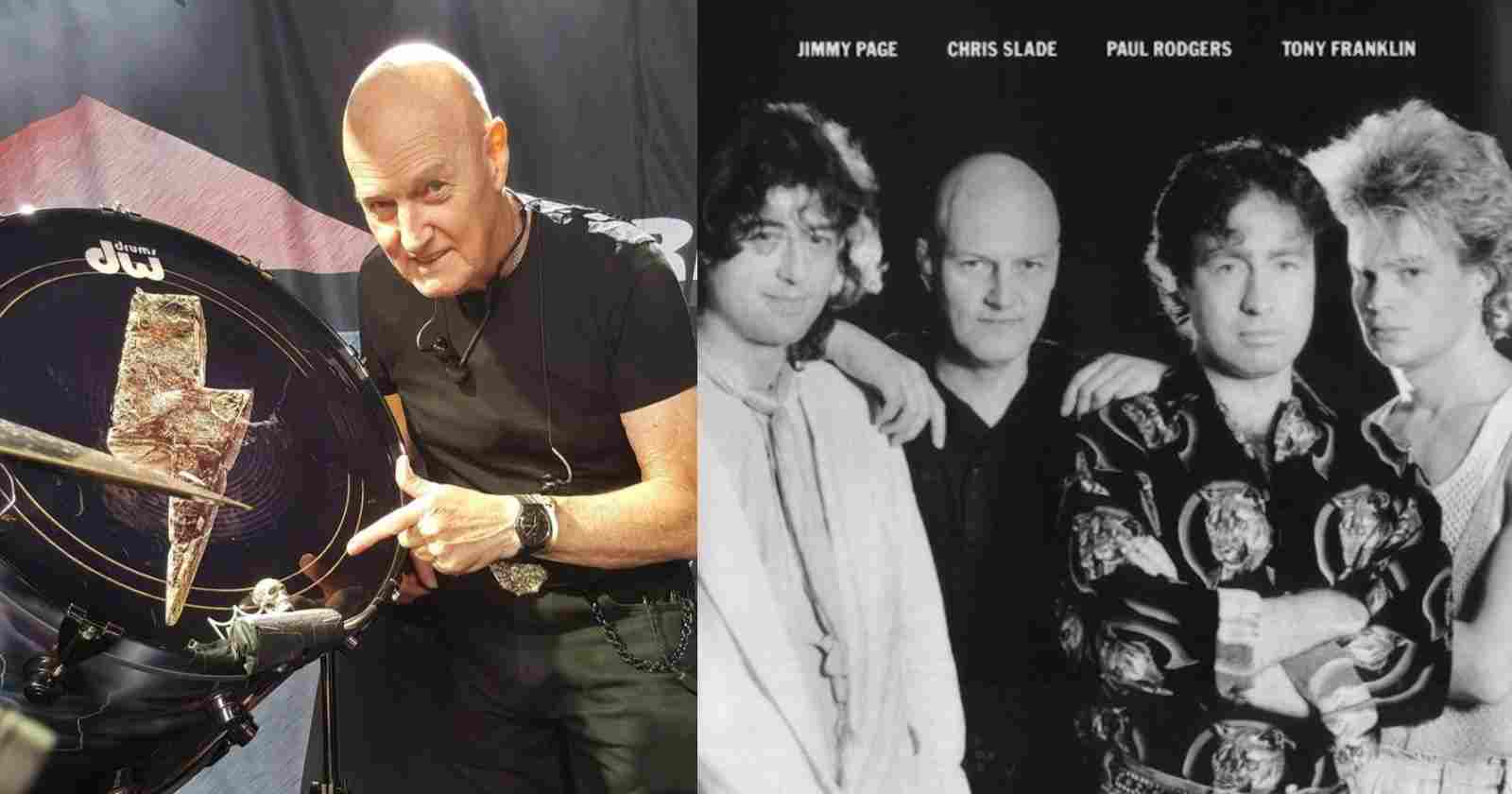 Legendary drummer Chris Slade that already played with Gary Numan, Tom Jones, Uriah Heep, Manfred Mann’s Earth Band, David Gilmour and AC/DC talked in an interview with Rolling Stone how he was invited to be on the supergroup The Firm with Jimmy Page and Paul Rodgers back in the 80’s.

Chris Slade recalls when he was invited to The Firm with Jimmy Page and Paul Rodgers:

“To back up a bit, I got this call from Dave Gilmour. It was like, “Hello, Chris, Dave Gilmour here.” I looked at the phone to see if I was hearing correctly. “I’m putting a band together. I’d like you to play drums.” I said, “Dave, that is absolutely fantastic. But I’m working with Mick Ralphs’ band.” They were friends, [he and] Mick Ralphs from Bad Company. He said, “That’s all right. Mick is doing it too.” I thought, “Oh, fantastic.” And I said, “OK, Dave. We’ll sort it all out and I’ll see you soon.” He said we were going to start in about a month or so.”

“So I said to my wife, “OK, we’re going down to the pub to celebrate.” We went down to the pub and had some lunch and some beers. We came back and the phone rings. So I pick up and hear, “Hello, it’s Jimmy Page here.” I’m going, “Come on, friend. I know it’s you. Stop messing about.” “No, no, no, no. It really is Jimmy Page.” “How are you, Jim?” We’d never met, but we had mutual friends. “Me and Paul Rodgers are putting a band together and we’d really like you to play drums.”

“I was thinking, “Oh, God, that’s the end of it now.” And he goes, “That’s all 0right. We’ll wait.” Holds phone away from face. Stares at phone for about 30 seconds. Couldn’t believe it. “OK, we’re not in any sort of rush, really. How long is the tour?” I said, “I think it’s going to be three months. Well, keep me in touch and we’ll see what happens when it finishes. But we definitely want you to play drums.” I went, “OK, thanks a lot. Thank Paul and I’ll call you and keep you informed with what’s going on.” We definitely went to the pub after that. Again.”

“I have it written down somewhere, the only time I’ve ever done that. I wrote the date in red.”

Tell me about the decision to tour with the Firm and not play any songs by Free, Bad Company, or Led Zeppelin. I’m sure the audiences were dying to hear that stuff.

“Absolutely. And I wish we had. I really wish we had. It flowed like a really great band. Why wouldn’t it? One of the greatest singers ever. Certainly blues singers. And one of the greatest guitarists. And Tony Franklin on bass, of course. As he said himself, he’s a monster. A fretless monster. It was great. I had a great time. But as you can imagine, Tony and I had nothing to do with the input for the band. It was Paul and Jim.

To me, it was suicidal not to do Bad Company or Free or anything like that, or Zeppelin. To me, that was just not the thing to do. I come from the showbiz side of things. As I say, my father was a tap dancer. You do everything you can to entertain the public,” Chris Slade said.