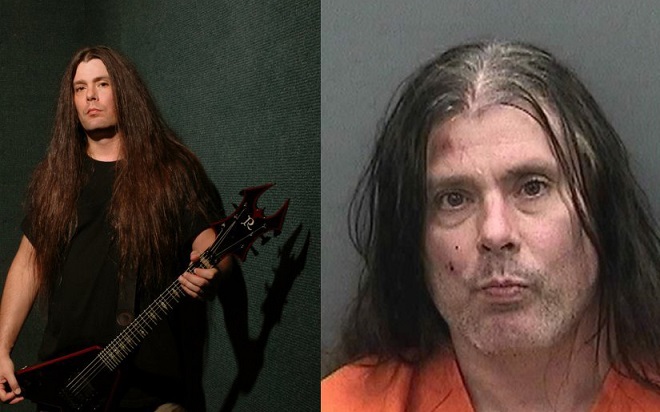 Guitarist Pat O’Brien from Cannibal Corpse was arrested for robbery and for threatening a police officer after breaking into a house in Florida. Meanwhile, the guitarist’s own house caught fire.

O’Brien allegedly broke into a house and ran into the yard. When the policemen arrived, the guitarist didn’t obey the orders and threatened one of the agents with a knife. Then the guitarist was knocked over with a taser and taken away.

At the same time, firefighters battled to put out the fire in the house where O’Brien lived. Apparently, the guitarist ran away from home as soon as the firemen arrived. The cause of the fire has not yet been confirmed, but firefighters have had difficulty erasing it because of a “military-style flamethrower” on site.

O’Brien was indicted for assault and for threatening a law enforcement officer with a deadly weapon.

The band has had little radio or television exposure throughout its career, although a cult following began to build after the release of the 1991 album Butchered at Birth and 1992 album Tomb of the Mutilated. As of 2015, they achieved worldwide sales of two million units for combined sales of all their albums, making them the top-selling death metal band of all time.

Guns N’ Roses reunion tour has ended, see how much money they made
Deadpool defends Nickleback in new teaser of Christmas movie and band reacts
Advertisement
To Top