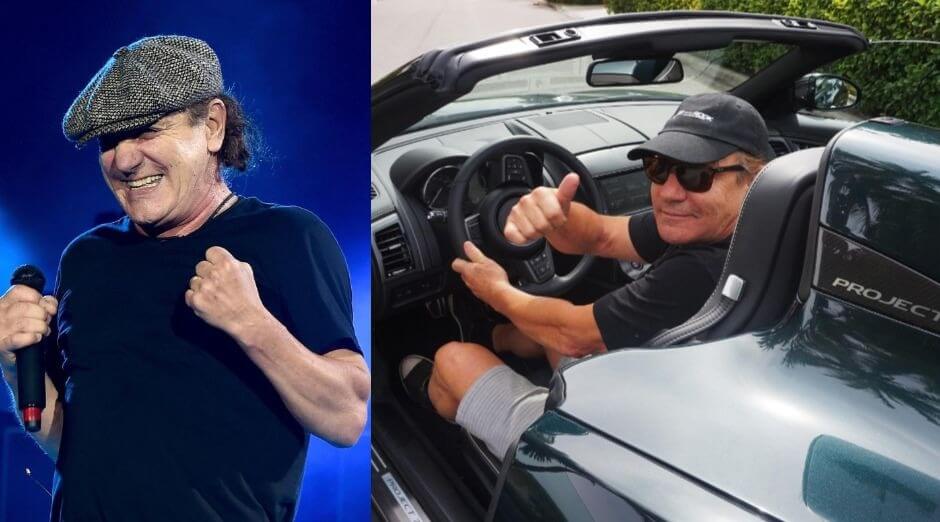 Besides being AC/DC’s singer Brian Johnson is also a car fanatic. The musician owns many classic vehicles and even was a racing driver sometimes. In an interview with The Sunday Times back in 2014 he talked about his collection and revealed his 11 favorite songs to listen while driving.

Brian Johnson and his 11 favorite songs to listen when driving:

“Low Rider” is a song written by American funk band War and producer Jerry Goldstein. The song is from their album Why Can’t We Be Friends? released in 1975. It reached number one on the Billboard R&B singles chart. Also peaked at number seven on the Hot 100 singles chart. In addition to number five in Canada. Is also famous for being on the soundtrack of Cheech & Chong‘s movies.

One of ZZ Top‘s biggest hits, “La Grange” is from their 1973 album Tres Hombres.  The song refers to a brothel on the outskirts of La Grange, Texas (later called the “Chicken Ranch”). The brothel is also the subject of the Broadway play and film The Best Little Whorehouse in Texas.

The Who’s “Magic Bus” was recorded in 1968, three years after being written by Pete Townshend. One of the band’s biggest hits it reached No. 26 and No. 25 in the US and the UK, respectively.

“Whole Lotta Love” is one of Led Zeppelin‘s most famous songs. Recorded in May 1969 and released as the opening track for their second studio album Led Zeppelin II on November 7, 1969. It was originally recorded in several studios in New York and Los Angeles during the band’s second US tour and produced by Jimmy Page at Olympic Studios in London.

George Thorogood “Bad To The Bone”

George Thorogood’s “Bad to the Bone” was released in 1982 on the album of the same name. While it was not widely popular during its initial release, its video made recurrent appearances on the nascent MTV, created a year before. Licensing for films, television, and commercials has since made the song more popular.

“Hot Rod Lincoln” is a song originally recorded by American singer-songwriter Charlie Ryan, first released in 1955. It was written as an answer song to Arkie Shibley’s 1950 hit “Hot Rod Race” which describes a race in San Pedro, Los Angeles between two hot rod cars, a Ford and a Mercury, which stay neck-and-neck until both are overtaken by “a kid in a hopped-up Model A”.

“Baby, Please Don’t Go” is a blues song composed by Big Joe Williams. It was re-recorded by several artists, such as: Gary Glitter, AC / DC, Aerosmith, Van Morrison (in the band Them), Ted Nugent, Budgie, among others.

“American Pie” is a folk-rock song released by singer-songwriter Don McLean. Recorded for the American Pie album in 1971, this single reached No. 1 on the US charts in 1972, remaining in this position for four weeks. The song recalls the “day the music died” – the plane crash that occurred on February 3, 1959 that took the lives of Buddy Holly, Ritchie Valens, The Big Bopper and pilot Roger Peterson.

Status Quo “Down Down”

One of Status Quo’s biggest hits, “Down Down” was Written by Francis Rossi and Bob Young. It was their only number one single on the UK Singles Chart. The single spent a week at the top of the chart in January 1975.

Rolling Stones “Start Me Up”

Start Me Up is one of the most famous songs by The Rolling Stones. Composed by Mick Jagger and Keith Richards the song was released as a single on the 1981 album Tattoo You. In addition, the song reached # 2 on the Billboard Hot 100, and # 7 on the UK Singles Chart.

*Note: The source of the list is Brian Johnson’s playlist on Sunday Times’ official Spotify profile. But we think it would be strange that Brian Johnson would recommend Quiet Riot‘s cover for “Highway To Hell”. However, the playlist shows the American Hard Rock band version. So that’s the reason why Quiet Riot’s version is here.