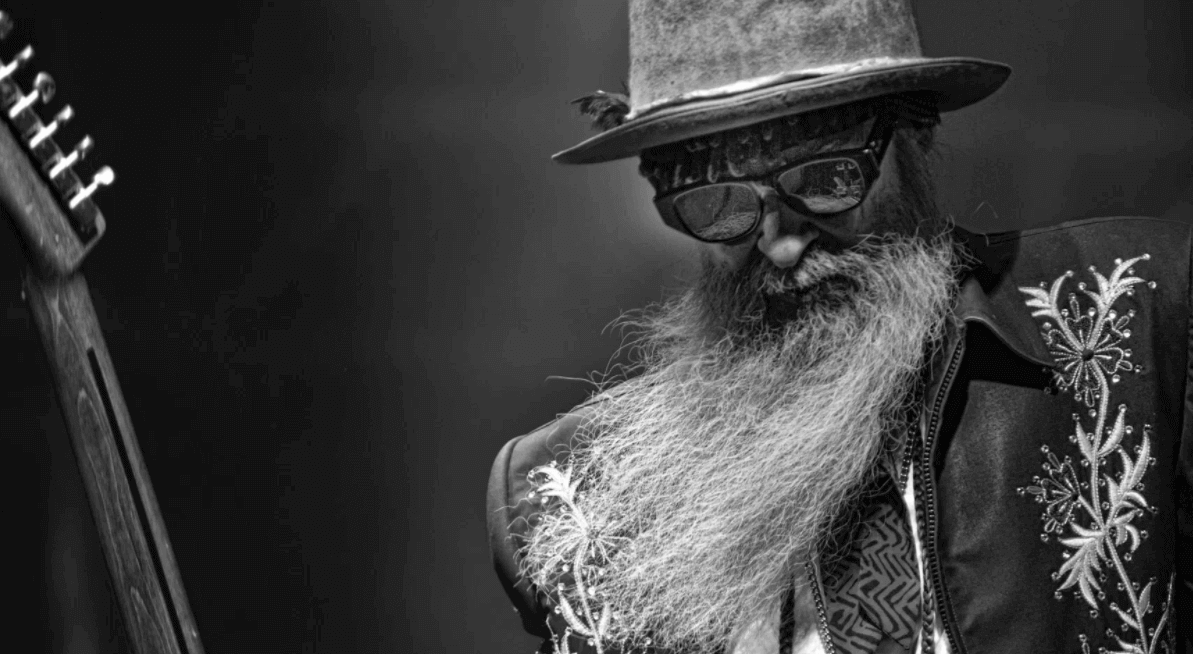 ZZ Top frontman Billy Gibbons was experiencing a rare bit of downtime when he phoned into Rolling Stone for a Last Word interview in late October. ZZ Top had just postponed their remaining 2017 dates while bassist Dusty Hill dealt with what a press released called a “tummy ailment,” and Gibbons had yet to begin his current solo tour.

That gave him plenty of time to reflect on his long life and share some wisdom as he barreled down the highway on his way to a recording session in Nashville. “This was an unexpected treat,” he said at the end of the hour-long conversation. “Thank you for giving me something to think about on this ride.” 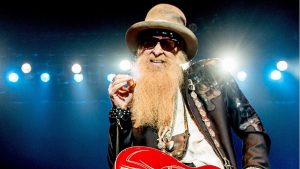 What’s the best advice you ever received?

What do you do to relax?

I have had the good fortune to be invited into the secret world of Jimmy Shine, a California hot-rodder who really knows which way is up. He lets me tiptoe into the garage and pick up a wrench and a torch once in a while. 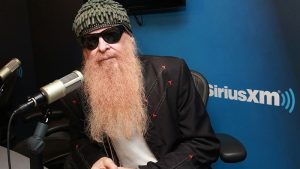 What’s your favorite city in the world?

Las Vegas. One of my favorite houses is located there. I’m on musicians’ hours, and Vegas rolls 24/7. Also, everything is square, nothing is round in Las Vegas. When you live this kind of uncertain life from being on the road, you don’t like sitting in chairs with a round arm. You like sitting in a nice square chair because it has identifiable corners.

Oh, yeah. We throw them bones. We like to step up to the craps table and look for that 7/11.

What was your favorite book as a child, and what does it say about you?

Junior’s Fun to Draw. I think it was originally published in 1944, and if you’re lucky, you can find one on eBay. That book taught the left hand to watch the right hand. It teaches you how to draw page by page. It starts out with circles and squares and ovals, and then you put them together. Very informative. 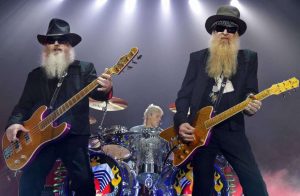 What’s your favorite book of all time?

It’s a surreal book by Haruki Murakami called Hard-Boiled Wonderland and the End of the World. I find myself rereading it every couple of years. Definitely a bit on the creepy side. It’s effective in dragging you out of incessant thinking, because the creative mind, it will not leave you alone. There’s a great saying: “For the artistically inclined, just remember you don’t have to swing at every pitch.”

What’s your favorite movie of all time?

The Passenger with Jack Nicholson and Maria Schneider. I am a big fan of Michelangelo Antonioni, the director, and this is one of those disturbingly quiet type films, but it is really thought-provoking. It’s very soothing and it was shot in the deserts of North Africa. It has all these elements of intrigue that has the quiet feeling.

What’s the most indulgent purchase you’ve ever made?

I bought a Cadillac Eldorado convertible with my first royalty check. Triple white. This fascination with cars, old, new and everything in between, started with that really indulgent purchase. 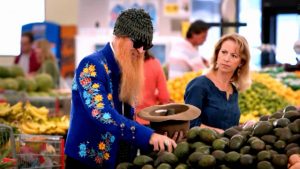 Gene Simmons says rock is dead. Do you think it is?

Maybe in his head. In my head it’s still quite a robust way to express yourself. You can really let go of the stress, which is really healthy.

I quite like it. That’s a great thing about growing up and hanging out in Houston. The hip-hop and rock scene was something that we really enjoyed. We would run into the hip-hop guys at Digital Services Recording. They wanted to know how to play the guitar, and all us rock guys wanted to know how to create those crazy backbeats. It was a nice exchange. 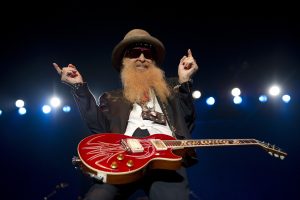 You toured with Jimi Hendrix when you were young. What did you learn from him?

He was a real technical wizard. He was inventing things to do with the Stratocaster guitar I am confident the designers had no clue that that would unfold in later years. Jimmy had the talent to make that work for him. His technique was very peculiar in that he was playing a right-handed guitar in a left-handed style, upside down.

To look at it and try to figure out what he was doing was very daunting. But we got to share opposing hotel rooms always at the end of the hall and the doors were always open. He had a record player delivered each and every afternoon, and he would motion to me, “Come on over here. Lets see if we can figure this out.”

And we wound up listening to Jeff Beck trying to figure things out. I said, “Jimmy, chances are that Jeff Beck is sitting there listening to you saying the same thing. ‘How do we do this?'” 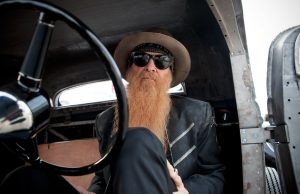 Everyone always talks about the negative aspects of the collapse of the recording industry. What are the positive aspects?

It’s now up to the individual to invent the kind of business offer that he thinks will work. You no longer are you slave labor to someone else’s wishes. I think it’s a glorious awakening to know you have the opportunity to step up and control your destiny.

Do you think if ZZ Top started today you guys would still make it?

If we embraced that same youthful enthusiasm that brought us together in the first place, it might just might well work. We threw caution to the wind and jumped into it with both feet, but all we wanted was to make loud noises, get free beer and chase the girls after the show. 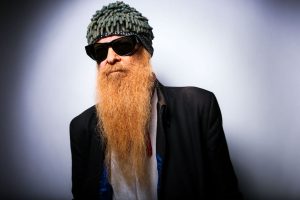 You didn’t get married until 2005. Why did you wait so long?

I could have gone down the aisle a number of times, but I came to the conclusion that this life is too short and you got to do everything you can while you can. I finally said, “OK, let’s try it out.” It’s been a splendid thing.

How would you rate Trump as a president?

It’s a hard job to fulfill. You got to let the guy who holds that place do the best they can. And it’s a topsy-turvry position. It’s very challenging no matter who is in the chair. But I don’t mind the guy. I mean, I have never been politically motivated one direction or the other. I am glad I don’t have to do it as I said it’s a challenge that really quite a great bit of fortitude and stamina. We will see. Frankly I don’t care. Just make sure we keep this country in a forward direction.

Do you have any thoughts on gun control in the wake of Las Vegas?

That was a tragic example of just some total insanity. It’s very difficult to predict, I don’t know if it’s so much control of guns as it might be control of idiots. It’s a challenging topic that really demands some insightfulness. Can we learn from an event like that unfolding? I don’t know anything more than I think we should remain vigilant and carry on and enjoy the world. We are really not sure who controlling the design over all of this thing we call life. 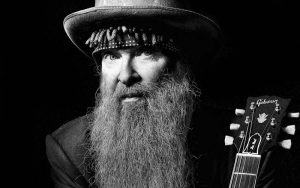 Have you ever been tempted to shave your beard?

Years ago, we were approached with a rather sizable sum to take a razor to the chin whiskers. We thought about it for a second. But we’re not sure what’s exactly under here, so we perhaps wisely passed. What was once a very peculiar physical appearance seems to have become a trend, which makes it a little more easy to walk down the street. In the past, we were taken for either an escapee from a Western movie or some kind of religious nut.

You drink beer through a straw to avoid getting suds in your beard. What else does the beard force you to do?

The one constant question is, “Is the beard under the covers or over the covers?” I guess that depends on the weather. If you take to sporting famous chin whiskers, keep in mind it goes where you go. It’s always important to keep your eye on the grooming shelf, make sure you bring along plenty of conditioner.

I’ve read that you sleep on the floor of hotel rooms rather than the bed. What’s up with that?

These days, they make these mattresses so soft and squishy, and it can be a bit unnerving if you are looking for something trustable. Throwing a pallet on the floor for me is just that. I make sure to make friends with housekeeping. They find it unusual that I ask for half a dozen extra comforters and half a dozen extra pillows and a blanket on top. 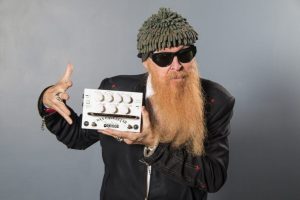 How does your wife feel about this?

She finally gave up. I mean, she will come down to what I call the picnic zone. And she says, “Oh, it’s sleepy-sleepy time. I have to get the biscuit.” So we got a good thing going on. If she needs a little attention, a little loving, I will crawl up and snuggle up. Gotta do that.

Well, yeah, I could do it. We are smack dab in the middle of a technological breakthrough that is making life extension quite a bit of the day-to-day norm. I read a prediction the real fireworks get underway about the 366 day cycle starting in the year 2024, in which 10-to-the-75-power seconds at the conclusion of that cycle will reveal scientific breakthroughs comparable to the creation of language or the experience of life itself. And then the last 10-to-the-75-power seconds of those seconds will reveal all that is knowable, but is unknown. That is quite a mouthful. It’s only seven years away, so let’s go for it.