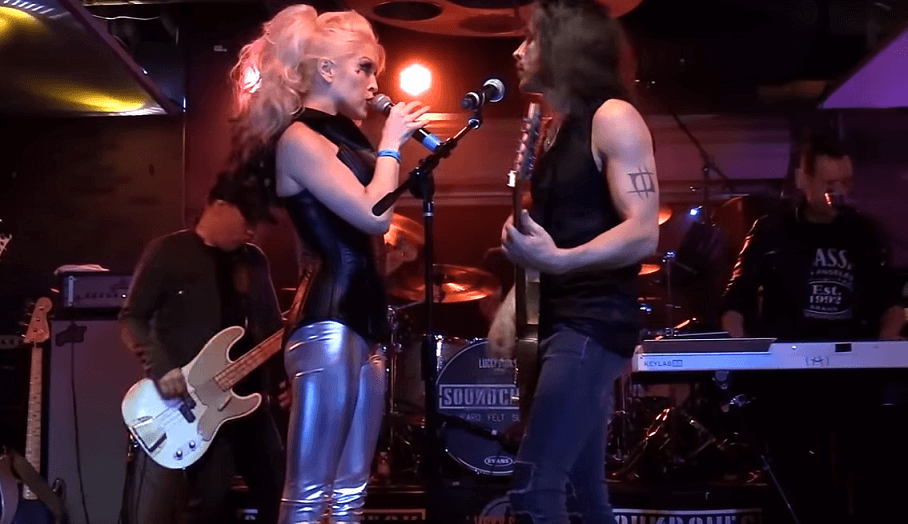 Back in 2017, the virtuoso guitarist Nuno Bettencourt (Extreme) performed with the talent Heather Lounsbury the song “Noticeable One” from Missing Persons.

Missing Persons is an American band that plays a blend of new wave and hard rock. The band was founded in 1980 in Los Angeles by guitarist Warren Cuccurullo, vocalist Dale Bozzio, and drummer Terry Bozzio. They later added bassist Patrick O’Hearn and keyboardist Chuck Wild.

Dale’s quirky voice and heavy makeup made the band a favorite on MTV in the early 1980s. Her revealing outfits played a pivotal role in moving the culture of music videos towards that of overt sexual exhibitionism.

Dale and Terry Bozzio met while working with Frank Zappa, and they married in 1979. Cuccurullo encountered the pair while contributing to the Zappa album Joe’s Garage (1979). O’Hearn was also a former member of Zappa’s touring band, and Wild had played with a variety of bands before joining.

You can see the original version below:

In 1980 the band made its first record, a 4-song EP entitled Missing Persons, in Zappa’s brand-new Utility Muffin Research Kitchen studios; the recording was financed by Cuccurullo’s father. The band toured, promoted the EP, appeared in the movie Lunch Wagon (1981), and became a must-see band among the Los Angeles live music crowd. “Mental Hopscotch” was a No. 1 record on local radio station KROQ-FM, and the self-promoted EP sold 7,000 copies.

Two years of hard work led up to a signing with Capitol Records in 1982. With label support, the re-released EP sold another 250,000 units, and the new full-length album Spring Session M (1982, an anagram of ‘Missing Persons’) went gold.