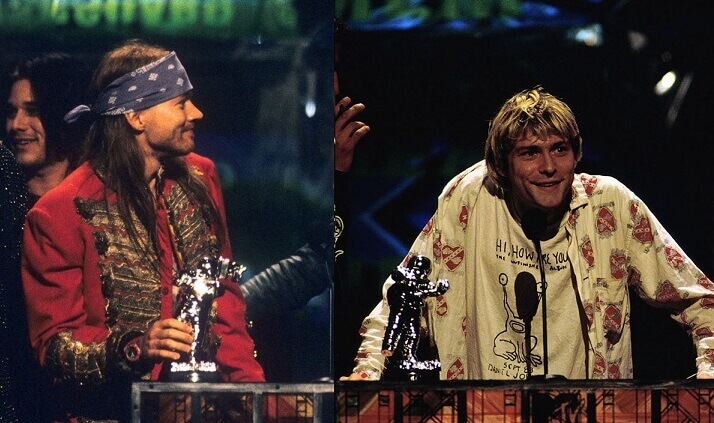 In a Adrian Harte’s new book “Small Victories: The True Story of Faith No More” has leaked to the internet and Alternative Nation posted an excerpt that Axl Rose talks about why Grunge bands hated him so much.

“[Faith No More bassist] Billy Gould discussed Axl Rose and Slash confronting Faith No More while on tour about their attitudes.

“An ‘upset but not irate’ Rose began his comments by saying, ‘I only like you guys, Nirvana, Jane’s Addiction, and two other bands, and all of you hate me. Why do you hate me? It’s like I went away and came back home to find you guys fucked my wife.'”

One of the other two bands was likely Soundgarden, who opened for Guns N’ Roses. GN’R also performed “Black Hole Sun” live in honor of late Chris Cornell, and covered “Big Dumb Sex” on their 1993 covers album “The Spaghetti Incident?”.

About his bad relation with Kurt Cobain

The ex-Guns N’ Roses manager Doug Goldstein was asked about Duff’s reaction to Kurt’s death in 1994.

“He knew that Kurt was a fellow tortured artist. He was very upset, despondent, and I don’t know if it’s in Duff’s book or not, but Duff rode on an airplane back from Los Angeles the day before he [Kurt] killed himself.

“Duff has PTSD around the fact that he didn’t just hug him and say, ‘Come with me, don’t go to your house.’ It wasn’t that strong of an effort, it was an afterthought. But you can’t put the genie back in the bottle.”