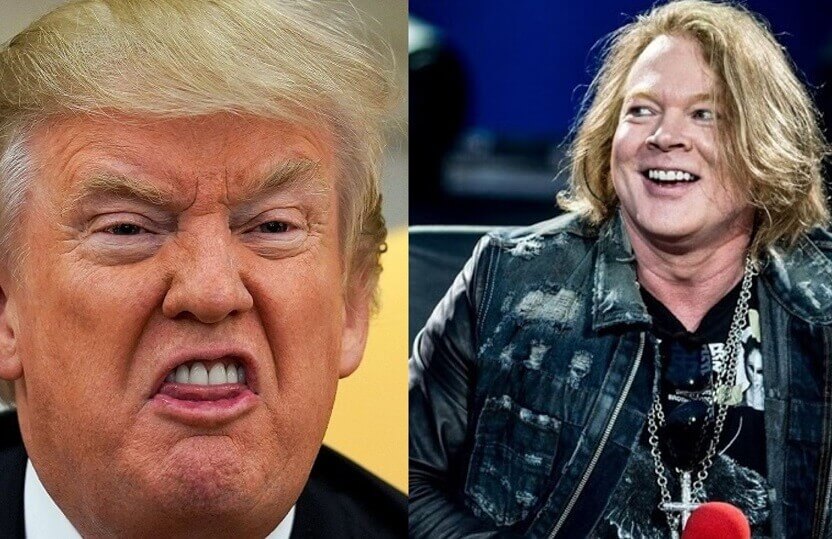 Axl Rose criticizes the country’s current president, Donald Trump. The Guns N ‘Roses leader has made that quite clear a few times and now he’s back on the subject on Twitter, pulling on a question that concerns his band.

First he talked about how Trump has used Guns songs at his rallies without the group’s permission, taking advantage of loopholes in copyright contracts to do so.

Personally I kinda liked the irony of Trump supporters listening to a bunch of anti Trump music at his rallies but I don’t imagine a lot of ‘em really get that or care.

As far as I’m concerned anyone can enjoy GNR 4 whatever reason n’ there’s truth 2 the saying “u can’t choose your fans” n’ we’re good w/that.

Having said that my personal position is that the Trump administration along w/the majority of Republicans in Congress n’ their donors that support him 4 their own agendas r doing r nation a disservice.

We have an individual in the WH that will say n’ do anything w/no regard for truth, ethics, morals or empathy of any kind, who says what’s real is fake n’ what’s fake is real.

Who will stop at nothing 4 power feeding off the anger n’ resentment he sows 24/7 while constantly whining how whatever doesn’t go his way is unfair.

Most of us in America have never experienced anything this obscene at this level in r lifetimes n’ if we as a country don’t wake up n’ put an end 2 this nonsense now it’s something we definitely will all pay hard 4 as time goes on.

Axl Rose is not the first artist to criticize the unauthorized use of his music at Donald Trump events. Names like Steven Tyler, Pharrell Williams and Rihanna have publicly urged that their songs do not pack entrepreneur-politician rallies.

Donald John Trump (born June 14, 1946) is the 45th and current President of the United States. Before entering politics, he was a businessman and television personality.

Trump was born and raised in the New York City borough of Queens. He received an economics degree from the Wharton School of the University of Pennsylvania and was appointed president of his family’s real estate business in 1971, renamed it The Trump Organization, and expanded it from Queens and Brooklyn into Manhattan.

The company built or renovated skyscrapers, hotels, casinos, and golf courses. Trump later started various side ventures, including licensing his name for real estate and consumer products. He managed the company until his 2017 inauguration. He co-authored several books, including The Art of the Deal. He owned the Miss Universe and Miss USA beauty pageants from 1996 to 2015, and he produced and hosted the reality television show, The Apprentice, from 2003 to 2015. Forbes estimates his net worth to be $3.1 billion.