Andrew Bennett, the author of the new book “Eruption in the Canyon: 212 Days & Nights with the Genius of Eddie Van Halen” that tells stories from Van Halen’s reunion with Sammy Hagar until their reunion to David Lee Roth, shared an excerpt of the book with Classic Rock magazine in which he recalls the unusual way he saw the guitarist use super glue. 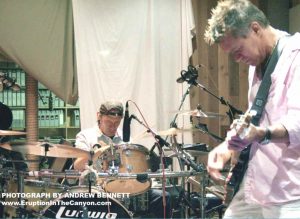 “Ed worked constantly on his guitars using screw-drivers, pliers, and small knives,” begins Bennett, “which struck me as a bit risky for a man whose living is dependent upon his hands. That said, this is the man who created the world’s most famous guitar using spare parts,” he continues. “So who was I to worry when I saw him picking away at some guitar part with a small blade.”

“I simply walked past him as he was conducting barbaric surgery on a guitar, on my way to microwave half of a burrito from a few days previous. As I stood over this sad meal, I heard a soft but emphatic, ‘Fuck.’ He walked over to where I was waiting on my depressing dinner, bleeding profusely from his hand. Without a word, he casually began rinsing it off. If that had been me, I would have been screaming in pain.”

“As he dried the water from the still-bleeding gash, I was thinking this would be the part where he got a bandage and tended to the wound properly. He did not get a bandage or tend to it properly. Instead, Ed grabbed a small bottle of super glue from a workbench and sealed the wound by super-gluing it shut. When I asked him if that was safe, he told me, ‘It’s the same thing a fucking doctor would do.’ Then he went back to the studio and shredded for nine hours.”