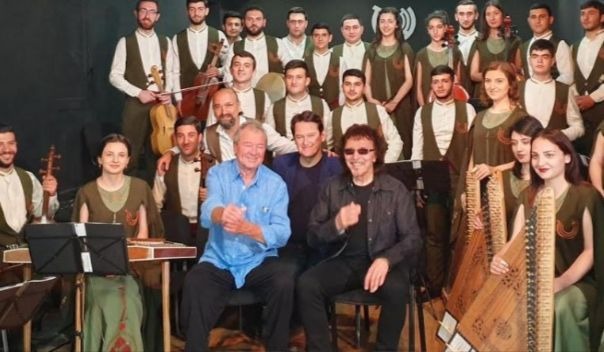 Tony Iommi and Ian Gillan were honored with a beautiful cover of Black Sabbath’s “She’s Gone.” The Naregatsi Orchestra was invited to pay tribute to the artists for their charity work in the Armenian capital Yerevan.

In 1989, the duo joined other musicians for a cover of Deep Purple’s “Smoke on the Water” to raise funds after an earthquake hit the city of Spitak in 1988. At the time, over 40,000 people died.

In 2011, Iommi and Gillan reunited, now with names like Jason Newsted (Metallica), Nicko McBrain (Iron Maiden), Mikko Lindstrom (HIM) and Jon Lord for the singles release “Out Of My Mind / Holy Water” to Rock Aid Armenia.

Gillan was the lead singer of Black Sabbath in 1983, when he recorded the album Born Again with the band.

Watch the moment when the Orchestra plays below:

Rock Aid Armenia, also known in earlier stages as Live Aid Armenia, was a humanitarian effort by the British music industry to raise money to help those affected by the 1988 Armenian earthquake.

Initiated by the international charity campaigner Jon Dee, the project comprised a number of singles, compilations and a documentary. A special record label Life-Aid Armenia Records was established for producing and distributing the releases by Rock Aid Armenia.