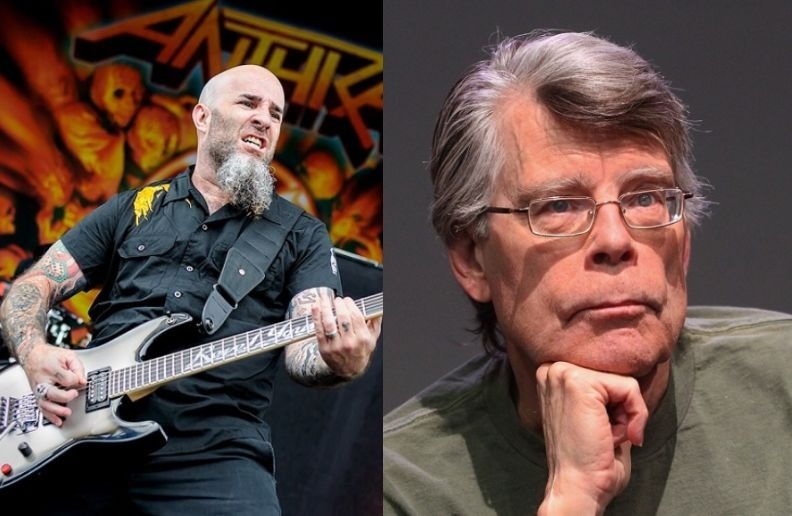 During a conversation with Metal Hammer, Anthrax guitarist Scott Ian talked about his massive collection of Stephen King’s books, remembering how he became a fan way back in the day after the first one.

How did you get into Stephen King?

“I saw the movie ‘Carrie’ when it came out [in 1976] and went right out and bought the book. I loved it. I went back to the bookstore and asked, ‘What else do you have by Stephen King?’ They were like, ‘Nothing. You have to wait for the next book to come out.'”

What exactly do you collect?

“They put out a special collector’s edition through an arrangement with Viking Press. It’s limited to 725 numbered and signed copies. He always puts out a limited edition that he usually signs and sometimes there’ll be illustrations by other artists and they’re numbered and limited to a number of copies. These are true first editions.”

What would one of those puppies set you back?

“There’s another ‘Firestarter’ limited edition that I don’t have that comes in this asbestos cover and all this other stuff, with even fewer copies made. These days, if you can even find one – because nobody who has one is selling it – it would probably be somewhere in the $8,000 to $10,000 range.”

“‘The Plant’ is the Holy Grail – it’s one of the rarest things he’s ever released. The originals were these little rexographed chapbooks. He’d write a part of the story and at Christmas-time he’d rexograph off a couple hundred copies and send them to his Christmas card list.

“There were six installments, all done by hand by him and signed. Even if that comes up for sale – which it never does – you’re talking somewhere around $20,000. It’s the coolest thing to own because it’s certainly the most personal.”

So how big is your collection?

“Let’s see… [counting for nearly two minutes] I’ll count the ‘Green Mile’ originals as one story, instead of six separate books… I think 108 books. I mean, if you just had the hardback of every novel he’s written, it’s got to be 60 books or something like that.”

Didn’t you write a foreword for one of his books?

“Yeah, this press, Overlook Connection, approached me about writing a new foreword for ‘The Stand’ because of what a big fan I am and because the ‘Among the Living’ record is so heavily influenced by that book.

“So I wrote the foreword for this edition, which was mindblowing! I like to think that Stephen King read something that I actually wrote.”

Have you ever met the man?

“No, but I hope to someday. It would be cool to just shake his hand and obviously, if I could have a conversation with him, it would be even better. I’m sure we could talk music all day.

“Even in the world of music, there’s no one bigger than him. I’ve never met Malcolm or Angus Young, but meeting Stephen King would be even bigger for me.

“Other than breathing and listening to music, reading Stephen King books is the one constant activity in my life. It pre-dates Anthrax.”