In an interview with Gazeta do Povo, a Brazilian newspaper, Alice Cooper spoke about a tour that goes until December, his new album and  criticized the weak posture of the rock bands that appeared in the last decades.

“The fire of the new bands seems to be off. They don’t want to be rockstars. When you think of bands like Aerosmith, Rolling Stones, Alice Cooper, Foo Fighters and Green Day, they know they are bands that go up on stage and break everything. The ones from new bands are introverts, with no energy. They don’t have that fire that the 70’s bands had.” 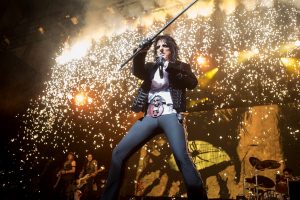 “And when asked who would have occupied the place of the great rock stars? He responds: “The big shows of the moment, the ones that speak to the heart of the audience are artists like Kate Perry or Lady Gaga. Saw her show in Las Vegas and I was very impressed. She doesn’t do the diva type, she’s a rocker, Lady Gaga rocks”.