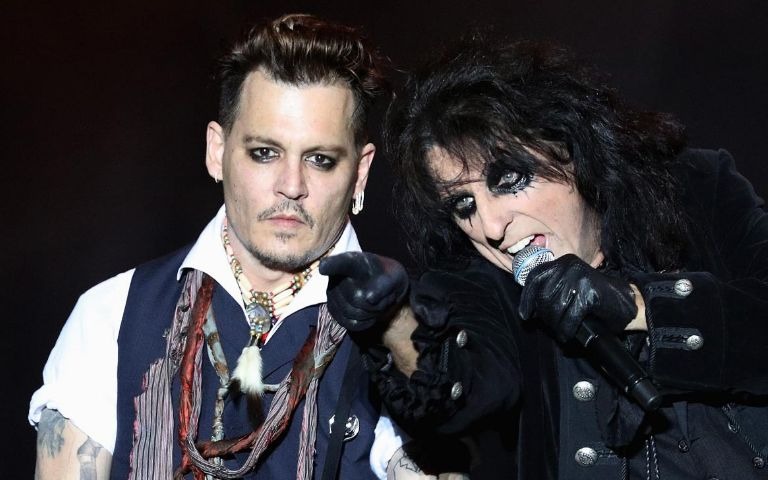 In an interview with Q105.7, Alice Cooper talked about the formation of Hollywood Vampires and Johnny Depp’s guitar skills, that are many time questioned by the press.

“I told ’em: ‘What we should do is put a bar band together. Call it Hollywood Vampires and just play songs for all of our dead, drunk friends. It was really true. All the guys we used to drink with, most of them died.”

“I thought we were going to be a little bar band. We ended up touring and doing a whole bunch of European shows that had 10, 20, 30 thousand people.”

On Johnny’s guitar skills, he said:

“Johnny’s as good a guitar player as anybody. People always kind of question Johnny’s guitar playing. I tell them: Do you know who he’s out with right now and playing in the band?

“They ask, ‘Who?’ I said, ‘Jeff Beck.’ If you’re playing with Jeff Beck, the greatest guitar player of all time, that does say something about your guitar playing.”

About the latest album, he stated:

“The album came out, the ‘Rise’ album, our second album, came out with mostly original material on it and it did really well – it was number one in, like, 15 countries. It did really well.

“What tells us is that we should start writing another album. Johnny’s making movies right now. Joe’s out with Aerosmith doing residencies [in Las Vegas], and I’m on tour until December, so we probably won’t be meeting up again until the beginning of the year.”

“Then we’ll start plotting out when the tour will be, and what the next album will be. But we will go out and tour again with the ‘Rise’ album.”