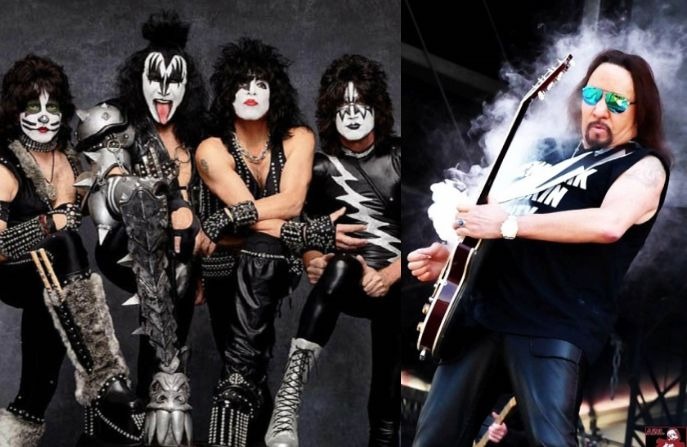 Legendary Ex-KISS guitarist Ace Frehley talked with Goldmine about the band’s farewell tour that will begin in 2019. He stated that the currently lineup is half of a cover band.

“When I read the comments the fans make on the internet – every once in a while I’ll spend a half hour or an hour reading comments – invariably 80-90% of the KISS fans want a full-blown reunion.

“I don’t know if that’s possible; it could be a variation of it. There’s no way KISS is gonna go out with a bang with the lineup they have now. It’s half of a cover band. I love Eric [Singer, drums] and I love Tommy [Thayer, guitar], but it’s half of a KISS cover band.

“Paul [Stanley] and Gene [Simmons] are the two original guys and they’ve got two guys playing my part and Peter’s [Criss] part. I think it works better overseas or in South America where the people aren’t as educated as to who is in the band, but it’s getting tired in America.

“When they made the switch between me and Tommy, they really didn’t publicize it and I don’t think they wanted to.

“I mean, that happened multiple times. My departure from the band the second time around wasn’t highly promoted.”

He also says that he would agree to play with KISS again:

“I would be up for it if the numbers were right and if it was presented to me in the right way, sure.

“It’s not necessarily something that I am craving to do, but I want to do it for the fans because the fans are the ones who made us all famous and rich and turned us into superstars.