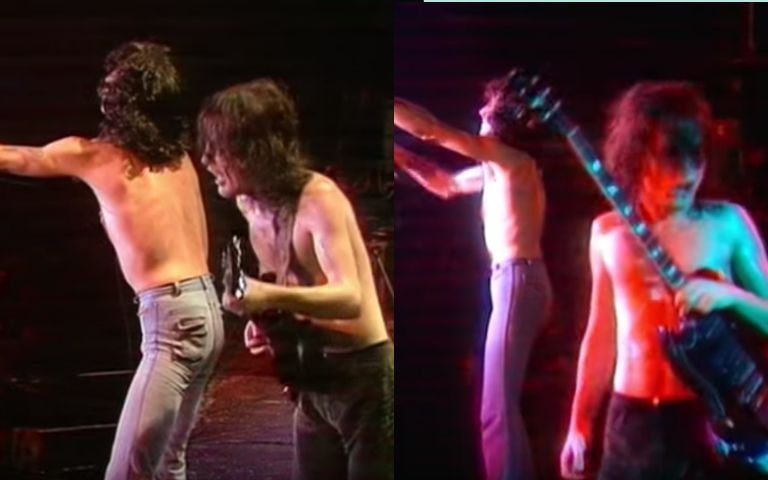 AC/DC continues to celebrate the 40th anniversary of their legendary album “Highway To Hell” releasing an unseen “The Jack” live performance. The video was recorded on July 1979 at Rijnhal in Arnhem, the Netherlands, and originally broadcast on “Countdown”, a show that ran on Dutch television between 1977 and 1993.

“Highway To Hell” was AC/DC’s last album with singer Bon Scott, who died from alcohol poisoning on February 19, 1980.

AC/DC recently reactivated its social media accounts following a two-year lull for a month-long celebration of “Highway To Hell”.

“The lyrics of “The Jack,” sometimes titled “(She’s Got) The Jack,” were developed by Scott, who was inspired by a letter Malcolm Young received during a tour of Adelaide. The letter, from a woman in Melbourne, implied that Malcolm had given her a venereal disease, although he claims that when he got tested, he was clean. Scott’s original lyrics were far more explicit than those heard on the album, which he deliberately toned down in case the song got played on radio.”

Highway to Hell became AC/DC’s first LP to break the US Top 100, eventually reaching number 17, and it propelled the band into the top ranks of hard rock acts.

It is the second highest selling AC/DC album (behind Back in Black) and is generally considered one of the greatest hard rock albums ever made. Gret Kot of Rolling Stone writes, “The songs are more compact, the choruses fattened by rugby-team harmonies. The prize moment: Scott closes the hip-grinding ‘Shot Down in Flames’ with a cackle worthy of the Wicked Witch of the West.”