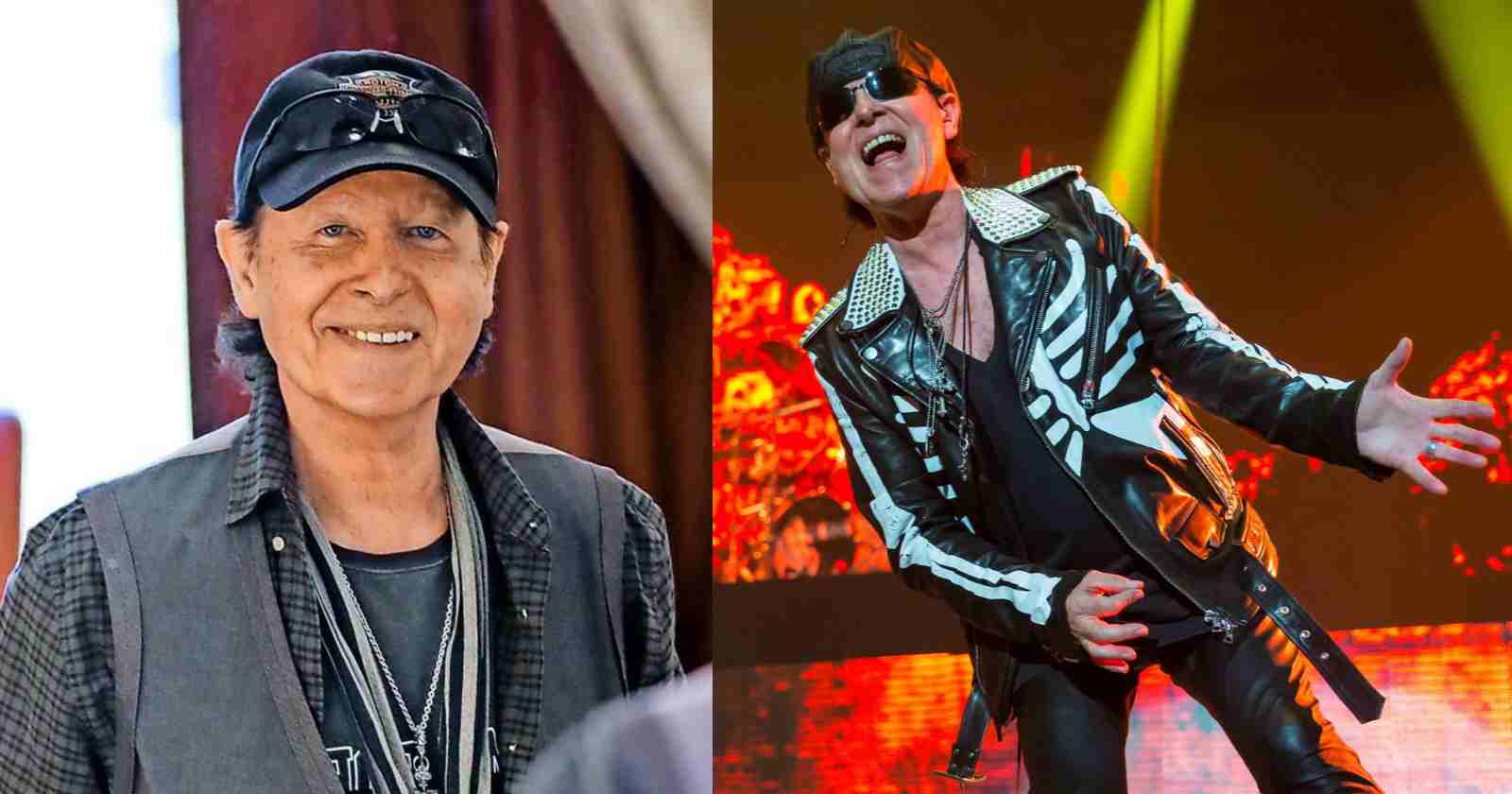 Vocalist of Scorpions, the most successful German Rock and Roll band in history, Klaus Meine who is in the group since 1969 gave voice to many Hard Rock classics like “Rock You Like A Hurricane” and “Blackout”, tracks that became favorites of many fans worlwide. In an interview with Planet Rock in 2022 on the My Planet Rocks show (Transcribed by Rock and Roll Garage), Meine listed 7 songs that are some of his favorites of all time and explained why they are so important to him.

“It’s an incredible one, all those British bands that came here to Germany in the early 60s they were so inspiring. In the end of the day they kicked in us all emotions. When we went to see The Kinks in Hannover, west Germany at the time, to see Dave Davies with his Flying V and when they played songs like ‘You Really Got Me’ we were blown away. We were young kids, they were just one generation ahead of us. But they were rocking and the crowd went totally wild.”

“It was just a great moment in time to be alive, to be a young kid, being inspired by music. By the mid-60s we were saying ‘Come on, let’s pick up the guitar, the drums, the voice and put some mattresses on the walls and crank it up’. Then we played for the first time and maybe if we were lucky we would get a little gig at the weekend.”

“One of the first songs I’ve played with my band called The Mushrooms, was way before the Scorpions was like ‘I Saw Her Standing There’ (The Beatles) and ‘Glad All Over’ from the Dave Clark Five, we enjoyed it so much. The 60s were so important and bands like The Kinks and The Who have a special place in our hearts,” Klaus Meine said.

One of the most important British bands that appeared in the 60s, The Kinks sold more than 50 million records worldwide. Some of their most famous songs are “Lola”, “You Really Got Me”, “All Day and All The Night” and “Sunny Afternoon,” David Gilmour said.

Little Richard “Rip It Up”

“I had a cousin, she was a couple years older than me. She had like a record player, that you could put 10 singles in this thing you could listen to one after the other. So when I saw her she always had the newest stuff, her girlfriends or he friends brought in.”

“That’s when I first listen to Little Richard ‘Wop bop a loo bop a lop bom bom’, you know (laughs). It opened up a whole new different world. I didn’t understand a word of course, but somehow I understood the message of Rock and Roll. It was like an invitation into a different world, the world of Rock music,” Klaus Meine said.

One of the most influential musicians in the history of Rock and Roll musician, Little Richard changed the face and the sound of music in the 50s and inspired many famous bands like The Beatles and The Rolling Stones that even were his opening act in many concerts later on.

“I heard The Beatles for the first time on BBC radio, something like ‘I Want To Hold Your Hand’, they even made a German cover of it. So I heard it on the radio and when I listened to ‘Twist And Shout’ for the first time it was not like all those years before, that we had one one star, one singer like Elvis, in the UK I guess it was Cliff Richard, so it was like a group of people and everybody could sing, maybe not Ringo (laughs).”

“But everybody in The Beatles, like when they sang together songs like ‘Twist And Shout’, wow, my hair stood up. It was so inspiring, sounded so rough. It was like an explosion of creativity, so colorful and so deeply inspiring that was an inspiration that lasted a lifetime,” Klaus Meine said.

The most successful Rock band of all time, The Beatles changed Rock and Roll in the 60s, bringing a swinging sound and inspiring other musicians to compose their own songs and write their own lyrics. They were inducted into the Rock and Roll Hall Of Fame back in 1988 by Mick Jagger, who said in his speech: “The original way they crafted their songs wasn’t lost on us.”

Klaus Meine didn’t explained his choice for this particular Deep Purple song in the interview but he praised the band over the decades and in an interview with Glide Magazine in 2015 he listed Purple as one of his main inspirations in the 70s: “Then (After the 60s) it was Deep Purple, Led Zeppelin, all these great bands. This is how it started, you know. It was very, very inspiring because we had a chance to grow up with the best music around.”

“You got hit by this whole new generation of amazing artists. Some of them are still out there, like the Rolling Stones, like a generation ahead of us, still doing great. All those bands, they gave us this inspiration to start a band,” Klaus Meine said.

Scorpions toured with Deep Purple multiple times since the 70s and in 2002 they even had an extensive United States tour that had the legendary bill: Scorpions, Deep Purple and Dio. “Space Truckin'” was first released on the most famous album of the British Hard Rock group “Machine Head” in 1972 and remains as one of their best songs.

Meine also didn’t explained why he chose the Motörhead cover of David Bowie’s classic song “Heroes” but the host said that it was Klaus Meine’s favorite song of Lemmy Kilmister‘s band. One year after the passing of the legendary bassist and singer, the Swedish drummer Mikkey Dee, who played in Motörhead from 1992 to 2015, joined the Scorpions and still is a member of the group.

Since when he joined the Scorpions, the German band often covers the classic Motörhead song “Overkill” as a tribute to Lemmy that had a great friendship with Klaus and Rudolf Schenker since the early 70s.

The Motörhead version for “Heroes” was one of the last songs recorded by Lemmy Kilmister before his death in 2015 at the age of 70. Recorded during the sessions of the band’s last studio album “Bad Magic” (2015), it was only released two years later on the posthumous record “Under Cover” (2017).

Led Zeppelin “What Is And What Should Never Be”

“Led Zeppelin means the world for us, for all of us (From Scorpions), because listening to Zeppelin I, II and whatever they released in those days, songs like ‘Whole Lotta Love’ and ‘What Is and What Should Never Be’. I had this little band before I joined the Scorpions, I played with Michael Schenker in a band called Corpernicus, this was one of the songs that we played. Michael also loved Led Zeppelin a lot. It was like a formula to the Scorpions, like being hard rocking and then playing the most beautiful ballads in the world.”

“They had this formula (Led Zeppelin) because they had a vocalist that could do that. It’s good to have a screamer in the band, like when Led Zeppelin played ‘Rock and Roll’ with Robert Plant screaming like crazy. But also he would touch you deep inside your body, they would be reaching out for your heart. This not only came through in Jimmy Page‘s beautiful composition and guitar playing, one of the kind top players. But the way Robert was singing was like how can you not be inspired by listening to a voice like this,” Klaus Meine said.

First planed to be called The New Yardbirds, after The Yardbirds came to an end and guitarist Jimmy Page wanted to form a new band, Led Zeppelin was born in London in 1968. The chemestry between Page, singer Robert Plant, drummer John Bonham and bassist/keyboardist John Paul Jones made the group become one of the best-selling bands of all time that made Rock and Roll sound heavier than it ever was.

Klaus Meine also didn’t explained in the interview why he chose Aerosmith‘s “Dream On” but he is a great friend of the American musicians and even watched a Rolling Stones concert with Steven Tyler as he recalled in an interview with RP Online in 2015. The concert happened in Waldbühne Berlin and Meine recalled, saying: “I was there with Steve Tyler from Aerosmith. I said: ‘Look at that Jagger, he’s 70. That’s awesome, man!” Steve Tyler replied, ‘I am 66.’ Then I: ‘Me too.’ Well, that’s it.”

Released on the band’s 1973 self-titled debut album, “Dream On” remains as one of Aerosmith’s most famous songs.