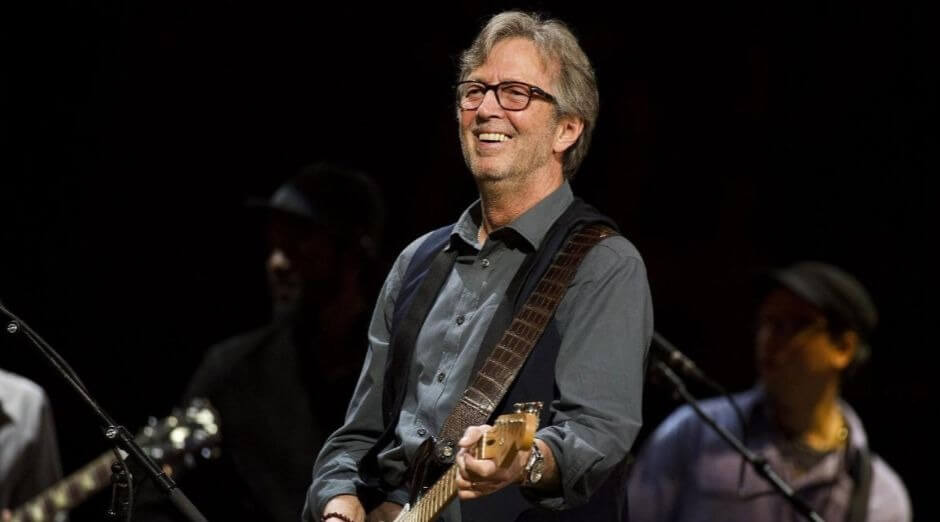 Eric Clapton is considered one of the best guitarists of all time and was inspired in many musicians he praised through the years. Almost all of them has blues roots, Clapton’s favorite music genre. Almost all of them worked with the guitarist or were re-recorded by him.

For Eric Clapton, the greatest guitar solo of all time was made by the late Duane Allman for Wilson Pickett’s cover of “Hey Jude”. The song was recored before the Allman Brothers Band existed.

“I remember hearing ‘Hey Jude’ by Wilson Pickett. Then calling either Ahmet Ertegun or Tom Dowd and saying, ‘Who’s that guitar player? I just filed it away. To this day, I’ve never heard better rock guitar playing on an R&B record. It’s the best.” He even invited Allman to play on Derek & The Dominos album.

Eric Clapton used to call Muddy Waters his father. He took him as “special guest star” on his 1979 stadium tour. Muddy’s final public appearance was a walk-on last June 30th at a Clapton concert in Miami. He played “Blow Wind Blow,” a blues he’d recorded in the early Fifties. The crowd knew it because Clapton often performed it. However, Clapton wouldn’t dare play it, let alone sing it, when Muddy was around.

In an interview with Music Radar Clapton talked about Robert Johnson‘s legacy: “When I first listened to him I was completely overwhelmed by his vulnerability. What struck me more than anything else was how in touch with his feelings he was. That is something that’s taken for granted today – there are so many different ways these days to get in touch with your feelings. Either through therapy or support groups. But back in the early sixties, when I first heard him, the culture in England and the US was much more repressed.”

“There were very few people on record who sounded like they were singing from the heart. Or knew who they were or what they felt. Most were just imitating other people or developing something for the stage. Music, for the most part, was very artificial. Even people I loved, like [the blues pianist] Leroy Carr or [Delta bluesman] Son House, still sounded like entertainers to me.”

“Robert was something else – he sounded like he was naked. I don’t know if this is true or not. But it was reported by Don Law, the man who recorded him, that prior to one of his sessions there were some Mexican musicians in the room with him. So it seems he couldn’t play in front of them – he had to turn and play to the corner of the room. And I thought, That makes sense. How could he play in front of other people when he’s exposing his emotions so entirely?”

“I’d never heard anyone do that before. All the music I’d heard up until that time was just pop music made for entertainment. So Robert Johnson wasn’t entertainment. When I first heard him I had a very hard time listening to him. Because it demanded something of me.”

Jimi Hendrix played with Cream in Regent Street Polytechnic’s concert. He plugged the bass amp, and played Howlin’ Wolf’s “Killin’ Floor”, a track that Clapton was having a hard time playing.

Clapton wrote on his autobiography about this moment: “Everyone was gobsmacked. I remember thinking that here was a force to be reckoned with. It scared me because he was clearly going to be a huge star, and just as we were finding our own speed, here was the real thing.”

Back in 2016 when Prince died, Eric Clapton praised the guitarist and singer, saying: “I’m so sad about the death of Prince,” he wrote. “He was a true genius, and a huge inspiration for me, in a very real way..In the the eighties, I was out on the road in a massive downward spiral with drink and drugs, I saw Purple Rain in a cinema in Canada, I had no idea who he was. So it was like a bolt of lightning! In the middle of my depression, and the dreadful state of the music culture at that time it gave me hope, he was like a light in the darkness.”

In an interview Eric Clapton was questioned about John Mayer’s version for “Magnolia”. He said Mayer is “extremely gifted, his facility is phenomenal. He is a master. I don’t think he even knows how good he is. He nailed “Magnolia”. It’s so sensitive.”

Lee is known for his fingerstyle technique. He has worked, both in the studio and on tour, with many famous musicians, in a wide range of musical genres. He also has a solo career and is a famous composer and music director.