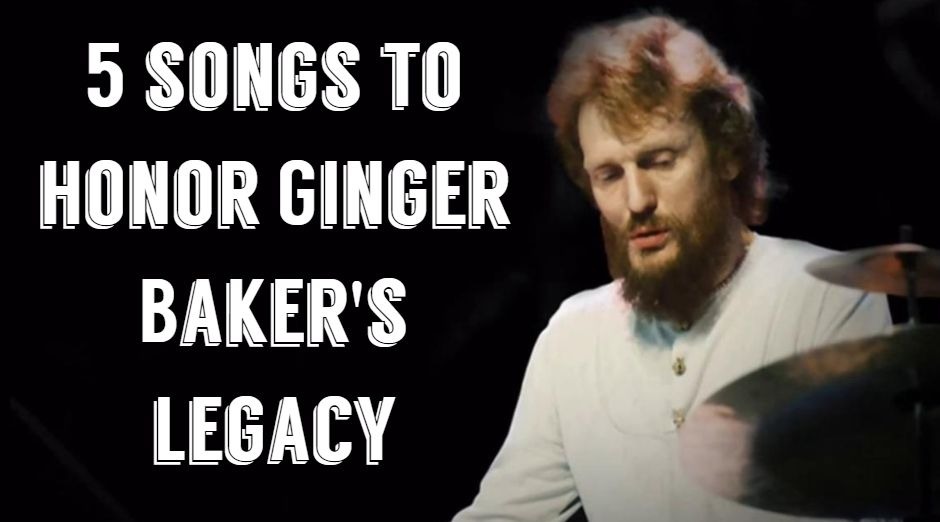 Ginger Baker was one of the best drummers of all time and changed rock history with Cream and many other groups. He unfortunately died at 80 and to honor his legacy we prepared a list with 5 great songs with him.

An amazing instrumental song by Cream that was released on their 1966 debut album, Fresh Cream.

The tune was composed by Ginger Baker and it is a five-minute drum solo (with a brief guitar and bass introduction and ending), and is considered one of the first drums solos in the history of music.

The solo show drum patterns that are built up, varied, and then dropped, giving way to a new pattern. On the piece, Baker often produced complementary rhythms on the hi-hat, ride cymbal, double-bass drums and tom-toms simultaneously.

In one of the best versions for the classic “Crossroads”, Ginger Baker presents an amazing rythm. The song became a part of Cream’s repertoire when Eric Clapton began playing with Jack Bruce and Ginger Baker in July 1966.

The song “I’m So Glad” is a Delta blues-style song from the American musician Skip James, recorded in 1931.

Cream transformed the tune into a blues rock song, recording on September 1966 and released on their debut album, Fresh Cream, also performing the song live.

To the surprise of many, especially Clapton, he and Baker soon rejoined another supergroup, Blind Faith, which also had keyboardist and singer Stevie Winwood and bassist Ric Grech.

According to Clapton, he and Winwood were playing informally when Baker appeared (the drummer claimed Clapton had invited him). They were named Blind Faith by Clapton himself.

There were high expectations for the ensemble from the moment it premiered in June 1969 at a concert for 100,000 people at Hyde Park in London.

The band formed in late 1969 upon the disbandment of Blind Faith. The original lineup consisted of Ginger Baker on drums, Steve Winwood on organ and vocals, Ric Grech on violin and bass, Jeanette Jacobs on vocals, Denny Laine on guitar and vocals, Phil Seamen on drums, Alan White on drums, Chris Wood on tenor sax and flute, Graham Bond on alto sax, Harold McNair on tenor sax and flute, and Remi Kabaka on percussion.