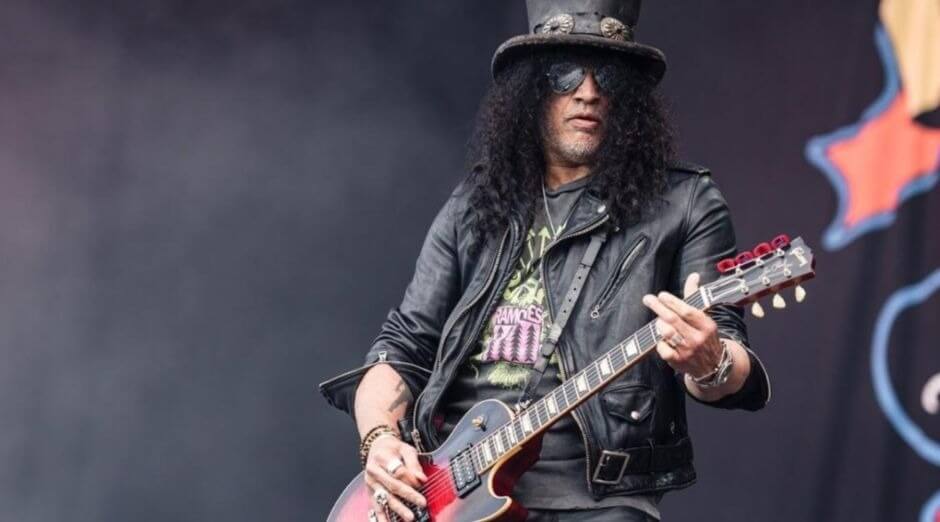 Guns N’ Roses guitarist Slash revealed the 5 songs he would choose to hear at the end of the world in an interview with CNBC back in 2015. The musician chose classics and b-sides from some of his favorite bands of all time. He also revealed his favorite GN’R song of all time.

The 5 songs Slash would choose to hear at the end if the world:

“Can’t You Hear Me Knocking” was released by Rolling Stones on the 1971’s album Sticky Fingers. The song is over seven minutes long, and begins with a Keith Richards open-G tuned guitar intro. According to Keith Richards, the song “Came out flying. I just found the tuning and the riff and started to swing it. Charlie picked up on it just like that, and we’re thinking, hey, this is some groove. It was smiles all around. So for a guitar player it’s no big deal to play, the chopping, staccato bursts of chords, very direct and spare.”

“Nobody’s Fault” is from Aerosmith, one of Slash’s favorite bands. The song was released in 1976 on the album “Rocks”, the fourth studio album by the band. It is one of the most acclaimed albums by the public. In addition, back in 2003, the album was included in Rolling Stone magazine’s list of 176 of the 500 Best Albums of All Time.

“Whole Lotta Love” was released by Led Zeppelin as the opening track for their second studio album Led Zeppelin II on November 7, 1969. It was originally recorded in several studios in New York and Los Angeles during the band’s second US tour and produced by Jimmy Page at Olympic Studios in London. Besides that, it was ranked 75th on the list of the 500 best songs ever by Rolling Stone Magazine.

“Fat Bottomed Girls” is a single released by Queen in October 1978 along with “Bicycle Race”. Written by Brian May, the tune was performed at the band’s concerts until 1982. Although it caused some controversy for its lyrics, it sold more than 250,000 copies in the United Kingdom. The music video for the song was filmed at the Dallas Convention Center in Texas in October 1978.

“I would have to say for Guns N’ Roses my favorite song was always ‘Paradise City’ just because it was just a great fun song, you know. Not necessarily the best song we ever did, but just a really good representation of what the band’s about,” Slash said. In addition, it still ranked 453 on the list of the 500 greatest sounds of all time in Rolling Stone magazine.

Half of the Paradise City video clip was filmed at Giants Stadium in New Jersey, when they were on tour with Aerosmith. After that, the other half of the band members are seen aboard the Concorde jet, going to England where the Monsters festival would be held. of Rock. There it happened the tragic accident in which two fans died trampled. So Guns N ‘Roses decided to put parts of that concert in the clip, as a sign of respect and mourning for the people who died there. In addition, Duff McKagan can be seen with an Aerosmith T-shirt on the set.