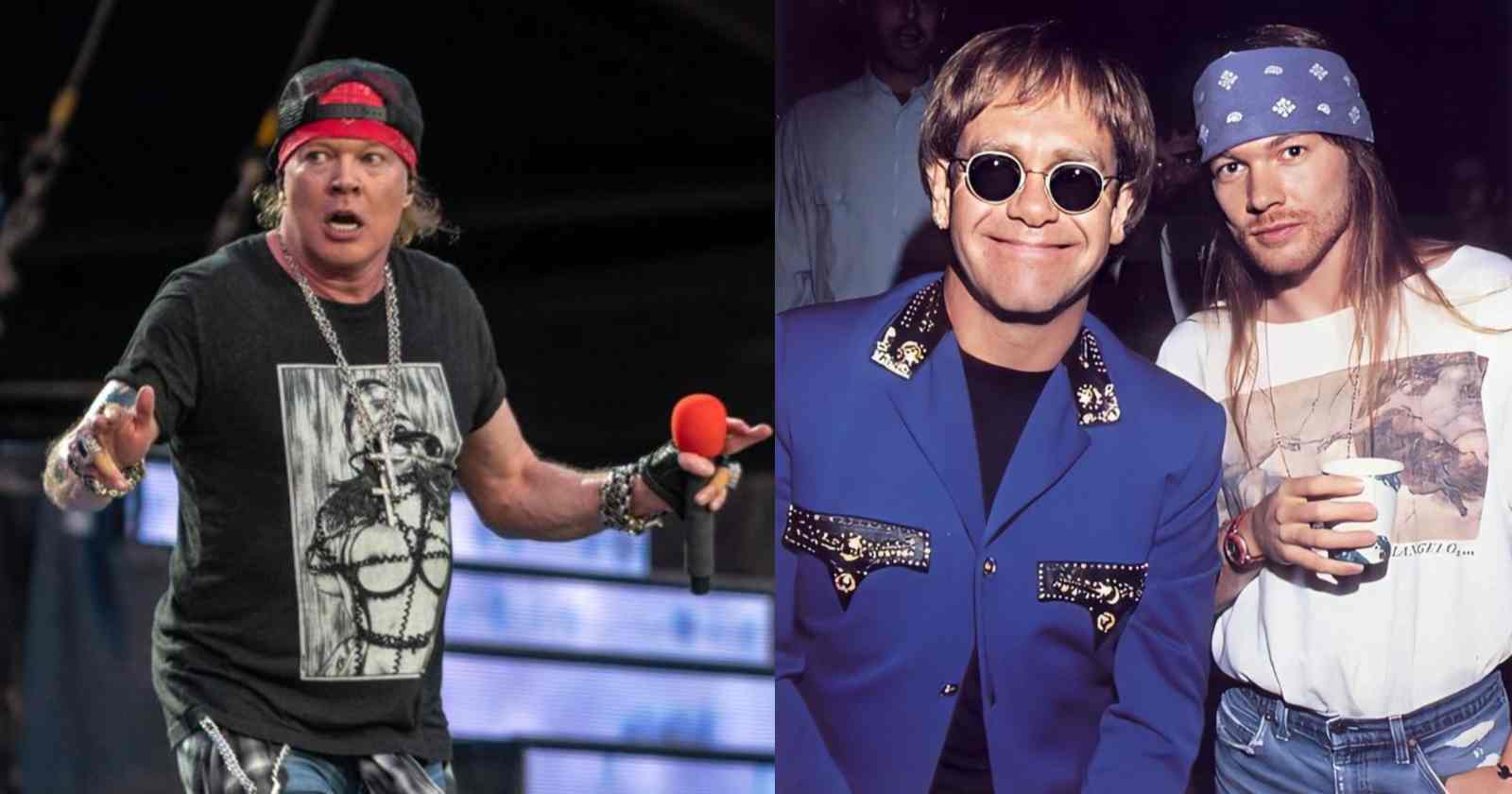 The Guns N’ Roses singer Axl Rose, who also briefly toured with AC/DC back in 2016 has a broad taste in music, that can be seen in his heaviest songs and ballads. Back in 2014 after being elected the greatest singer of all time (Due to Vocal Range and Lowest Notes) on a list by Concert Hotels, Axl Rose that doesn’t give many interviews decided to speak and in a letter to Spin magazine he said the recognition was flattering and humbling but in his opinion there were many other singers that were better than him and he listed some of them.

18 singers that Guns N’ Roses Axl Rose listed as some of his favorites:

“If I had to say who I thought the best singers were, I’d say first that I don’t know there’s a definitive answer as in my opinion it’s subjective, and second that my focus is primarily rock singers. That said, I enjoy Freddie Mercury, Elvis Presley, Paul McCartney, Dan McCafferty, Janis Joplin, Michael Jackson, Elton John, Roger Daltrey, Don Henley, Jeff Lynne, Johnny Cash, Frank Sinatra, Jimmy Scott, Etta James, Fiona Apple, Chrissie Hynde, Stevie Wonder, James Brown and a ton of others and would rather hear any of them anytime rather than me!”

Considered one of the best singers of all time due to his four-octave vocal range, Freddie Mercury made history as Queen’s vocalist. He wrote many of the bands hits like “We Are The Champions”, “Don’t Stop Me Now” and “Bohemian Rhapsody”.

Called the “King of Rock and Roll”, Elvis Presley was born in January 8, 1935 and died August 16, 1977. The singer became one of the most important cultural icons of the 20th century. The singer inspired a whole generation of musicians that would become successfull in the following decades.

Some of his most famous songs are “Can’t Help Falling In Love”, “Jailhouse Rock” and “Hound Dog”.

The Beatles bassist and singer Paul McCartney is considered one of the best songwriters and musicians of all time. McCartney was responsible for many classics of the Fab Four and several other hits in his solo career, including “Live and Let Die” that was covered by Guns N’ Roses.

Born in Dunfermline, Scotland back in 1946, Dan McCafferty was Nazareth’s vocalist from 1968 until his retirement in 2013 from the group, since he continued to perform solo. McCafferty was the voice of many classics of the band like “Hair of the Dog” (Covered by Guns N’ Roses in their 1993 album “Spaghetti Incident?”), “Love Hurts” and “Love Leads to Madness”.

Born in Port Arthur, Texas back in 1943, Janis Joplin is considered one of the best singers of all time that unfortunately died to soon at the age of 27 back in 1970. Janis was posthumously inducted into the Rock and Roll Hall of Fame in 1995.

Some of her most famous songs are “”Me and Bobby McGee”, “Piece Of My Heart” and “Cry Baby”.

Alson known as the King of Pop, Michael Jackson was born in Gary, Indiana back in 1958 and started to sing when he was still a child with his brothers in the group Jackson 5, later pursuing a successful solo career that made him one of the most important icons in pop culture.

He was the most awarded music artist in history and also one of the best selling artists of all time with estimated sales of over 400 million records worldwide. In addition, guitarist Slash, Axl Rose’s badmate, recorded with Michael Jackson the song “Give In To Me” from the album “Dangerous” (1991).

Nominated 34 times, Elton won the Grammy Awards on 5 occasions. Besides, Elton was inducted by Axl Rose into the Rock and Roll Hall of Fame back in 1994. At the time, Axl Rose said: “No one has been there more for inspiration than Elton John”.

Roger Daltrey (The Who)

Born in East Acton, London back in 1944, Roger Daltrey is one of the most important British singers of all time that made history as The Who’s vocalist. The group also is considered one of the most influential rock bands of the 20th century and have sold over 100 million records worldwide. Although drummer Keith Moon and bassist John Entwistle died back in 1978 and 2002, respectivly, Roger Daltrey and guitarist Pete Townshend continued to tour around the world and released a new album back in 2019.

The group also was inducted into the Rock and Roll Hall of Fame back in 1990 by U2. The Irish singer Bono said about the band at the time: “More than any other group that ever was, The Who were our role models”.

Born in Gilmer, Texas back in 1947, the multi-instrumentalist Don Henley, known as The Eagles drummer and singer sang the lead vocals on many hits like “One of These Nights”, “Hotel California”, “Life in the Fast Lane” and “The Long Run”.

The Eagles sold over 150 million albums worldwide and won six Grammy Awards. They also were inducted into the Rock and Roll Hall of Fame back in 1998.

Formed in Birmingham back in 1970, ELO had the songwriters and multi-instrumentalists Jeff Lynne, Roy Wood and Bev Bevan. They mixed classic arrangements and pop rock music. After Wood’s departure in 1972, Lynne became the band’s sole leader, arranging and producing every album while writing nearly all of their original material.

During ELO’s original 13-year period of active recording and touring, they sold over 50 million records worldwide. Some of their most famous songs are “Mr. Blue Sky”, “Telephone Line”, “Livin’ Thing” and “Evil Woman”.

Cash had rebelliousness coupled with an increasingly somber and humble demeanor, free prison concerts. Besides a trademark all-black stage wardrobe which earned him the nickname “The Man in Black”.

Born in Cleveland, Ohio back in 1925, Jimmy Scott was a Jazz vocalist known for his high natural contralto voice and his sensitivity on ballads and love songs. After success in the 1940s and 1950s, Scott’s career faltered in the early 1960s. He slid into obscurity before a comeback in the 1990s.

His unusual singing voice was due to Kallmann syndrome, a rare genetic disorder that limited his height to 4 feet 11 inches (150 cm) until the age of 37, when he grew by 8 inches (20 cm). The syndrome prevented him from reaching classic puberty and left him with a high voice and unusual timbre.

Some of his most famous songs are “Sycamore Trees”, “On Broadway” and “Sometimes I Feel Like a Motherless Child”

The youngest singer listed by Axl Rose, Fiona Apple was born in New York City back in 1977. Nominated 11 times, Fiona won the Grammy Award on 3 occasions.

Among her most famous songs are “Criminal”, “Paper Bag”, “Across The Universe” and “I Want You To Love Me”.

Born in Akron, Ohio back in 1951, Chrissie Hynde is the vocalist and guitarist of the successful rock band The Pretenders. Founded back in 1978 the band also had Pete Farndon, James Honeyman-Scott and Martin Chambers.

Some of their most famous songs are “Don’t Get Me Wrong”, “Back On The Chain Gang” and “I’ll Stand By You”.

Some of the most famous songs of his career are “Superstition”, “For Once In My Life” and “Sir Duke”.

James Brown was an American singer, songwriter and dancer. A major figure of 20th-century music, he is often referred to by the honorific nicknames “Godfather of Soul”, “Mr. Dynamite”, and “Soul Brother No. 1”.

Brown was inducted into the first class of the Rhythm & Blues Music Hall of Fame in 2013 as an artist and then in 2017 as a songwriter.